Okay, I'm looking at it, still in its packaging, Johnny Lightning's MAGNAs '71 Mustang Boss 351. JL on the back of the package says it is 1/43, described as "the collector's dream." This is just one model in a whole series. Here's mine:
IMG_3250.JPG[attachment=1]IMG_3250.JPG
Right now I can sell it for about what I paid for it. If I take it out of the package, it falls at least 50%. Here's my question: Is this model good enough to keep, is it really that much better than any other Mustang model?
You do not have the required permissions to view the files attached to this post.
Top

It's a piece of crap. But, being the generous guy that I am I'll allow you to send it to me so you won't be embarrassed by owning it. I'll even cover the postage.

I don't think anyone else has done this exact car in 1:43. That might be what makes it valuable to Mustang collectors. As for the model, I don't know about its quality but if you can sell it well you might want to look out for a cheaper replacement.
My collection
Top

Here's a sealed version in the USA at $4.99 with no bids and only 2 days to go. At that price, you could buy one to open and keep one sealed.

Here's a good comment in MODEL AUTO REVIEW, from a few months ago

Ever since Frank wrote about his 1968 Camaro in MAR Online, I have been meaning to fill in the story of these 1:43 Magmas. They were made by Johnny Lightning when they were owned by Playing Mantis. On the back of the blisterpacks, the copyright date is 1999 on the ones I have. They were all identified by name on the black plastic base on which they were attached in the blisterpack. Because they are much larger than the typical 1:64 scale Johnny Lightnings, I think collectors have ignored them, and I can find out nothing online about them. However, many are still for sale online on the secondary market.

The back of the blisterpack lists five 1960’s muscle cars plus a strange mix of three other vehicles. These were meant for the US market and sold in the typical large box stores at the turn of the century. Something happened in the late 1990s in the US – I am not sure why or how it started – but there was a large selection of 1:43 muscle cars for sale next to all the typical Matchboxes and Hot Wheels. All were from US-based companies. I was amazed back then and bought a few of each: Johnny Lightning Magmas, Hot Wheels Collectibles, Road Champs (Road Champions), and ERTL American Muscle. Before long, they were gone from the store aisles, so I never did buy the rest of them. I assume they did not sell as well as the 1:64s so they were soon discontinued. Too bad for an American 1:43 collector like me…

I have this one in green, but I have also seen them in teal (or light blue). This is the same casting that Frank showed in his MAR Online article. The first generation Camaro had a wheelbase of 108 in. so this model comes out exactly 1:43rd scale. Some online commenters have thought the Magmas were smaller than 1:43.


All the Magmas have a heavy diecast body with a very shiny chrome baseplate. All the hoods open to reveal good engine detail. The wheels are chrome Cragar-type wheels and the tires non-descript hard plastic. Chrome details are nicely printed on so the only let-down may be the tires.

That last line "So Johnny Lightning got it right again at 1:43 scale!" convinced me. This Mustang is going into my collection. I may even look around from the Camaro.
Top

And here it is! Fresh out of its packaging. . .
[/attachment]
IMG_3290.JPG
IMG_3285.JPG
I think I may look further into these Johnny Lightning MAGMAs. . .
You do not have the required permissions to view the files attached to this post.
Top

Nice, certainly different from other '71s in 1:43.
My collection
Top

I remember seeing these in the store but was not into 1:43 at the time.

I always like the plastic bumper version of this Mustang and was lucky to buy this Premium X for $15 last year at the end of year sale. 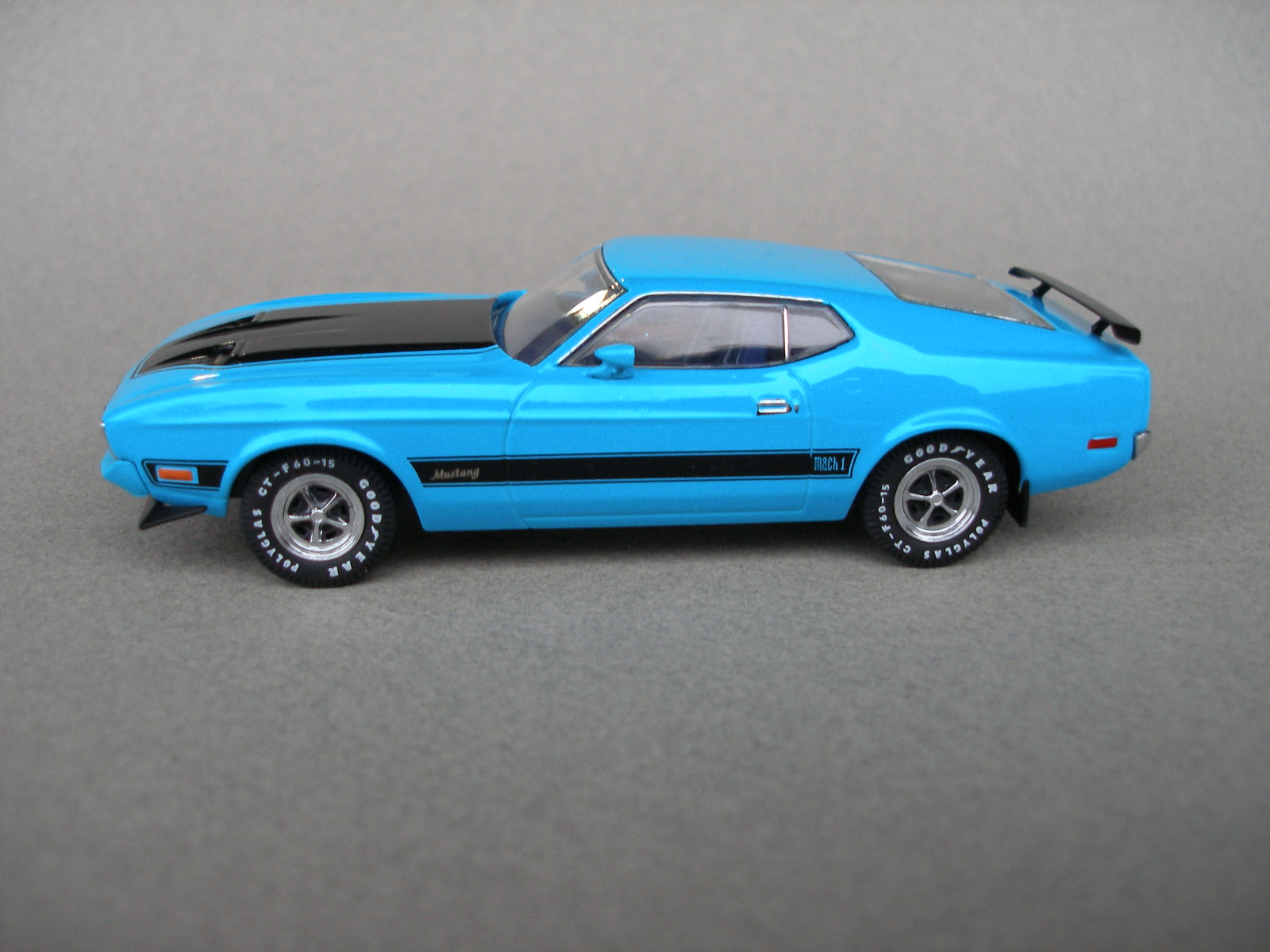 I always like the plastic bumper version of this Mustang and was lucky to buy this Premium X for $15 last year at the end of year sale.

Where is that $15 dollar sale this year? They're showing 30% off...not bad but not great either! By the way, Happy Thanksgiving Jeff

You Can LIVE in a Car, But You Can't DRIVE a House
Top

Thanks for the good pictures of the blue version, gentlemen. While I prefer the black/silver, this one looks good too. I think the front spoiler down below looks better, or at least less obtrusive, on yours. Keep 'em coming! David
Top
Post Reply
10 posts • Page 1 of 1