Great collection. I hope you'll come back and tell us more about some of these cars. What's the white convertible on the top shelf.
“Racing is life. Anything before or after is just waiting.” - Steve McQueen
Top

What's the white convertible on the top

That’s a works Sunbeam Alpine that Moss shared with Jack Brabham in the 1961 Riverside 3 hour production car race. 3rd o’all, 1st in class. A Racing Models production, I don’t know who made it for them. 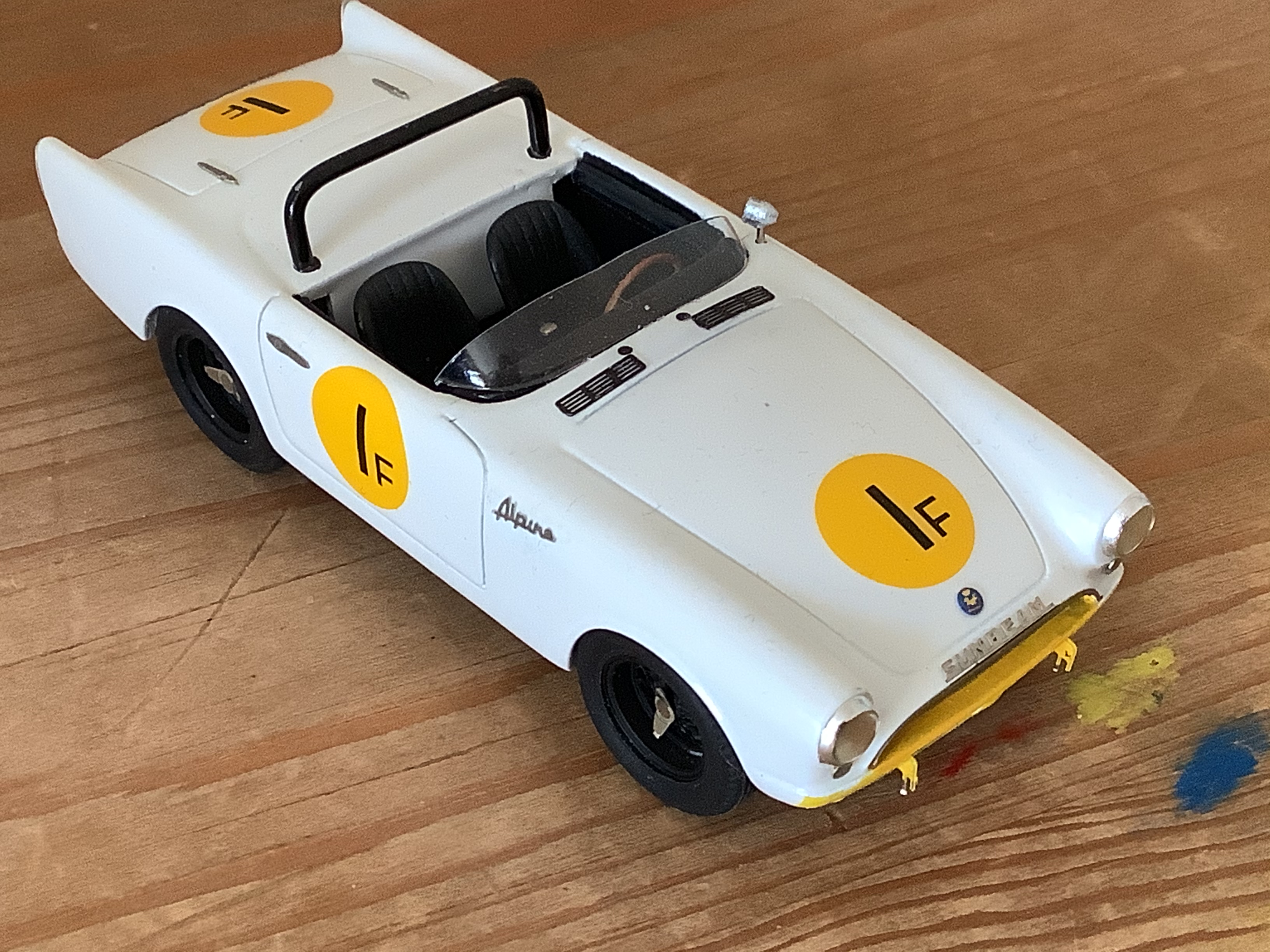 This is from “All My Races” by Sir Stirling and Alan Henry. Essential reading.
I think I’m getting the hang of things now Tom. Thanks 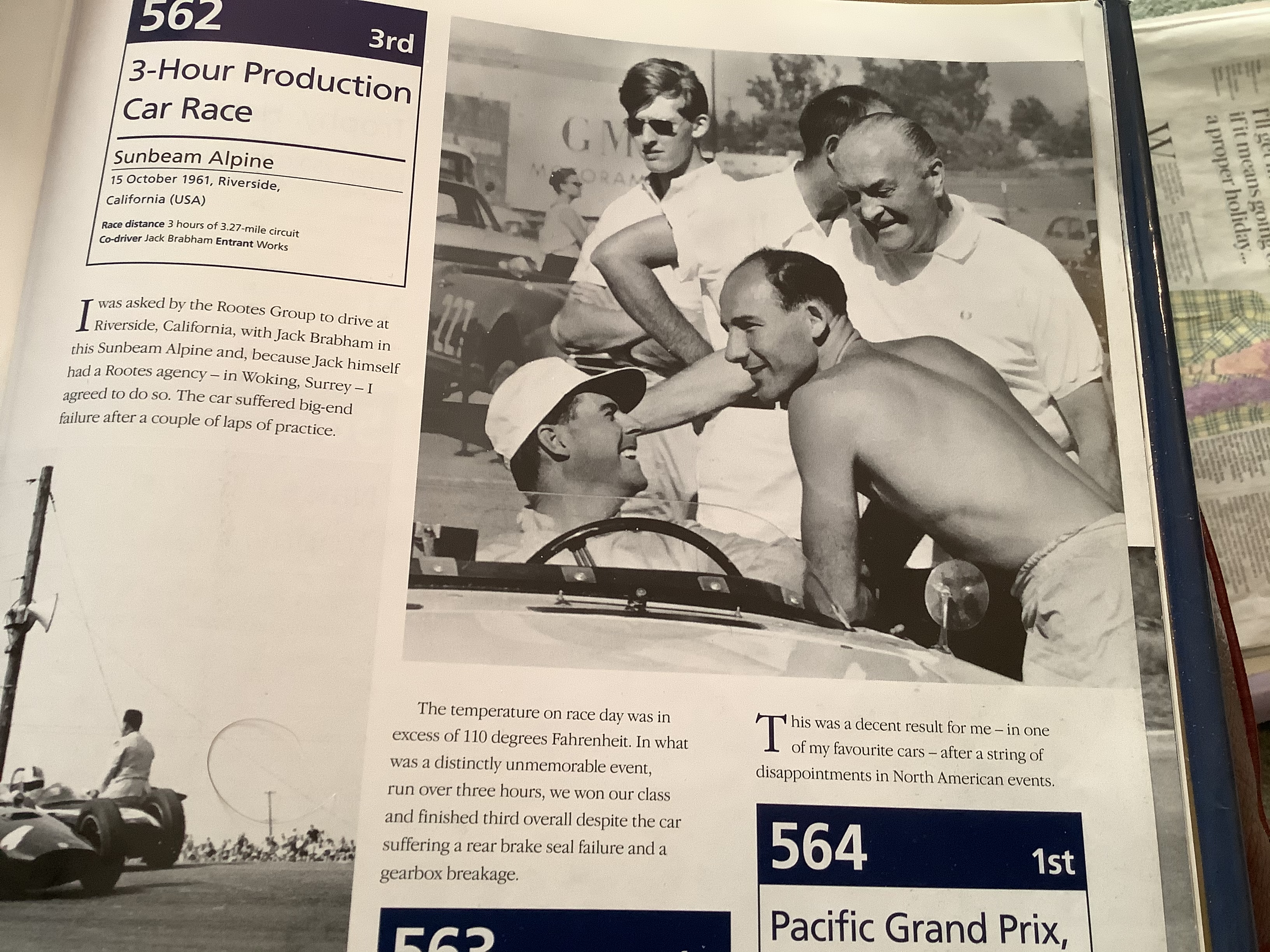 2 cracking pics. The sunbeam is a beauty
Top

Love the Alpine!
My collection
Top

Nice to see the close up of the Sunbeam. I never realised Moss and Brabham had shared a car together.
“Racing is life. Anything before or after is just waiting.” - Steve McQueen
Top

I never realised Moss and Brabham had shared a car together.

Allegedly Moss’s car blew up and he was sitting on the pit wall when the Rootes competition manager with an eye to the PR potential told him to share with Brabham.
Top

I never realised Moss and Brabham had shared a car together.

Allegedly Moss’s car blew up and he was sitting on the pit wall when the Rootes competition manager with an eye to the PR potential told him to share with Brabham.

The Racingsportcar page gives a slightly different picture Stewart. It seems Moss and Brabham were entered in two separate Sunbeams (Brabham in #1 from Brabham Motors and Moss in #2 from Bellew Imports), but these cars didn't arrive. The pair were then put together in another Sunbeam (the one modeled here) entered by Bud Rose Imports. Most of the other cars were only entered for a single driver, though there were a handful of other cars driven by two drivers.

In fact there were more cars entered that did not arrive than actually started the race, including a 3rd Sunbeam entered for Lew Spencer by Rootes Motors Inc. I wonder if there is more to the story.

https://www.racingsportscars.com/entry/ ... 0-15a.html
“Racing is life. Anything before or after is just waiting.” - Steve McQueen
Top

Bit confusing but your link was for a sports car race on the 14th whereas I believe the model is of a works Alpine from the production car race on the 15th as per “All my races”. More digging needed! https://www.racingsportscars.com/result ... 0-15a.html
(Same event as linked in my previous post, but by sorted by results rather than entries)

To me, it looks like the Grand Prix was the main event on the Sunday and the other two events were supporting races on the Saturday.
“Racing is life. Anything before or after is just waiting.” - Steve McQueen
Top

I’ve just spent the morning looking at much the same and confusion still reigns! It’s a shame the results don’t give the number for their car. Also it doesn’t record the number of laps for the stated 3rd place #36 car, nor a time. All the Moss related books have them finishing 3rd overall but they also may have got the dates the wrong way round! The site I found has the programme for the events over that Labour Day weekend 13, 14, 15th but nothing re the 3hr race. Somewhere I have read Stirling’s detailed account of how after his practise blow up he was not that chuffed to be stuck into the other car by Norman Garrard, who is in the photo, but can’t yet find it!
Fascinating stuff, love it.
Top 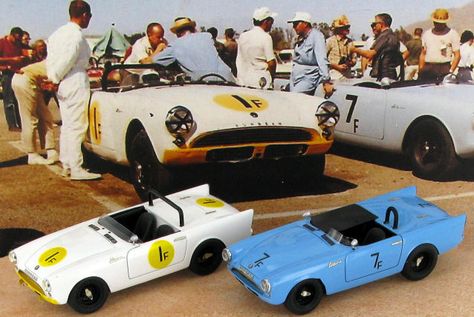 Another pic, more confusion as it shows the Moss car to be #7 not #2 as per the entries!
BTW 13/10/61 was a Friday presumably practise day, with races on the Saturday and Sunday.
Top

http://davemacdonald.net/gallery/closeu ... de1961.htm
Don’t know if this link to the programme etc will work
Top

Of course Moss and Brabham also famously won the 1958 Nurburgring 1000kms together in an Aston Martin.
Moss actually drove 36 of the 44 lap race which lasted more than seven hours. He reckoned it took a week to recover!
Top
Post Reply
41 posts