British roads have history. Some were built by the Romans. British road investment being what it is, they have only been re-surfaced a few times since.
Top

Sometimes one is enough but usually two
Andy

British roads have history. Some were built by the Romans. British road investment being what it is, they have only been re-surfaced a few times since.
Top

I usually use a white primer coat and then acryllic paint by brush.
Jerry
Old Irish Racing
www.oldirish.com

Recently I wrote an article for our model club magazine which might be of interest to others here on the forum. Some have already been mentioned previously but here is my story;

F is for FIGURES 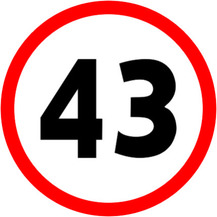 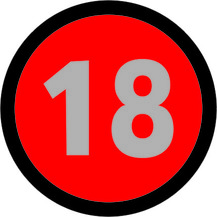 Quite rightly we all take a great deal of delight in writing about our individual model purchases, be it 1:43rd or 1:18th scale, or any other scale that takes your fancy. Usually these are the vehicles we enjoy or simply have enormous passion for. However, I think it timely having last month had “F” as our monthly theme to bring into the fold other items associated with these scales, items that complement the vehicles we collect. Personally, I think these pieces have huge importance insomuch they can bring a display of cars, lorries, buses; whatever you collect, to life.

In the seventies like many of us I grew up with Airfix and in particular their Napoleonic figures. In those days I was fascinated with all the different colours of the uniforms of the infantry, cavalry or artillery. I took tremendous gratification in painting these figures to the best of my ability and in some ways was pleasantly surprised with the results I managed to achieve. Unfortunately, those figures have disappeared goodness knows where over time, but I never forgot the pleasure I got in turning out a reasonably decorated figure.

Subconsciously I think those early self-taught painting sessions gave me confidence to start painting 1:43rd sized figures, something I have dabbled in for some time now. I find the whole exercise very therapeutic as long as you do not set tight time scales for completion. Painting figures has to be a long-accepted process for best results. A little bit but often is the key. I will freely admit I am no expert by any stretch and learn new skills on a daily basis. Below are some of my attempts. 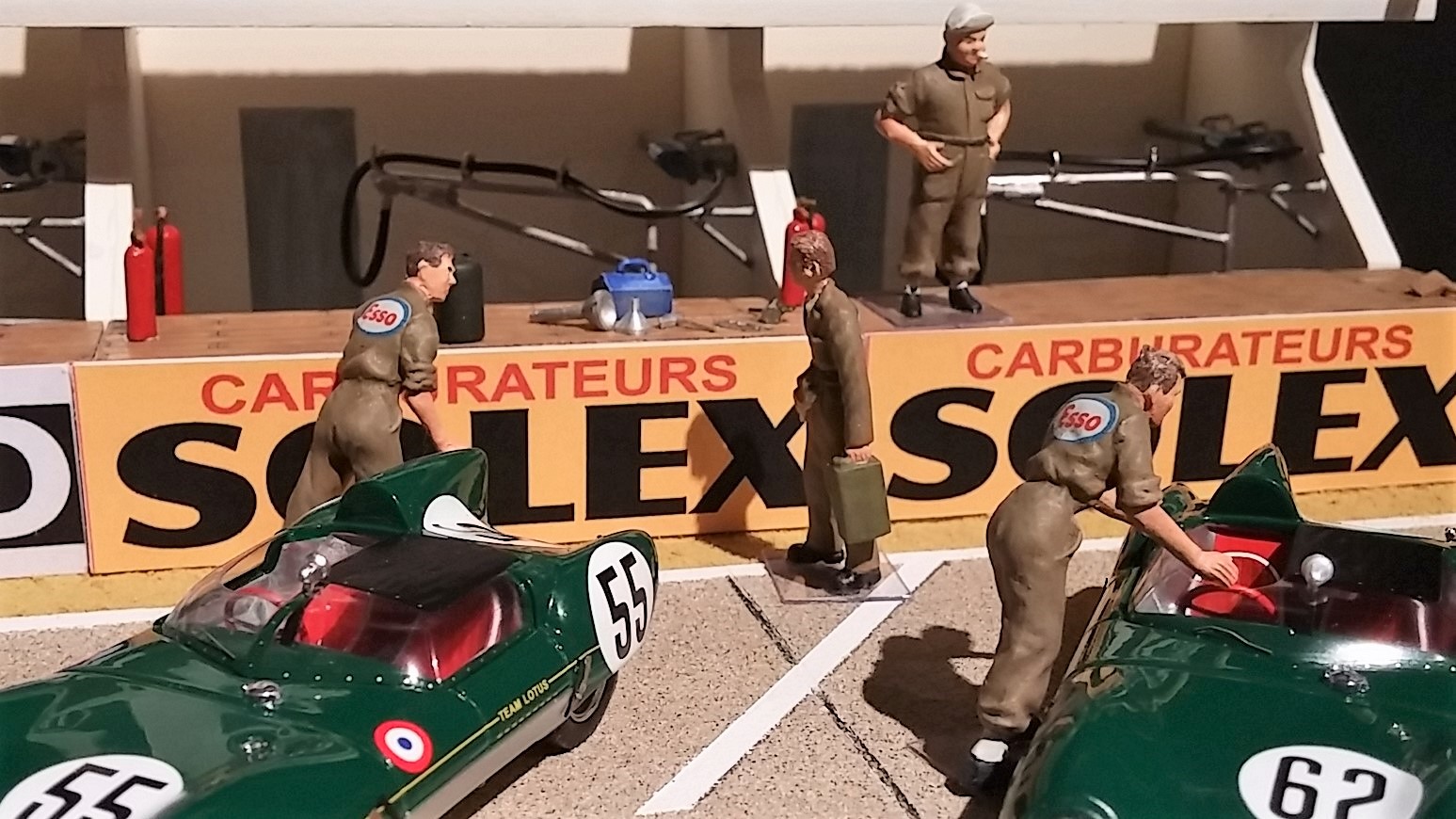 A mixture of S&D and Trackpass spectator and mechanic figures. 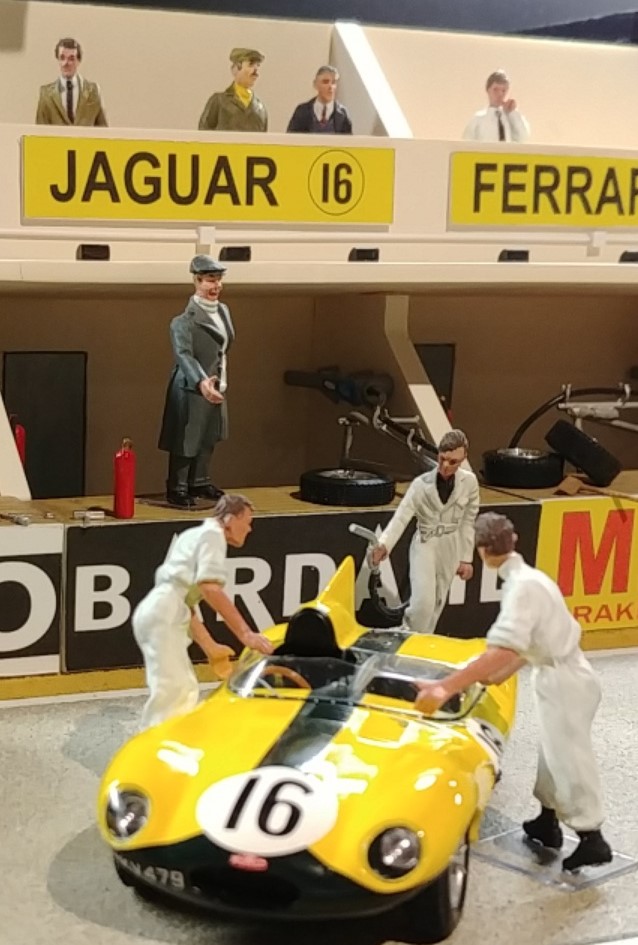 So where can we obtain these figures from? There are several companies making figures be it small low quantity cottage type businesses to that of the mainstream diecast model manufactures.

I will start with non-painted metal diecast 1:43rd scale figures, which are effectively O’ Scale in the world of the railway model enthusiast. This has the added advantage of broadening our scope of available subject figures from say, passengers waiting on a station platform to becoming that of by-standers and/or spectators at a motoring event.

Denizen Miniatures owned and produced by Chub Pearson. The company was started in 1982 and is still in business. His catalogue of primarily motorsport figures from the early fifties up to the nineties are of high grade and quality with excellent detail. These are made up of mechanics and drivers. A number of his driver figures are in fact headless as he casts separate heads with or without helmets, then you have further options of open faced or full faced depending upon era. So, the choice is quite extensive. Also, you will find a small number of non-motorsport figures that will accompany any period of vehicle as well.
Website is http://www.denizenminiatures.co.uk/ 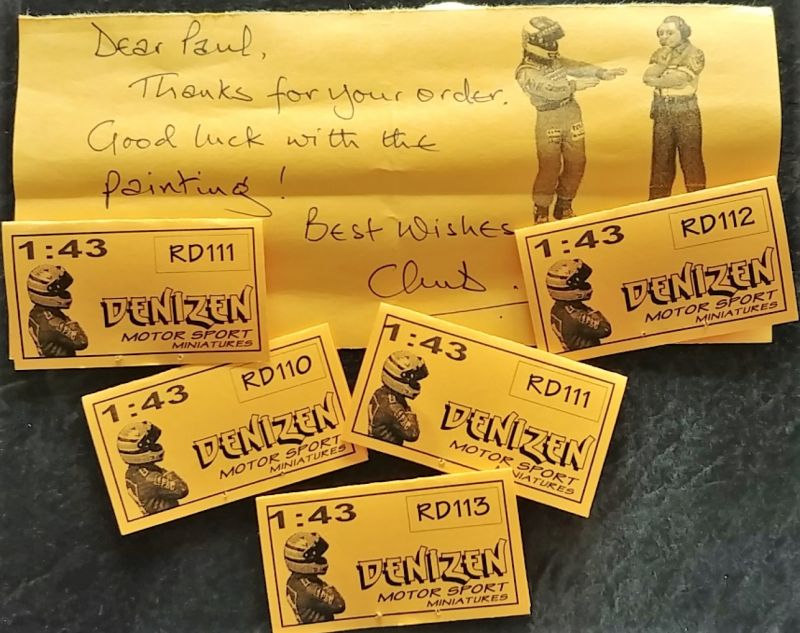 Trackpass. A great source for French Gendarmerie figures, ideal for any Le Mans diorama. Also available are a smaller number of mechanics, drivers and spectators from the 60’s. These I believe originated from someone near Norwich but now appear to be for sale either through ebay (the Figure Shop) or alternatively Dartcastings, see websites below.
https://www.ebay.co.uk/str/thefigureshop https://www.dartcastings.co.uk/trackpass.php

S&D Models featuring Phoenix 43. Been in business since 1985 producing all manner of scale figures for a varying degree of interests. Their 1:43rd range is quite extensive covering not just figures but other incidentals for railways and the like. They have a motor racing figures section on their webpage, all figures start with a reference “MO” and range from seated drivers, mechanics from the 60’s through to the 80’s.
Of interest to the non-motorsport collectors amongst us, they have a large number of Phoenix Figures with reference “OA” or “OF”. These are more of your “general life” figures primarily for railway layouts but there are a number that could be incorporated with vehicles. Their website is; https://www.sanddmodels.co.uk/products_43_figures.htm 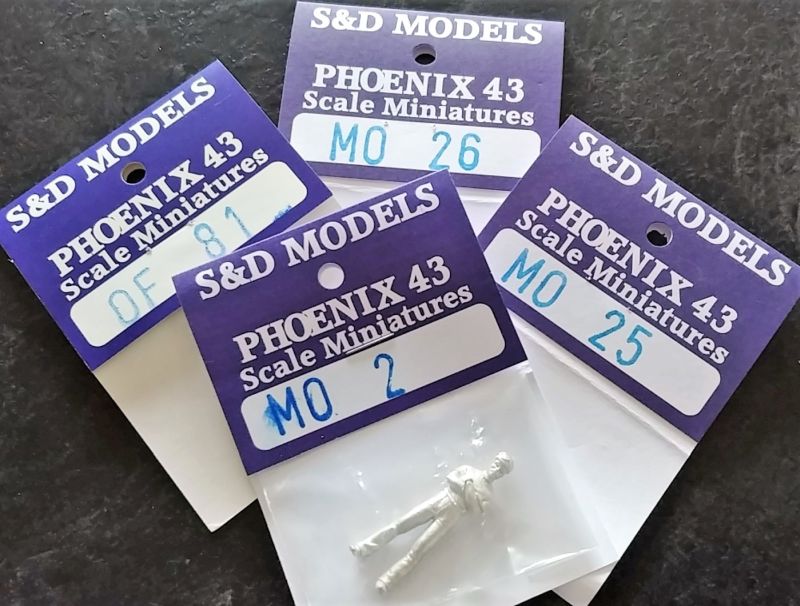 The next group are those produced by the model manufacturers, normally pre-painted and made of resin. These figures are relatively new to the market in comparison but are becoming more frequent with new subject releases being published.

True Scale Miniatures have released some excellent boxed collections of figures as those shown below. I believe the Gulf Team figures are also available as Martini Team plus they have released just a plain white set, ideal for customising to your collection needs.

TSM Generic Team figures. These very well painted with shadow lines within the creases of the mechanics overalls. Could be used for any garage scene. 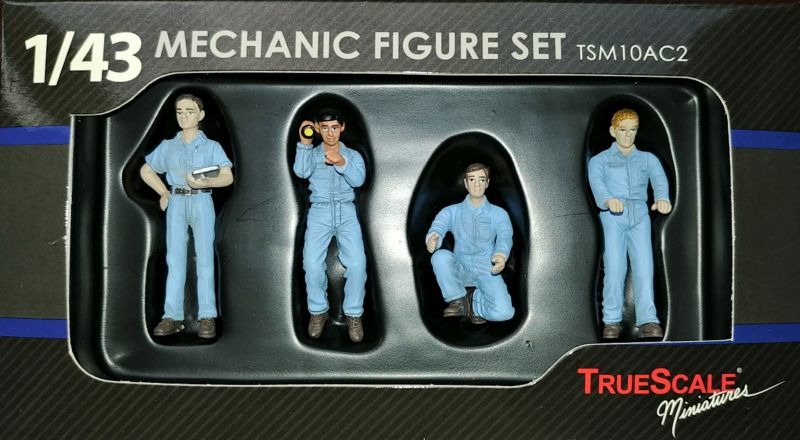 Moving onto the larger scale of 1:18th, as far as I am aware there are no metal diecast or resin non-painted figures available to the hobbyist to build up or paint. The only figures I have come across to date are already made, painted and produced by the model manufactures. From a motorsport perspective the main manufacturer I am aware of is Le Mans Miniatures. Here are some examples. 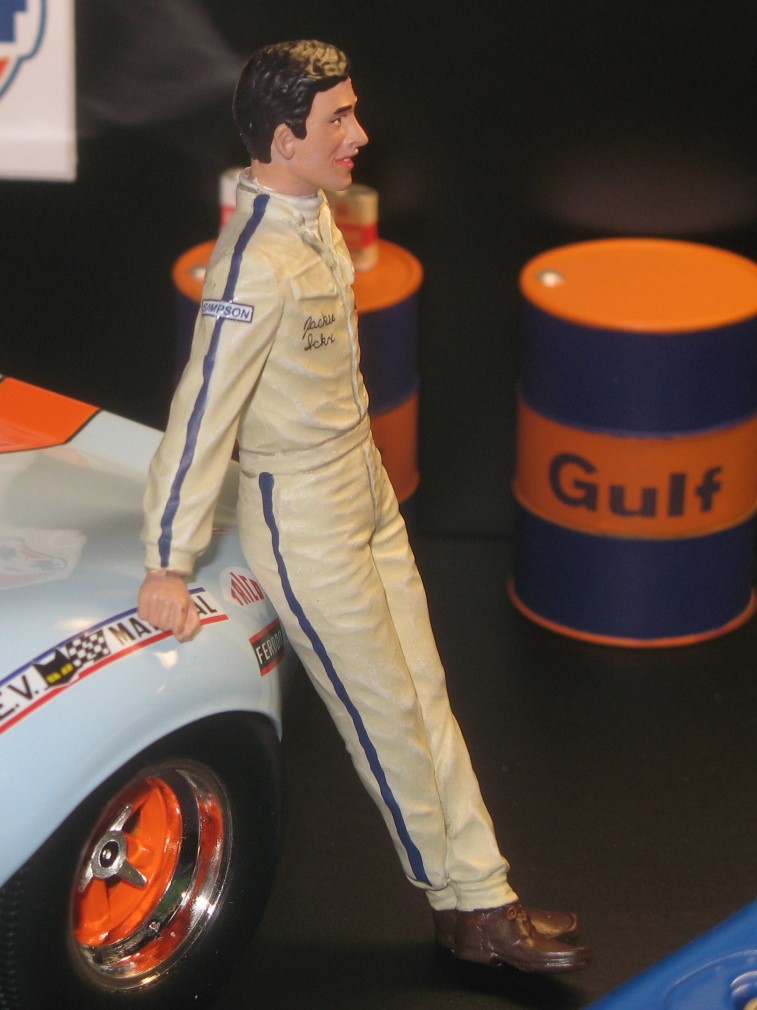 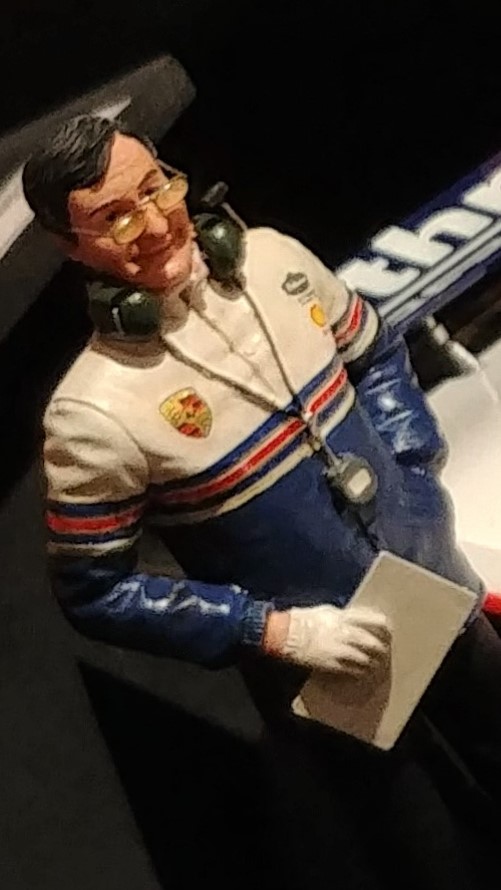 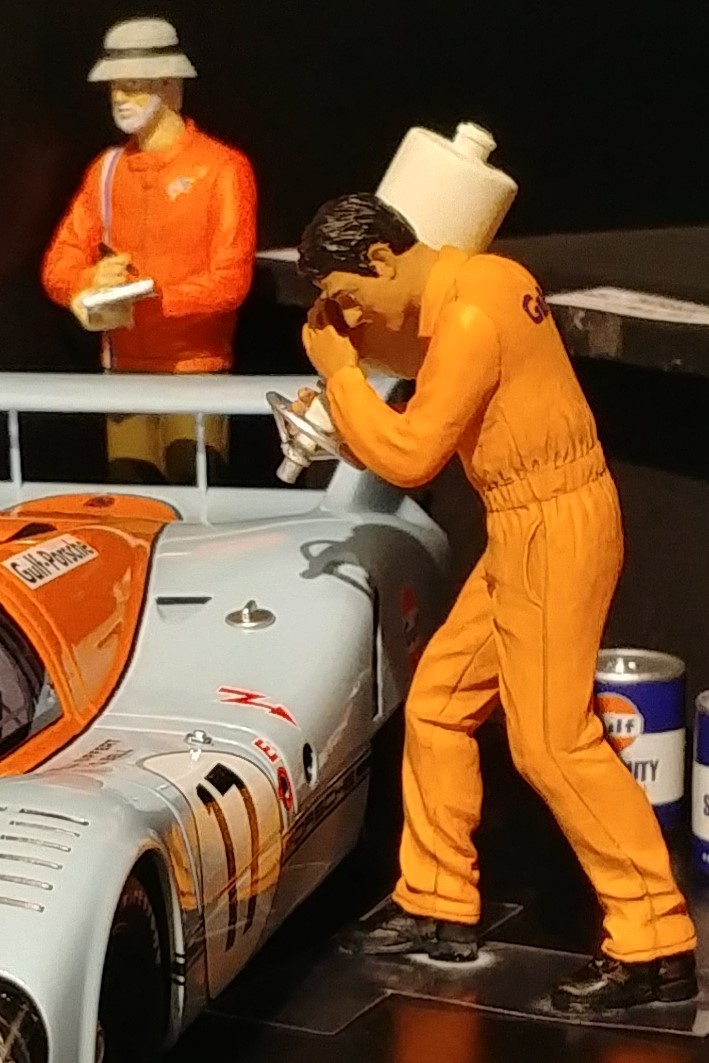 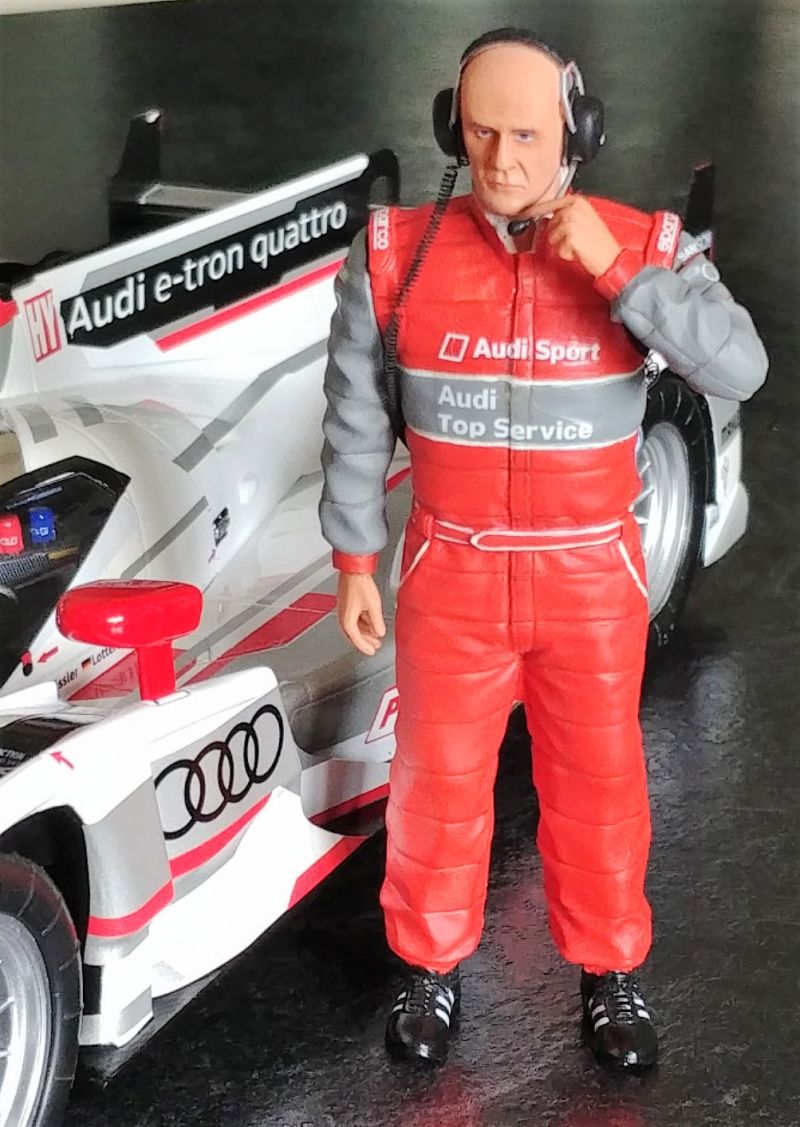 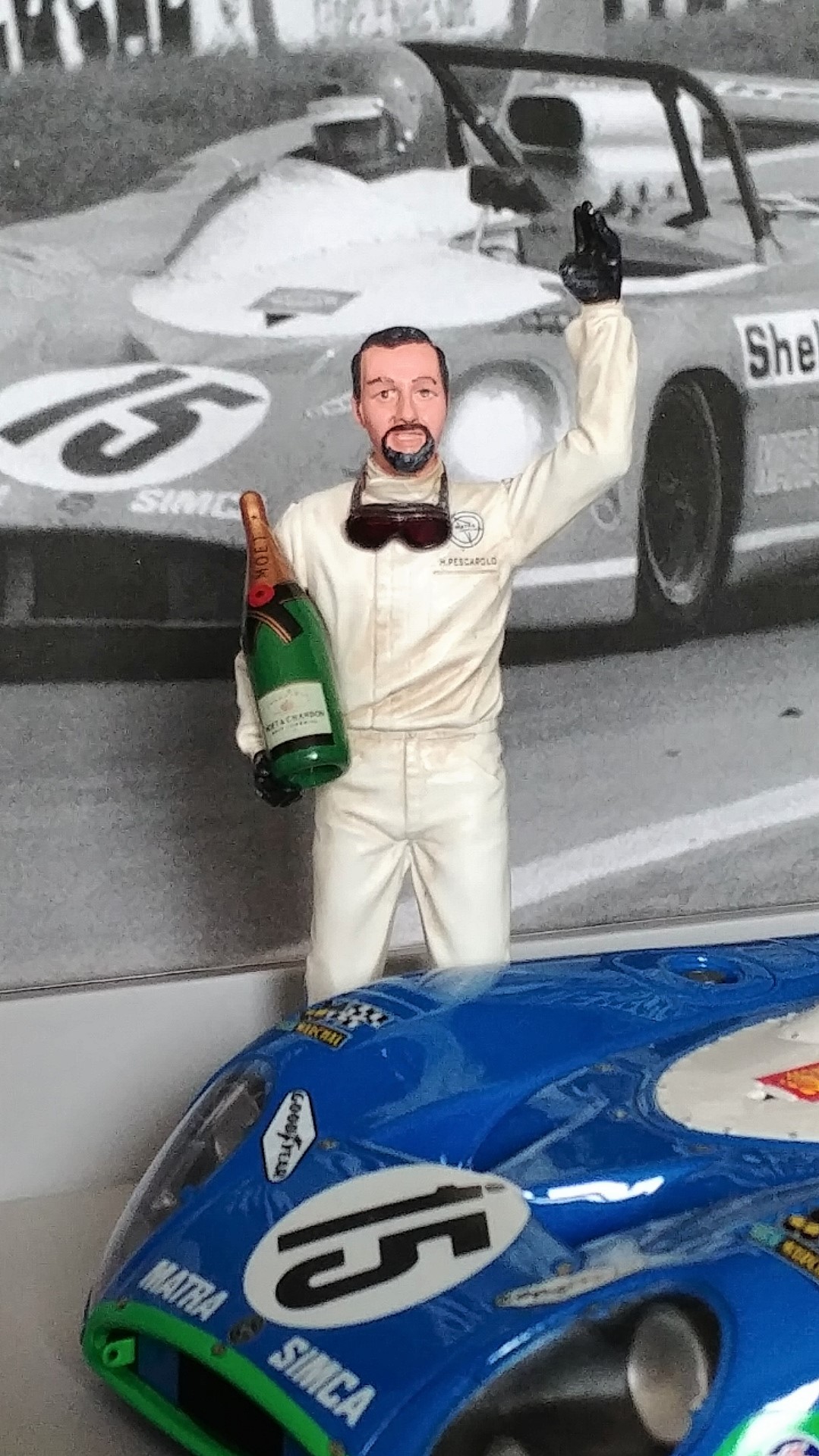 The above figures have been on the market for a while now, but I note Le Mans Miniatures have announced a reasonable number of new subjects in their 2019 catalogue. So, watch this space as I have just ordered one of them already.

I’m sure there are a variety of many other figures on the market but the above mentioned are those I tend to purchase due to the subject matter. If you know of any others, please share within the pages of our forum. A figure just adds another focal point to a display don’t you think.
Paul - "Collecting Motorsport in Miniature; for the passion and its history".
Top

GREAT article, Paul, thanks for sharing!
Though I'm not in the diorama business, figurines are always nice to have for photoshoots - they give the shot and extra degree of realism.

Excellent article, thanks! Will refer to it later when I get around to adding figurines.
My collection
Top

Nice read!
Now I remembered that LMM has also started their figure range in 1/43 scale, haven't seen them from up close though..
"A picture is worth a thousand words, but a model is worth a thousand pictures." Harley J. Earl
My concept car 1:43 collection: viewtopic.php?t=1096
Top

Thanks for sharing Paul. A few figures can bring models to life, even just in a display cabinet.
“Racing is life. Anything before or after is just waiting.” - Steve McQueen
Top

Brumm also released not a long time ago some crew sets - Gulf, Ferrari (in blue or black/yellow overalls) and brown.

I have their Walter Röhrl, that is a pretty nice, if costly, figurine.
My collection
Top

I have been meaning to comment for some time on the excellent article Paul. I agree with you, painting figures is very enjoyable, its a matter of finding the time. I want to experiment with oils rather than acrylic paints at some point to get better "patina". There are some great 1/18 figures (painted and unpainted) on ebay out of Russia and Poland of some great drivers such as Fangio, Moss, Hill, Stewart, etc. They also have other automotive figures as well as other (movies, etc.) for sale. Not cheap, but the work is very good. I have never attempted painting a 1/18 figure, but have a couple to do at some point. Lots more detail than 1/43, requires more facial detail, something I'm not good at! Here are some of my 1/18 figures from those sources:

Stirling Moss (Fangio and Neubauer are from LM Miniatures and mechanics are Figuretec, but not sure they are still in business.)