As there is no specific section for Rally Cars I have put this under touring cars....?

This is a model of a conversion I made many years ago of an infamous crash on SS1 Knowley Safari Park, only made worse by the fact that the car was carrying the TV on board camera. The number plate was A 478 WOE!!! You can see the whole thing unfold here

The only reference I had was this film and a few photos in the rally reports. The model is based on a 1:43 Heller plastic kit, as back then it was the only choice I had. One day I might redo it based on a Vanguard. The standard road car had to be converted in rally spec regarding the interior seats & roll bar, and the wheels are from Robustelli. The front wing was cut off and replaced with a crashed one made from a thin sheet of metal. It was strengthened up with filler behind to stop it falling apart. The decals were sourced from the spares box. A complete set of these decals can now be found on Ebay from a decal makers in Spain, so redoing this model now would be much easier. 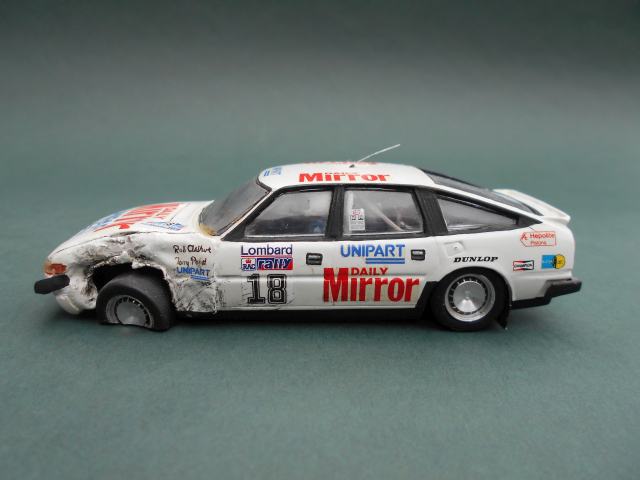 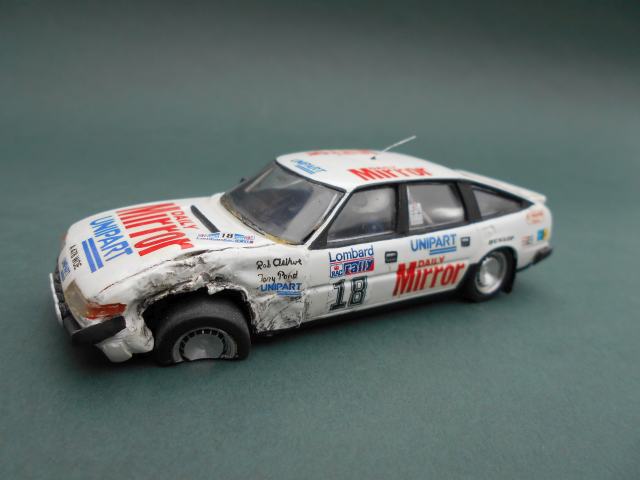 I have had this model on display at many shows and at one I was asked if I would like some photos of the car. It turned out this person was actually there and took these photos. 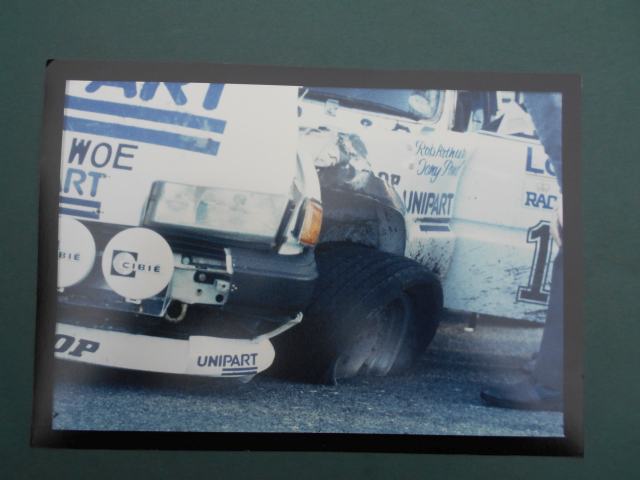 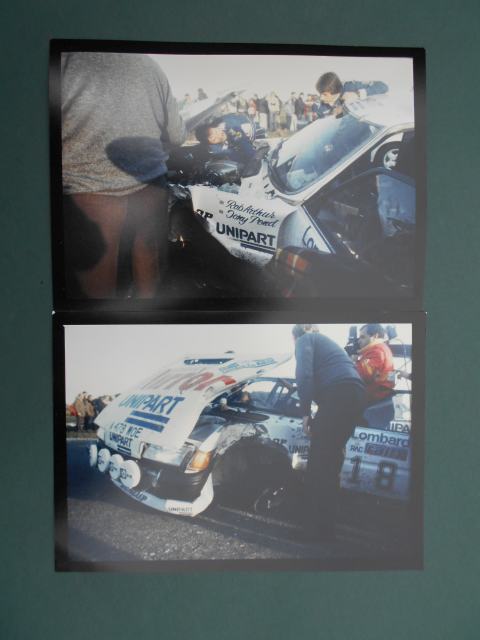 Many years later I made another version of this car as it had appeared on the 1984 Manx Rally. A huge car for the bumpy but very fast lanes of the island. It was producing so much grip out of the hairpins they had an on board system to squirt water onto the rear tyres to get them to spin rather than breaking a half shaft with too much grip. You can see a film of this car here, that’s if you can see through the fog!! First part looks like it’s on Injebreck and the later coming up and around Brandywell Cottage. Incredibly they finished 3rd overall

Some of my photos taken on the rally 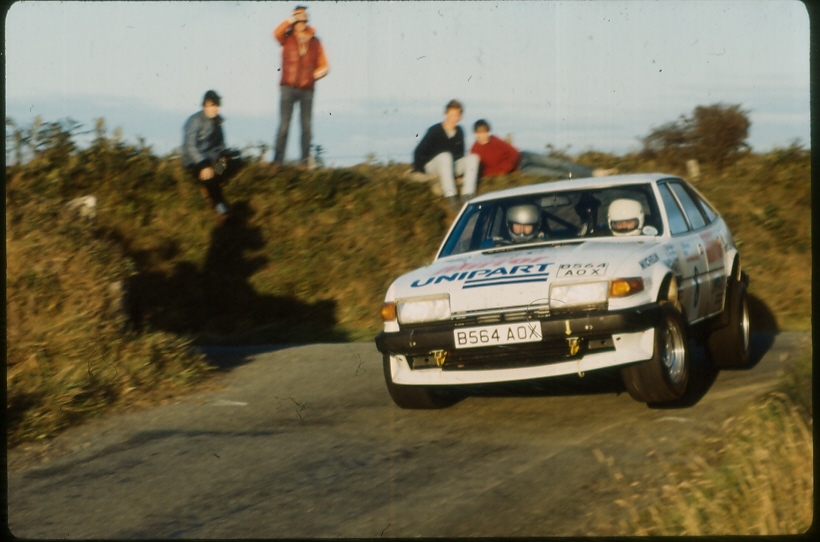 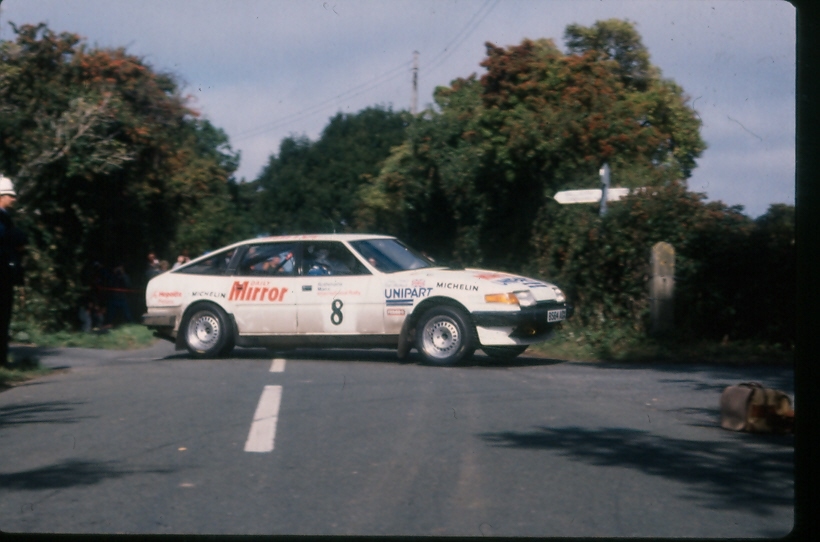 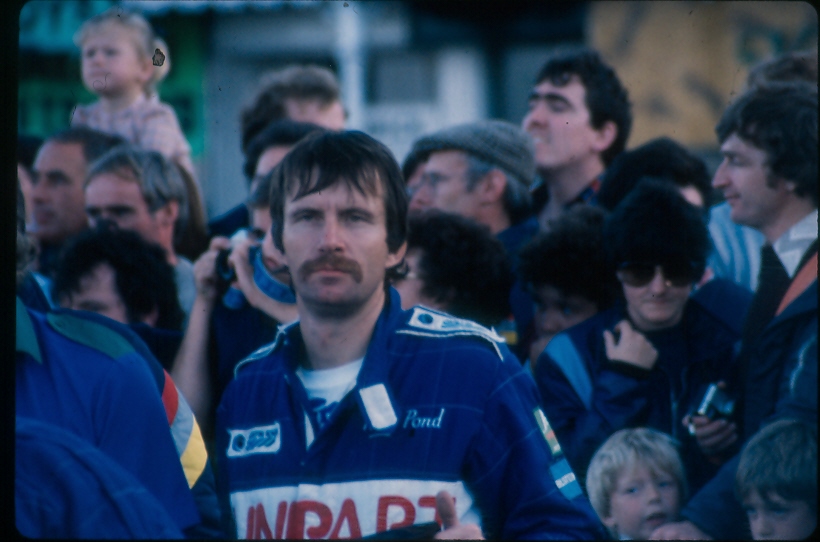 This model is based upon Vanguard’s superb SD1 model. Same old problem of converting a road car into a rally car, all the interior needs stripping out, the rubbing strip removed and the wheels changed. I think the decals came from PJ models. 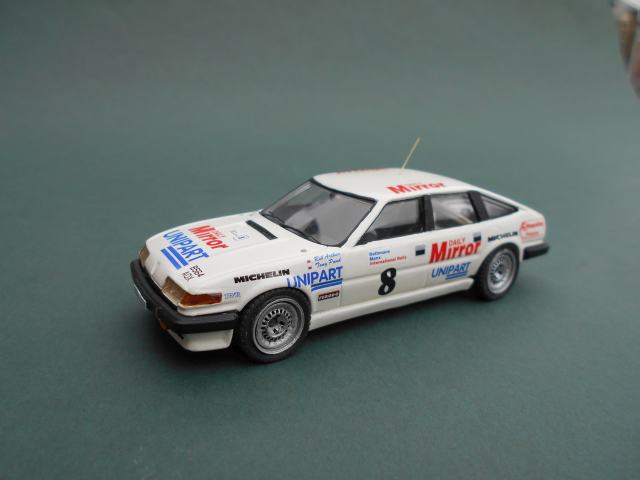 Happy days, great car, sadly Tony Pond & Rob Arthur are no longer with us but heros for us UK rally fans

If you don’t know who Tony Pond was https://www.youtube.com/watch?v=lE4Dv6ONEbE

I love the models but the crashed version is my favourite. Very nicely done!
My collection
Top

Chris, thanks for sharing. That's a fantastic one-off unique model and you'd never know it was a plastic Heller kit. Here's a couple of pictures you may or may not have seen that shows the damage quite clearly :

For a while now I've been thinking about doings something similar and modelling this 1960 Le Mans Ferrari 250 SWB using a Bang model :

Exactly my point.....but nobody listened

Exactly my point.....but nobody listened

That sure didn't take long...

Ian, there's a PW SWB you might find is a cheaper base for your conversion.
My collection
Top

Great conversion Chris. Pondy is my ultimate rallying hero, a fantastic character who's loyalty to BL probably cost him more success than he actually achieved. Fiorio the then Lancia boss wanted him to drive for them after Tony blitzed everyone in Ypres but I understand he wasn't prepared to drive a lhd machine! His interviews with the late Barrie Hinchcliffe were often the highlight of the Grandstand/World of Sport rally reports and BHP videos.
Top

I remember watching the Rover crash on TV I think. All a bit embarrassing as it was the first stage! Superb models of the SD1, wish I had your talent and patience. I liked Pond, great guy and bloody quick. Didn't he do the fastest lap of the Isle of Man in a car in a later model of Rover? Such a shame that he is no longer with us.
Top

I know the Island pretty well and he was very very quick along the bottom side of the track - roads that have walls, kerbs, letter boxes, trees, man hole covers etc it was a scarry ride. If he had an accident along here it would still be happening now.

Sit back and enjoy… https://www.youtube.com/watch?v=DRg5Sp1iQMc