The Rover 2000 was driven by Roy Pierpoint, Clive Baker and Roger Enever and the Mini Clubman driven by John Handley, Alec Poole and Julian Verneave. Both cars were part of a BL attempt at the 1970 Marathon de la Route.

The Rover model was commissioned by the current owner in Australia who is restoring the car back to this specification, for BL Team Manager Bill Price and one for myself. Only 3 have and will be made

Many years ago I built an earlier version of this car in red, based upon the original Corgi Toys model. This time the base model would be the Vanguard Monte Carlo Rally version, because it had some spotlights and hub capless wheels, which might be useful in other projects. The Vanguard comes apart easily enough by drilling off the rivets. The main problem was going to be the wheel arches. These had to be filed up to accommodate the new wider lower wheels and extended out using Milliput. The other problem was the bonnet bulge. In early photos this is a square shape but on the race car its oval shape. In later years it went back to a square shape!! There are few photos of the car from period but Bill & Rob managed to find a few black & white ones to help. The paint was a bit tricky their first choice turned out to be completely wrong, before Bill tracked it down to be a Triumph colour, which was ordered from Rimmer Brothers and arrived the next day. The decals were ordered and I had the wide deep minilite wheels ready in the spares box. I asked Bill if it had one or two seats…”two seats…..we had to drive the car from Calais to the Nurburgring, so we had a navigator in the car for that part…” 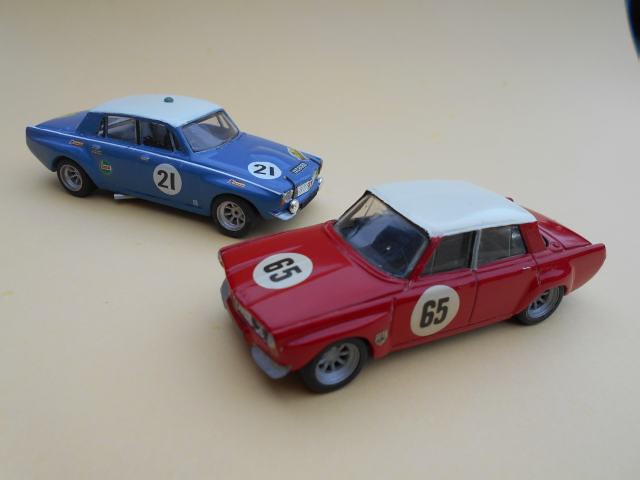 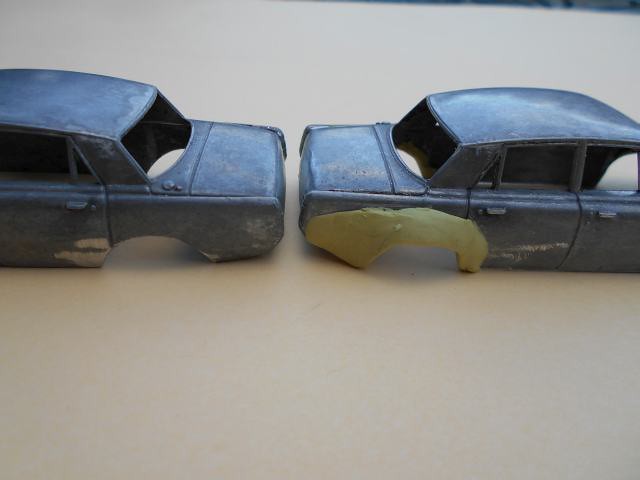 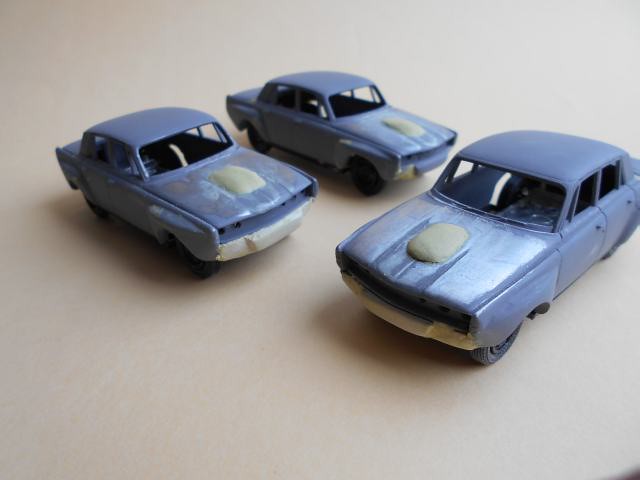 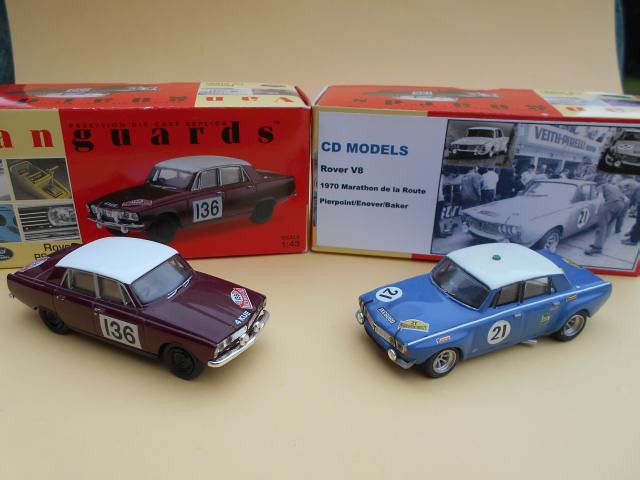 The car eventually found its way to Australia where it raced in the yellow and red Shell colours. This is another project in hand for later this year 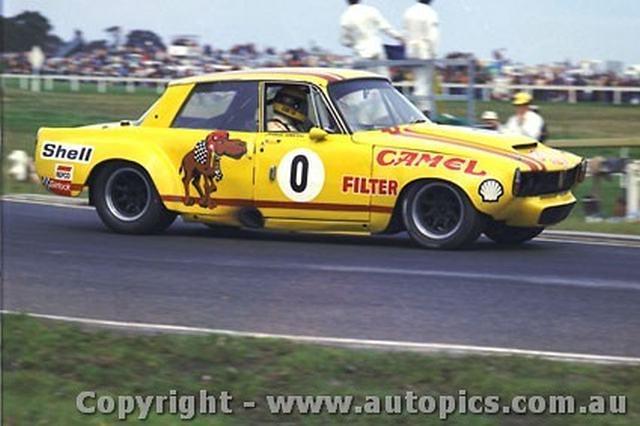 Back to the real car - remember that 1970 was also the World Cup Rally year so all BL’s efforts were being directed towards the Triumph 2.5Pi on that very long arduous rally. So the car was built for BL by Bill Shaw Racing with a 3.5 litre V8 engine, the first time the Buick engine had been used in Rover. The 1970 Marathon de la Route 86 hour race started at night at the notorious Nurburgring. After the first 17.6 mile lap the Rover was leading and continued to do so for 14 hours. Remarkably the Rover required just ONE gear change per lap. The car was doing 13 minute laps with ease. Before the race they had a lot of propshaft problems and Hardy Spicer had rushed some new ones to them which were fitted just before the start, but again the propshaft failed after 16hrs and before the gearbox disintegrated the car was retired. The Rover had been leading by 3 laps. The car had proved to be fast if a little unreliable and with development could have been BL’s future race /rally car. Sadly, when the team returned to the UK they found out that the BL Competition Department was to close and that was the end of that. 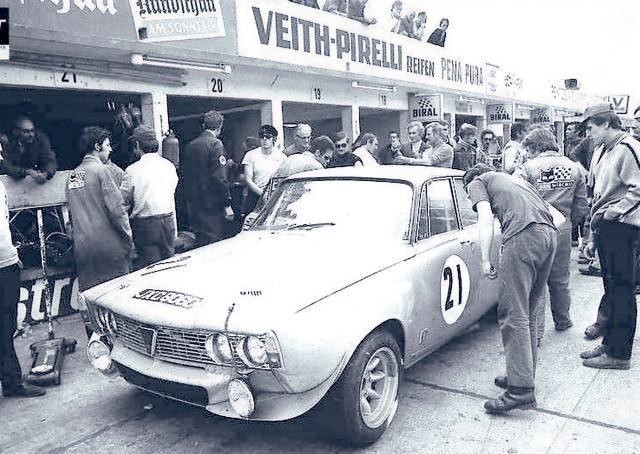 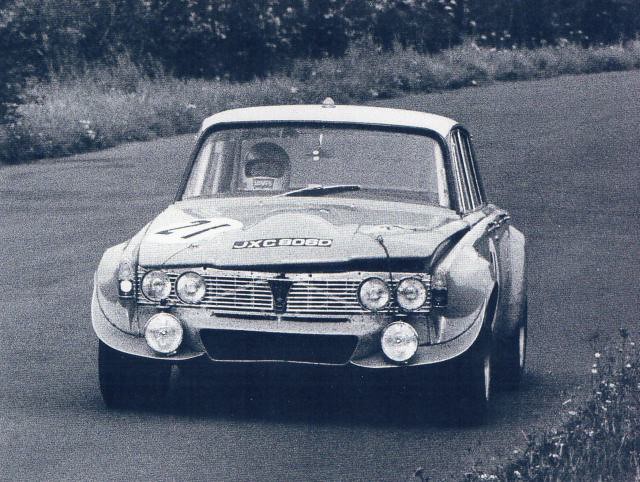 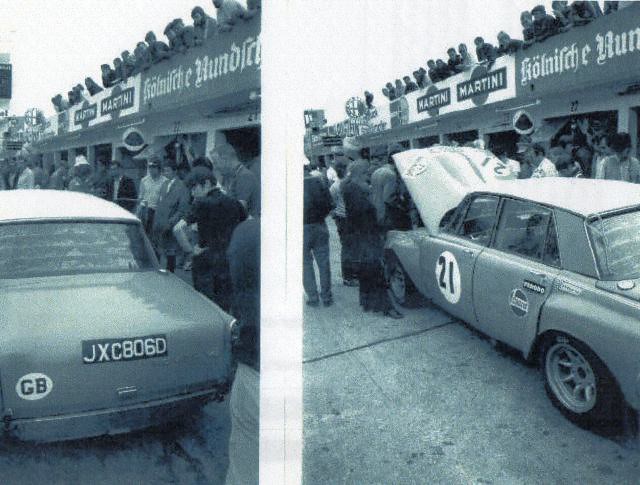 After finishing the Rover Bill asked if I could complete the set for him by doing the Mini Clubman.

The Mini is based on the Vanguard Scottish Rally base model. Why are these models selling on eBay at over £50, fortunately I managed to get one for less than £30 with a wiper missing but I had a suitable one in the spares box. This was going to be a much easier conversion. A strip and respray, and decals made was all that was required. Again photos of the real car are almost nonexistent. Only one has and will be made 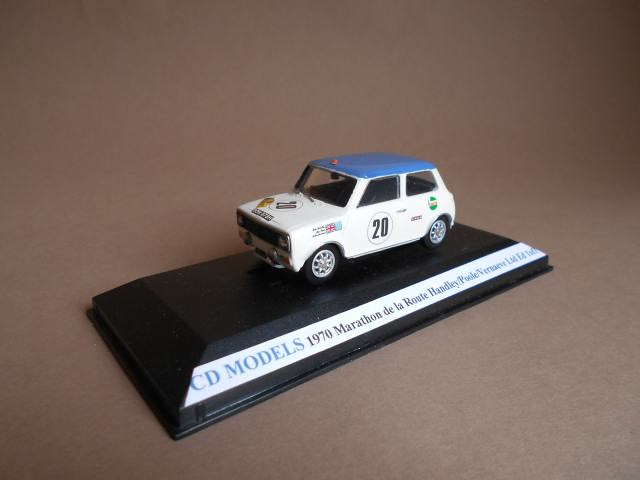 As above the Mini Clubman was entered for the 86 hours Marathon de la Route. At the end of lap 1 the Rover was leading followed by the Mini and by dawn the Rover was still leading from the Mini. Around the 9 hour mark the Mini came into the pits with severe over heating problems. The head gasket had gone. With only 15 minutes to change this on a red hot engine it they ran out of time finishing the change in 25 minutes. Just to prove that that all still worked, they completed one more lap before retiring. Chris 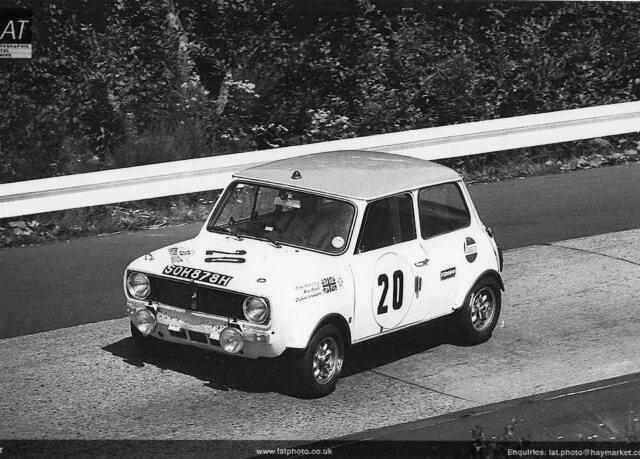 VERY nice Chris, specially the Mini (I love that car)! But the Rovers look terrific too.

Both were pretty ticky.

The Rover was a nightmare filing the wheel arches out to fit the new wheeks, then the chassis wouldnt fit and so it went on.

But it came out well in the end

The Rover wins for me, probably due to the "local" connection. Maybe you need to do a "Smoking Camel" version next

I believe the guy that owns the Rover also has the Healey that raced at Le Mans in 1970.
Martin
Top

Smoking Camel version is that the yellow one shown above?

I have a few other colour photos and the models ready to go later in the year. Conversions like these take so long it jams up the whole work bench. But at least I have learnt from the blue ones a qiuicker route to the finish line!!

Chris, great work on the Rover. I can only imagine how many hours you spent sanding and filing to get those wheel arches right.

There are more pictures of the 'Camel' Rover on the Autopics website. Simply go to the main website (www.autopics.com.au) and enter Rover in the search box. 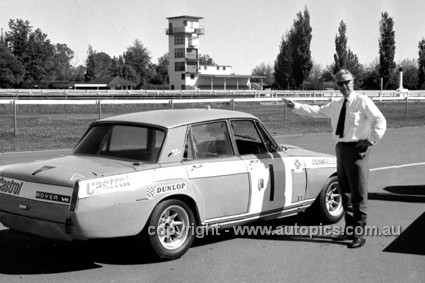 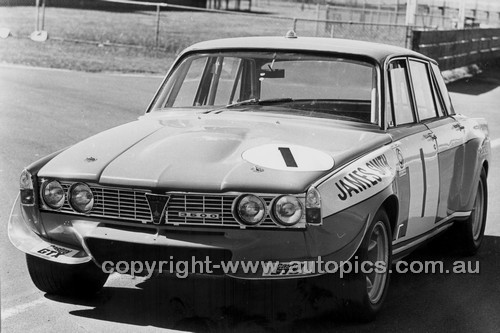 Here's the car in 1973 (note the lack of the front spoiler and that the position of the 'Camel' varied race to race) : 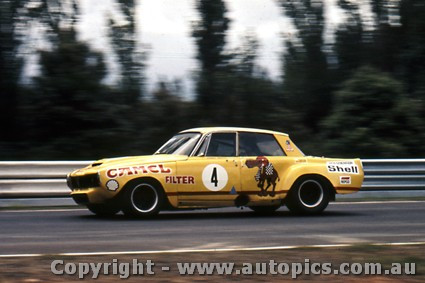 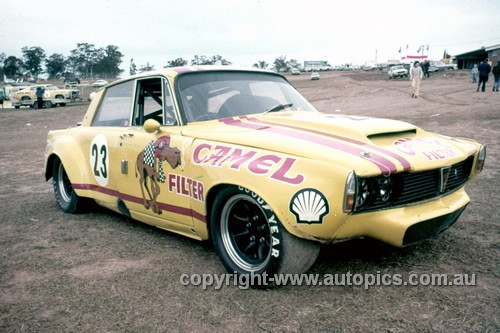 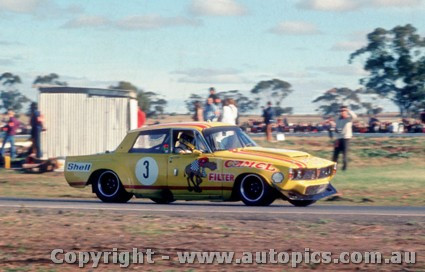 I remember seeing that Rover racing at Brands Hatch when it was red and white, great car. Made a welcome addition to the grid full of Minis, Escorts etc.
Top

Thanks for the photos of the Camel sponsored car.

I had not seen the one parked up before.

The main problem is that we can see the camel character but we really need a nice close up of it to be in a position to make the decals.

Anyone got anything to help out?

Ref the red car Bill Shaw racing prepared this one too. It also appeared with and without a bonnet bulge. The old Corgi conversion stand up well againt the conversion on a Vanguard model finished earlier in 2018.

Chris, here's two more pictures I found while looking for a better picture of the logo. 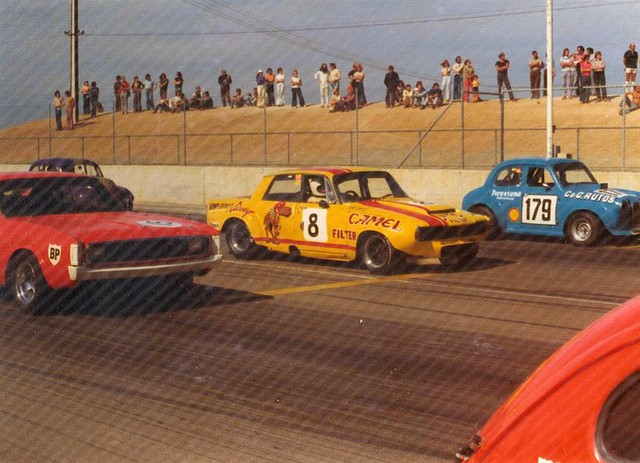 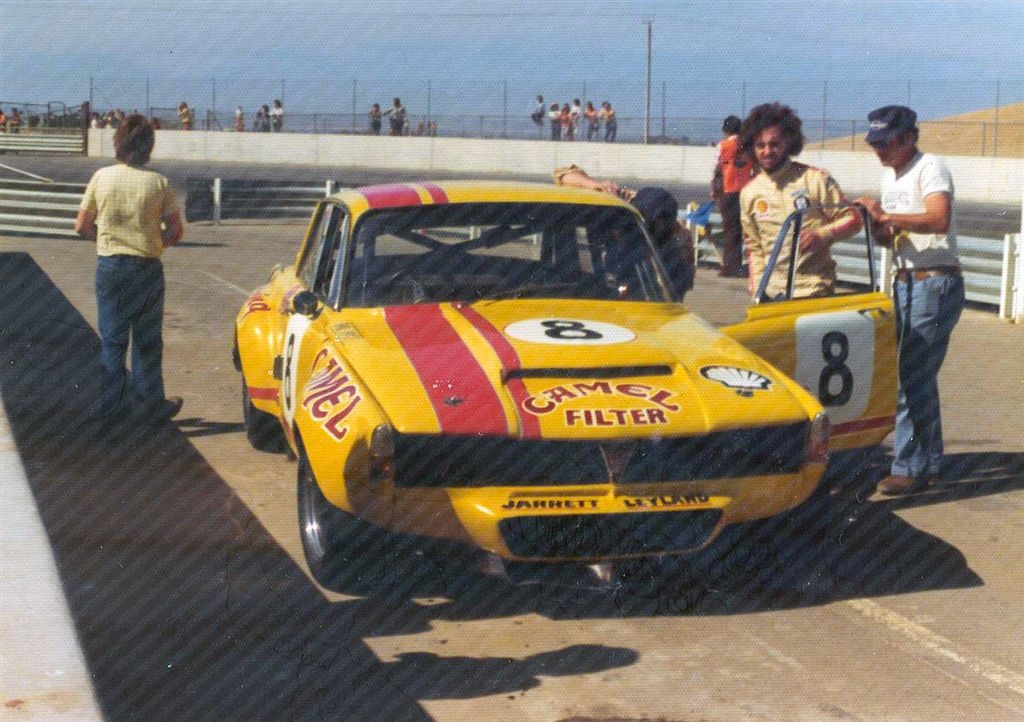 I assume you've also found this link : http://www.modbase.info/rover-p6/4593476643
“Racing is life. Anything before or after is just waiting.” - Steve McQueen
Top

Wow!! I have just spent ages on this web site

I remember reading about and seeing a few of those cars.

Thanks for the link and the research

Those Rovers really ring the bell for me, excellent work!
Jeff