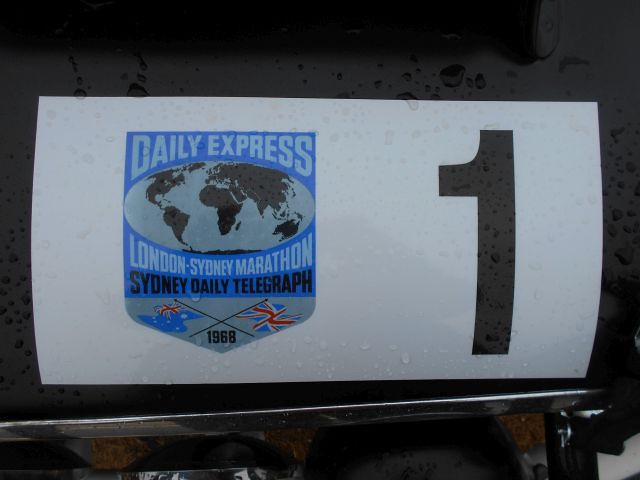 On Sunday 29th July at the Heritage Motor Museum at Gaydon, Warwickshire rally fans gathered for this 50th Anniversary of the London to Sydney Marathon.

After weeks of very hot weather in the UK the day of the show was wet and cooler, but it didn’t dampen everyone’s enthusiasm.

Outside were some genuine cars along with some replicas. For various reasons Andrew Cowan and the actual winning Hillman Hunter were not available. 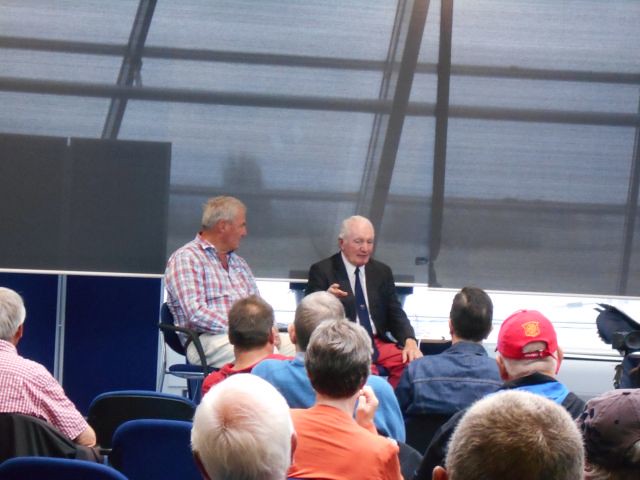 Replica of the winning Hillman Hunter 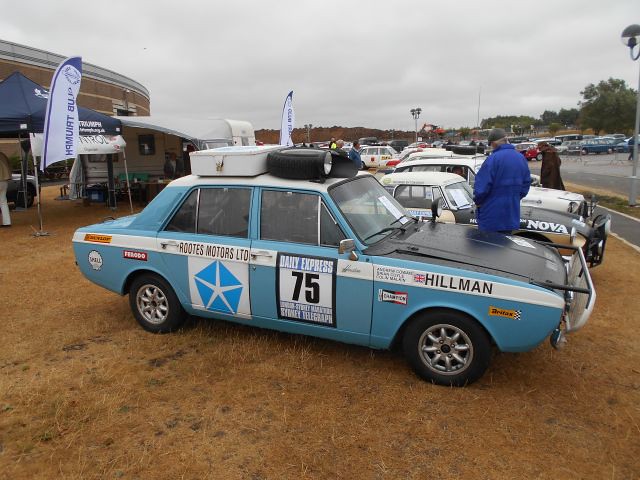 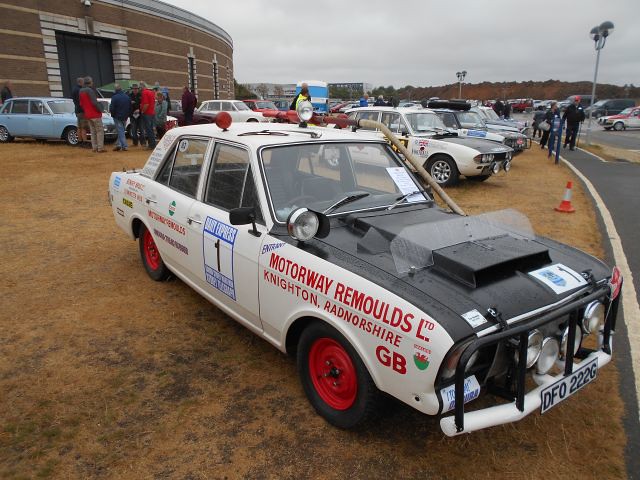 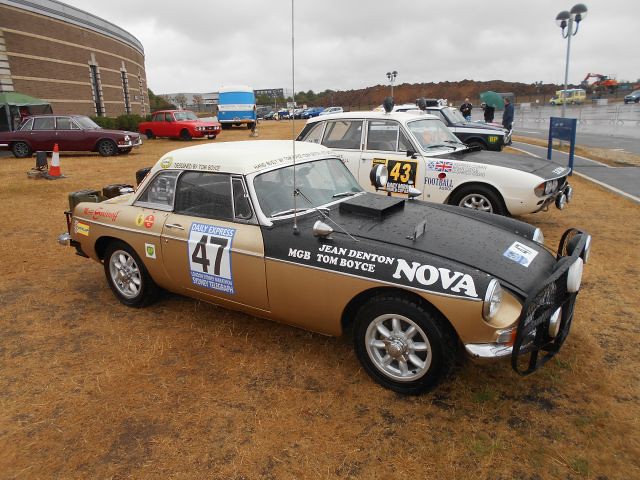 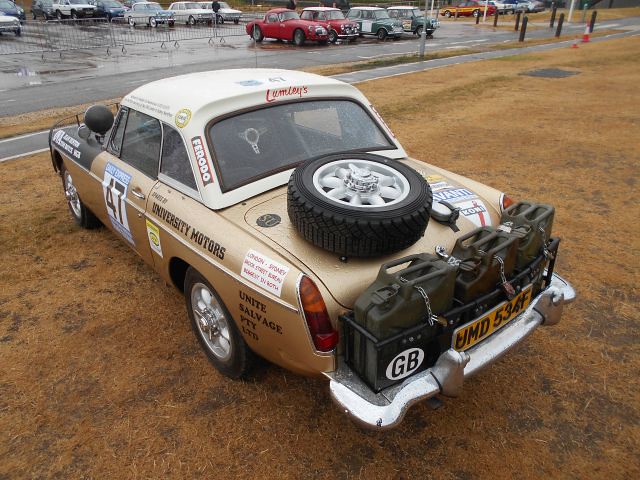 Inside Andy B was there with the beginnings of a London Sydney Marathon Collection. Like his huge World Cup Rally model collection many of which are one off creations. 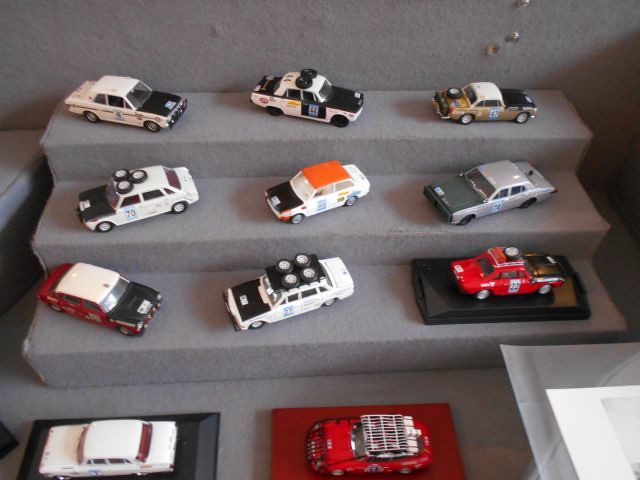 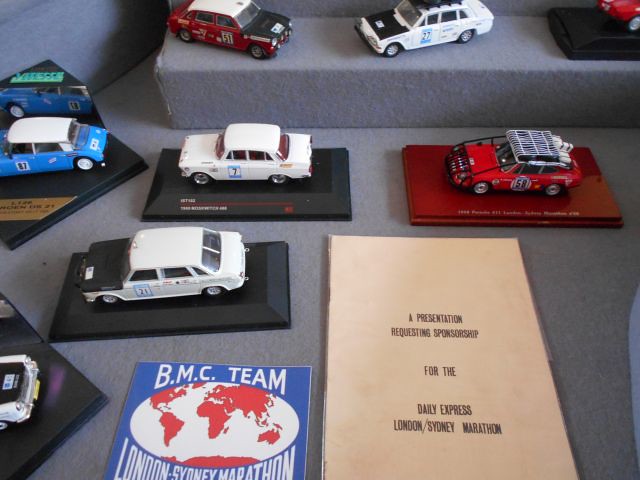 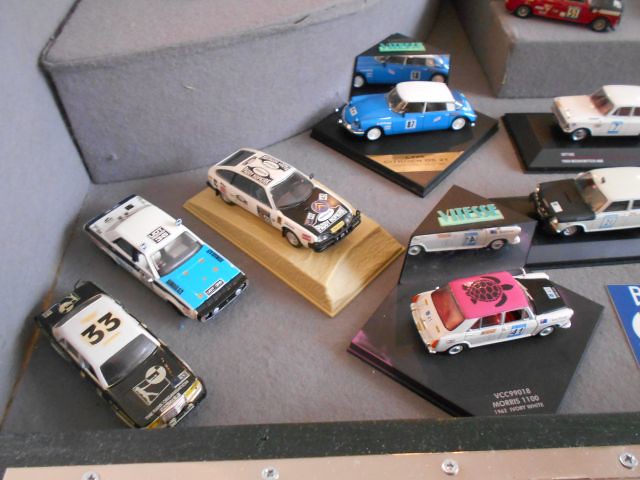 Robert Connor author of the London to Sydney book had some LS models made for him by someone I didn’t find out who? 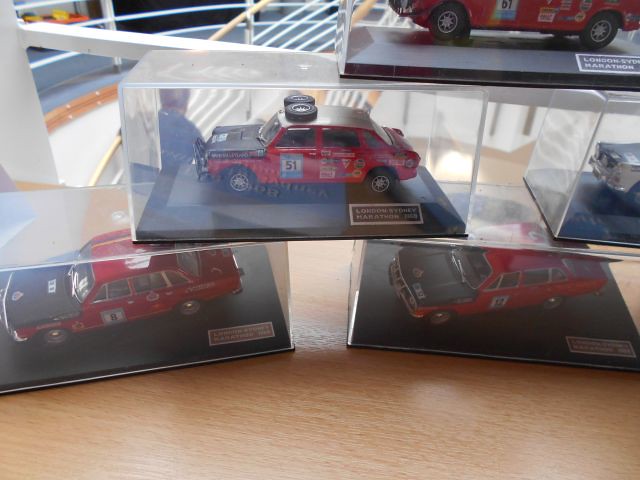 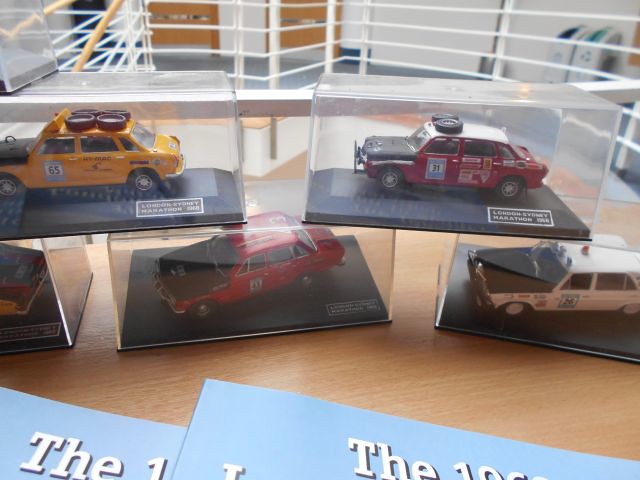 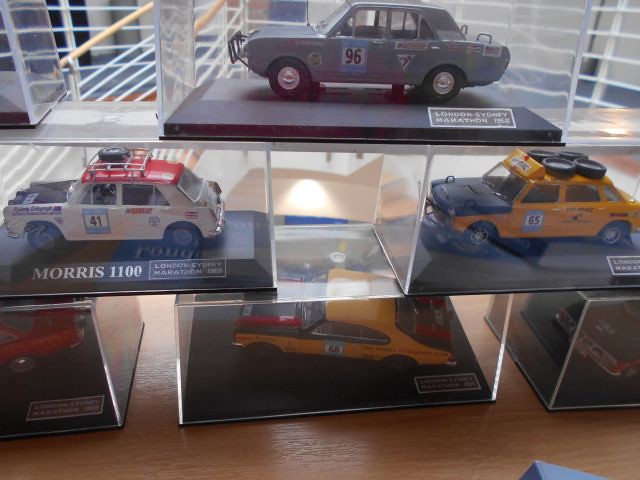 I was originally going to put on some rally collection but was then asked if I could do a Rootes display. Gordon Jarvis one of the organising team for the show passed away recently. I knew Gordon as a fanatical Rootes man mainly for the Arrows cars, for preparing Richard Burns first rally cars and for his faithful replica of the LS winning Hillman Hunter. So, my display covered the Rootes from the 1950s up to Lotus Sunbeams. 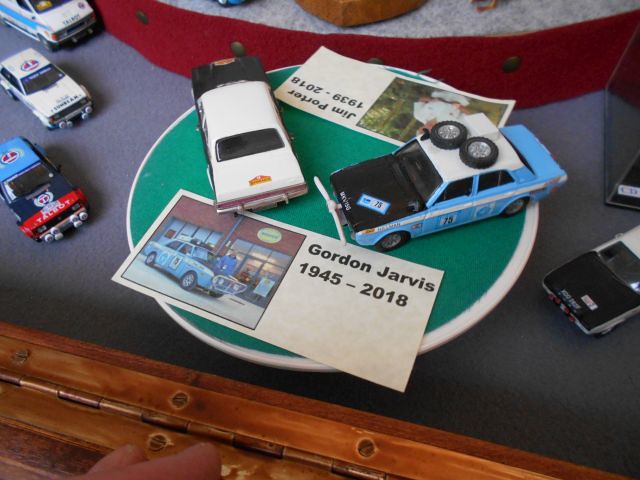 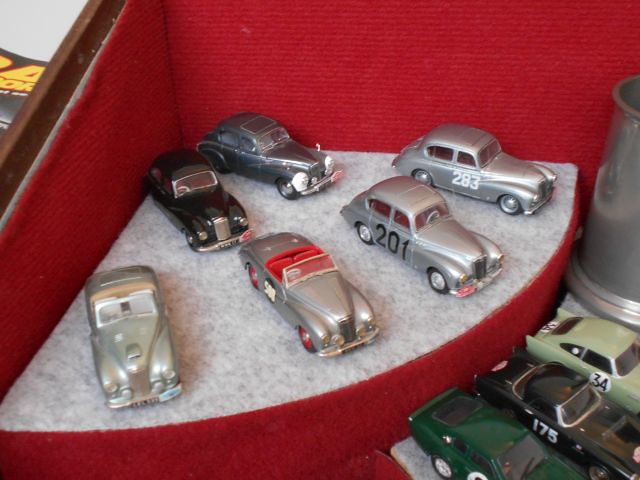 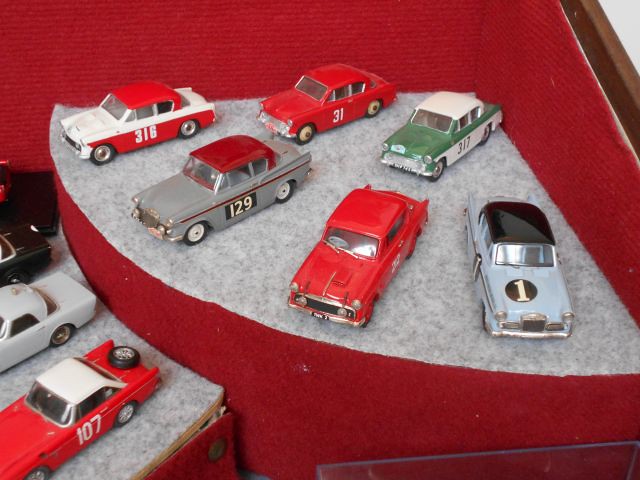 The tankard at the back was issued by the Rootes and given to all members of the winning Hillman Hunter team. At the front a finishers plaque. The Corgi Toys Hillman Hunter a superb model in its day, but completely wrong!! The one on the turntable although not finished is more like it. 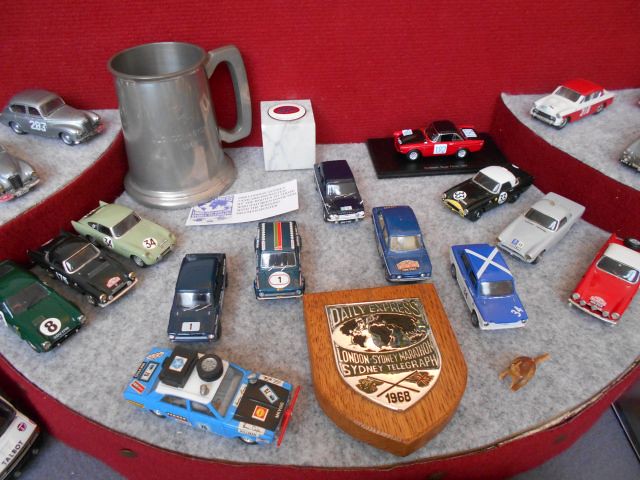 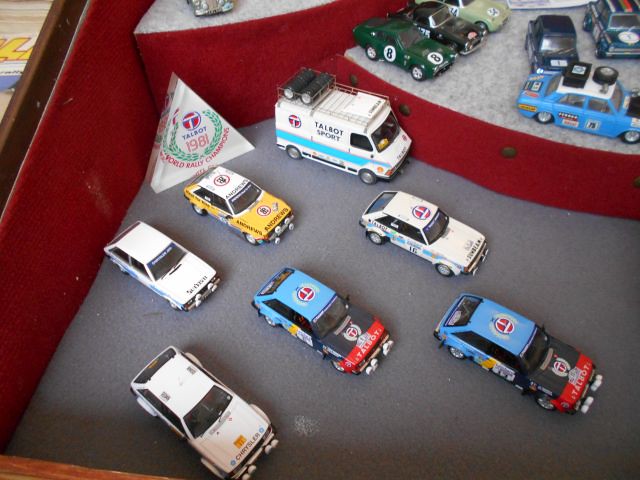 Also, on display were some models I made for Jim Porter (Roger Clarks navigator) who passed away last week. He was due to collect three models from me at this show. I only met Jim in recent years and have made many one-off models for him and enjoyed all his stories from the early days of rallying. I will miss him. Chris 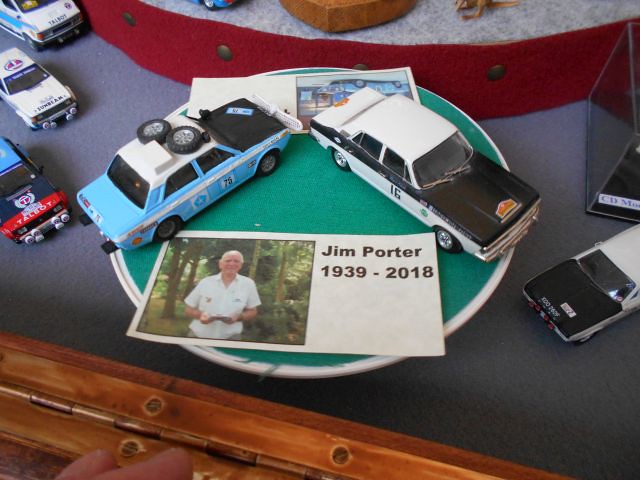 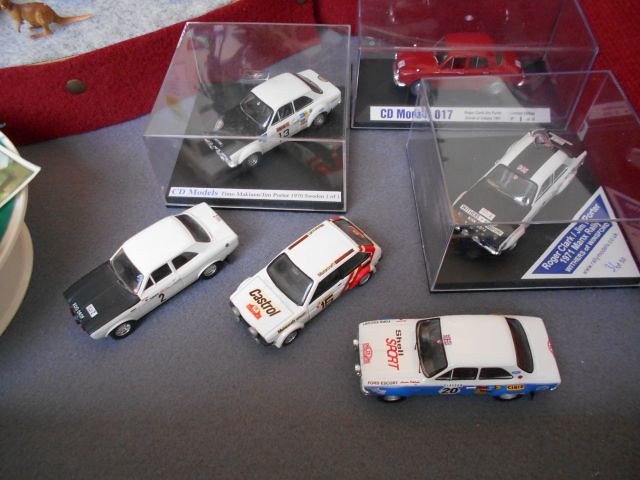 The London to Sydney collection is very cool with the diversity of cars.
“Racing is life. Anything before or after is just waiting.” - Steve McQueen
Top

Indeed. I could easily get into collecting a couple.
My collection
Top

Thanks for posting - both the 1:1s and the 1:43s are truly wonderful. A display like this brings models to life rather than just being in a box on the shelf

I guess there were no Ford Falcons in the 1:1 display though.
Martin
Top

Sadly no Falcons outside.

They list 22 cars from the original 1968 rally that still exist.

Wonderful group of cars and what a great collection they make. Things were so much better back then when they had to carry everything they would need.
Jeff

I’m happy that I still have my old Corgi Hillman Hunter!

The Hillman Hunter was a great model for its time. Do you still have the Kangaroo ? 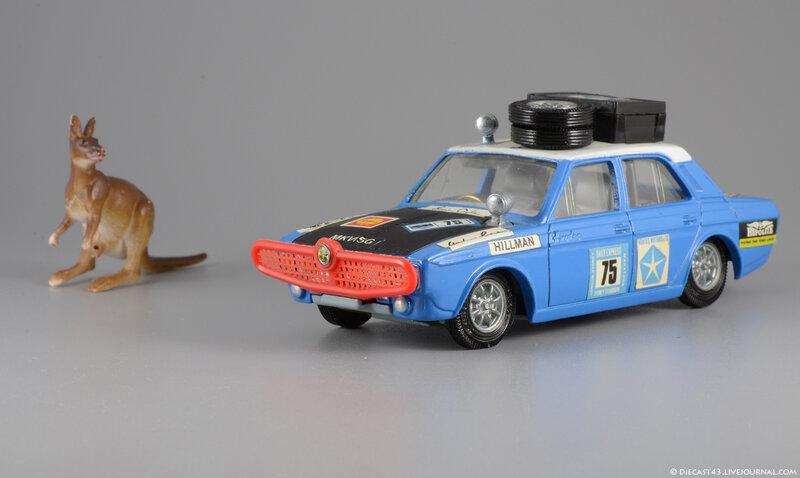 You are absolutely right, in its day this was an amazing model.

Yes it was built as a toy with take off wheels and all the stickers to add and with a kangaroo, hey we knew no better.

BUT in hindsight the ride height is far too low, the body colour was wrong, all the stickers were too big and all the stuff on the roof in the wrong place. Apart from that it was alright!!!

Strangely having made this Hillman Hunter Corgi never maximised it by producing a standard Hunter road car or any other derivations like the Vogue, Sceptre and Minx.

I have never heard of this London-Sydney race, it must have been worse than the early days of the Paris-Dakar rally.

Such sad news about Jim Porter and Gordon Jarvis though.
Paul - "Collecting Motorsport in Miniature; for the passion and its history".
Top

The London to Sydney Marathon was the first long distance rally in modern times.

The World Cup Rally in 1970 was even more gruelling.

So think about how you book your holidays today via the internet, paid for on your card, jump on a plane or the ferry with a ticket you printed out on your computer.

Well in 1968 there was no internet, you went to the local travel agent to book your holiday package, there were no mobile phones, no GPS. Cripes how did we ever survive!!!???

So imagine trying to organise a rally for 120 cars, + the officials, organising hotels, fuel stops, marshals, ferry crossing all by a landline phone and letter and thru the various embassies!!? Every country still had its own currency, there was interminable border/passport controls to negotiate. There was no car tracking, you had no GPS, the route went through Iran and Afghanistan and other modern day hot spots. You followed progress in the Daily Express newspaper not on the internet.

As for the cars these were cars from the 1960s, we few safety features the roll cage was barely that, the tyres were not what they are now and the build quality of the many road cars was not that sophisticated. How any car finished was a miracle.

Since that first London Sydney there was the more well known World Cup Rally in 1970 and a number of other attempts to recreate both.

There are many historic rallies around these days all trying to recreate those early events.

Go further back and check out the Liege rallies of the 50s. These were long distances rallies, where competitors drove for hours with no sleep on terrible roads, in cars that really should have fallen to pieces.

Chris, if you haven't seen it already, there is a Pinterest page by "gerardjuy" dedicated to London to Sydney 1:43 models :

https://www.pinterest.com.au/gerardjuy3 ... 3%A9duits/
“Racing is life. Anything before or after is just waiting.” - Steve McQueen
Top

Very good thanks for the link I have passed it onto Andy B to help him with his collection.

Love the Sprinzel Midget with the roof box. How anyone thought that an MG Midget was a suitable car....

Next anniversary is for the World Cup Rally in 2020.

Andy's main collection are models of these cars.

I got him to build up a good collection for a display at Race Retro back in 2010. His ambition is to do a model of every car.

But like with the London Sydney cars its finding photos of every car, colour is better and then trying to work out what every stickers says.

The Hillman Hunter was a great model for its time. Do you still have the Kangaroo ?

Great thread and as usual Chris an impressive display of models.

As you say those were "different times" Some of the stories I've heard about the original long distance rallies are like the stuff of fiction where kidnapping and assault of fellow competitors, use of amphatamines and lets call it "wild partying" as this is a family forum, were the norm.
Top
Post Reply
19 posts • Page 1 of 1