Apologies for the dust but plinth is solid perspex and it generates static.
Cheers,
David

There was an article in a recent issue of Auto Italia Magazine about cabrios that left the Ferrari factory as coupes before getting the treatment. It's a shame Ferrari never put this in their official line up as it look superb in both body styles. Excellent in 1:43 too.

We're used to seeing official factory Daytona Spiders and there are several aftermarket conversions around. At Concours Italiano '96 (Carmel, California) I saw the Stramann Converted F456 chop top in black. Not sure that it was quite as tasty looking as your 365 GTC/4 cab though.
Top

Bought S/H at the same time as Ferrari365 GTC4 Cabrio. 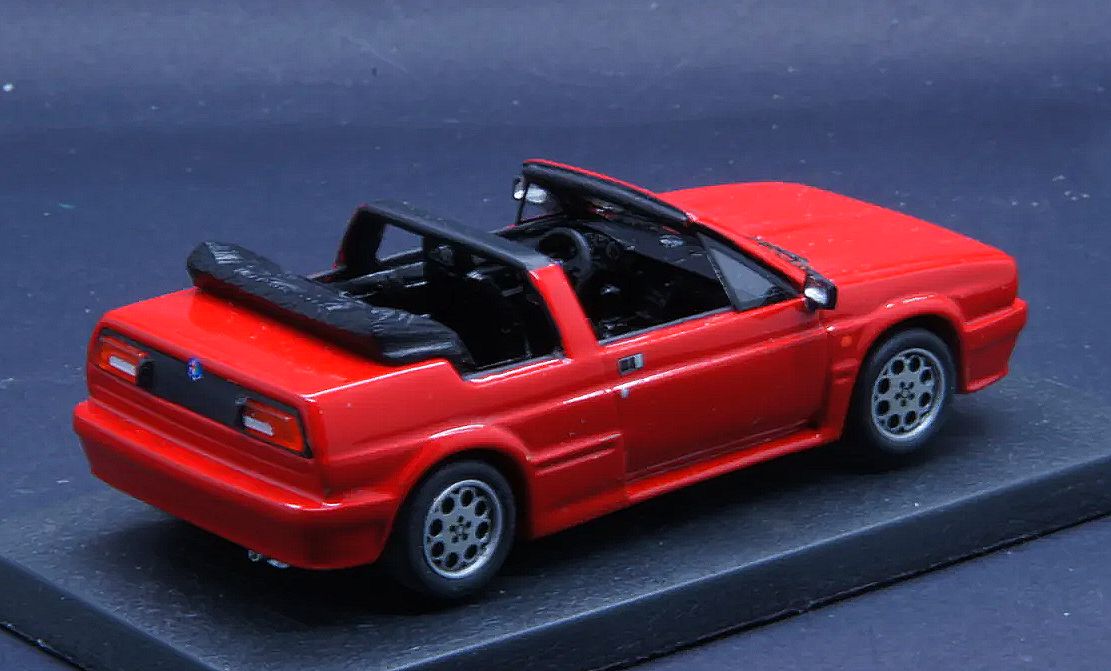 So who took a hacksaw to what is a lovely Coupe shape before it's roof was lopped off. It sure aint pretty now!
Top

That is very cool and pretty unique. Love the Ferrari also.
My collection
Top

Both are a fantastic way to start the year David, but the Alfa takes the cake in my book, even if some of the looks have been lost as Iain says.. Not a car or model I was aware of.
Martin
Top

Then I realized that car had no roll bar, 2 seats, and while not beautiful was maybe just a tad easier on the eyes? Do very much like the Ferrari. The standard tin top is said to be a far better car than the vaulted Daytona - not that I would ever know from experience

You Can LIVE in a Car, But You Can't DRIVE a House
Top

Been after this one for a while (see 2019 Wish List).
It will get etched wheels before it is much older!
Cheers,
David

I've never heard of Kenna, but that model looks great.

Kenna Models, I know this name, is it white metal?

Interesting adds. Better make sure you support the AC when you replace the wheels; the etched versions will look a whole lot better - until they buckle under the weight.
Top

In comparison to ixo that it replaced. To be fair, not a lot in it!

Good move. I wonder why your Ixo version is red. I have the Ixo, and mine is burgundy, about the same color as the Minichamps.

This Delahaye found nice place in your collection. One of the most beautiful cars ever made. At some point I had around 10 of of these tear drop shaped masterpieces. The Mullin is the better model, I had both at the same time, Ixo is good if one can find it for good price.
Bulgarian diecast community - http://diecastcarsbg.com/
Top

In comparison to ixo that it replaced. To be fair, not a lot in it!

I have to disagree; the MC version is better in a host of ways. The stance is more accurate and the chrome details - screen, grille, trim and particularly the headlamps (I hate headlamps with eyeballs!) are superior to the Ixo.
Top

I have been after this model for a long, long while. Expensive and as rare as hen's teeth.
If Jerry hasn't got one I'd be surprised!

It’s understandable if you don’t recognize the name. Only about 275 of these Italian-named roadsters were made between 1954 and 1955, representing the last gasp of a company that started out making motorcycle sidecars.

There’s a bit of AC Ace in the stylish face, some MGA in the tail, and a Triumph under its bonnet. The cozy cockpit was trimmed in leather with proper Jaeger gauges.
The sporty little Doretti was born out of Swallow Coachbuilding, formed by Sir William Lyons to construct sidecars, coachbuilt Austin Sevens and ultimately his own rakish SS. By the mid-1930s, the company changed its name to SS—the brand that would eventually become Jaguar—while spinning off the sidecar business in 1945 to Helliwell Group.

Helliwell moved their operations to Walsall Airport in Birmingham. Three years later, they were swallowed up by the Tube Investments Group.

As sidecar sales declined, the company wanted to create its own sports car to battle with Britain’s then-growing crop of roadsters from Triumph, MG, Austin and others. So Frank Rainbow designed a two-seat roadster that would bear the Doretti name. The premier model was built in nine months and shepherded to New York in 1953—first on an ocean liner by Rainbow, then by plane to Los Angeles.

The Doretti design was based on a strong tubular chassis frame with three-inch-diameter chrome-moly steel tubes on the sides. Thanks to a relationship with Standard Triumph, the TR2 donated its 1991cc, 90-horsepower Triumph TR2 engine, four-speed gearbox and rear axle. The Doretti’s engine sits low and back under the bonnet, which is highlighted with a teardrop-shaped bulge needed to clear the cam cover.

The aluminum body—6 inches longer than the TR2 and 3 inches wider—is a tight design. It sports a hint of 1951 Ferrari 340 America in the polished five-bar grille that sits upright between two prominent Lucas headlights. Petite turn signals sit like lollipops atop polished spears that cover the join between fender and nose. A straight-ribbed bumper with small overriders balances the front end.

A bit of Austin-Healey 100 is visible in the way the front wings rise aft of the headlight rings, but the front overhang is very small. Meanwhile, the front wheel arches frame 165SR15 Michelins that are fitted to black steel wheels. These units are brightened with a trim ring plus a hub cap sporting the Doretti green-and-white checkered flag motif.

A chrome spear accents the gently rounded flanks as the beltline dips slightly—just aft of the beautifully engineered windshield frame. Rainbow’s design really shines here. The rear fenders form an elegantly rounded hip before dropping into a sharp tail that recalls an MGA or Austin-Healey; diminutive lamps top off the look.

The chrome gas filler cap forms a nice accent at the top of the tail’s design. The tightly drawn rear bumper is accented aft of both rear wheel wells with polished chip protector wings, and they add a touch of American flash without being gaudy.

Under the front-hinged bonnet of Entenza’s current Doretti, a standard TR2 engine with twin side-draft carburetors sits beside a build plate. It proclaims that this is a 2-litre car with engine No. TS4288E, chassis No. 1208 and body No. 5208.

This example’s interior is simple and sporty, although one must first step over polished steel sill plates engraved with information that couldn’t have come from any other car: “A SWALLOW PRODUCT – THE AIRPORT – WALSALL – ENGLAND.”

The dashboard carries a standard Triumph auxiliary gauge (oil and amps on the left, fuel and temp on the right) and a switch pod in the middle. There’s a 6000 rpm tach on the far left and an optimistic 120 mph speedometer on the right of Entenza’s right-hand-drive model.

A padded red leather dash top appears to be secured to the cowl with polished metal staples, as do the padded door tops. Red leather seats with pleated inserts and black piping flank a stubby four-speed with a small black knob and tiny parking brake lever. The steering wheel is classic TR2: three lightweight steel spokes, a black hub with a horn button, and a turn signal switch on top.

Storage room is tight—padded pockets adorn the door panels, while the trunk offers a wee bit of room outside of its spare tire and tool kit. The top stows flat under a split tonneau held down with Tennay snaps.

I know about the Doretti, fabulous car! I didn't know a model even existed but if there's any collection this should be in then it's yours. Congratulations!
My collection
Top

Congratulation David, that's a smashing addition. It looks a lot more modern than its TR2 underpinnings and it's interesting Triumph didn't try to buy them out and use design for the TR3.
“Racing is life. Anything before or after is just waiting.” - Steve McQueen
Top

Cool (and rare) model. A very 1950's Brit sports car. Derrez have made some interesting models of Triumph derived cars over the years. I would love them to have a go at the Vitesse based Bond Equipe 2 litre and the Peerless, promised by Esval but showing no sign of ever materialising.
Top

Wonderful addition David. It certainly looks much more sleek than some of its contemporaries.
Martin
Top
Post Reply
60 posts