As a fan and collector of race transporters, I'll admit Matrix got my interest with the release of this VW T2 transporter with 'Porsche' and 'Carrera' marketings. Was this something used by one of the privateers to haul a Porsche 911 around the tracks of Europe in the 1970's ? 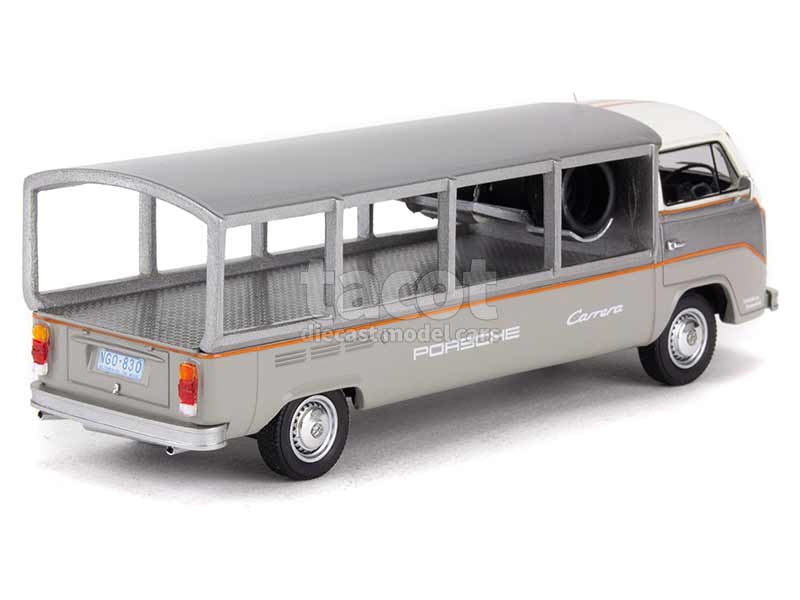 I went digging for some more information and was a little disappointed to discover this transporter isn't from the 1970's, wasn't used in Europe and didn't haul a Porsche 911. In fact, this transporter comes from my own back year in Australia !

Here's the transporter with its load. Note the special narrow wheels to fit it in the back of the VW:

The transporter was put up for auction in 2017, but passed in (meaning if failed to reach the reserve price):

So in summary, the Matrix transporter is a pretty useless model for most collector given its very narrow use.
“Racing is life. Anything before or after is just waiting.” - Steve McQueen
Top

The model may not be of much interest to serious collectors but I am intrigued by its use. The photos you have shown would seem to be from a more recent historic meeting (at Sandown maybe) rather than from back-in-the-day. I also don't remember a Peter Jackson sponsored Ralt from our Formula Pacific days and in the photo the driver is wearing a modern helmet.

I was thinking it may have an association with Alan Hamilton who was the Australian Porsche Distributor back in the '70s and '80s. He was an active driver and sponsor under his Porsche Cars Australia banner in those days. Alfie Costanzo did run a Peter Jackson/Porsche Cars Australia sponsored Tiga Formula Pacific/Mondial car in the early 1980s. However, the following link suggests that it is a more recently constructed vehicle.

A strange vehicle to be done in 1:43 form, unless the current or previous owner wanted a model and Matrix have decided to do a limited run to catch the VW and Porsches freaks out there.

P.S. - for the record the website above is NOT one I visit on a regular basis - just a random Google

Thanks for the research. Luckily, the price already kept me from adding this by itself.

P.S. - for the record the website above is NOT one I visit on a regular basis - just a random Google

I'm not touching that while I'm on my work computer Martin

Here's a work friendly website where the original pictures in my post came from, which makes reference to the 2016 Sandown Historics and Philip Island Classic. You can also see the Victorian number plates in this picture.

https://www.curbsideclassic.com/blog/ra ... ansporter/
“Racing is life. Anything before or after is just waiting.” - Steve McQueen
Top


P.S. - for the record the website above is NOT one I visit on a regular basis - just a random Google


P.S. - for the record the website above is NOT one I visit on a regular basis - just a random Google

It’s all good Jeff, she was sitting next to me in our office when I was looking at this. It seems to be just a bunch of guys who like cars - nothing that’s NSFW.

It is strange that it does not mention the date of the conversion, it might be a modern work on an older chassis, don't you think? (or maybe I missed something)
"A picture is worth a thousand words, but a model is worth a thousand pictures." Harley J. Earl
My concept car 1:43 collection: viewtopic.php?t=1096
Top

This was built by Wolfsburg Automotive in Geelong, Victoria (established in 1979) for the current owner, who is an avid car collector and historic racer. It has nothing to do with Porsche or any official race car. If that car is 7 metres long, then the loading ramps must be at least 14 metres long so I think you’d need rather large plums to get your classic car on and off that thing without looking like a complete idiot.

Paulius43 wrote: ↑
Fri May 22, 2020 6:10 am
It is strange that it does not mention the date of the conversion, it might be a modern work on an older chassis, don't you think? (or maybe I missed something)

That would get you a very nice lightly used recovery truck with winch here, an Iveco or somesuch. It would be faster and more comfortable, never mind more practical. But I guess we wouldn't be discussing it here then...
My collection
Top

This, though expensive, looks good too. I cannot find any pictures of the 1:1 though...
My collection
Top 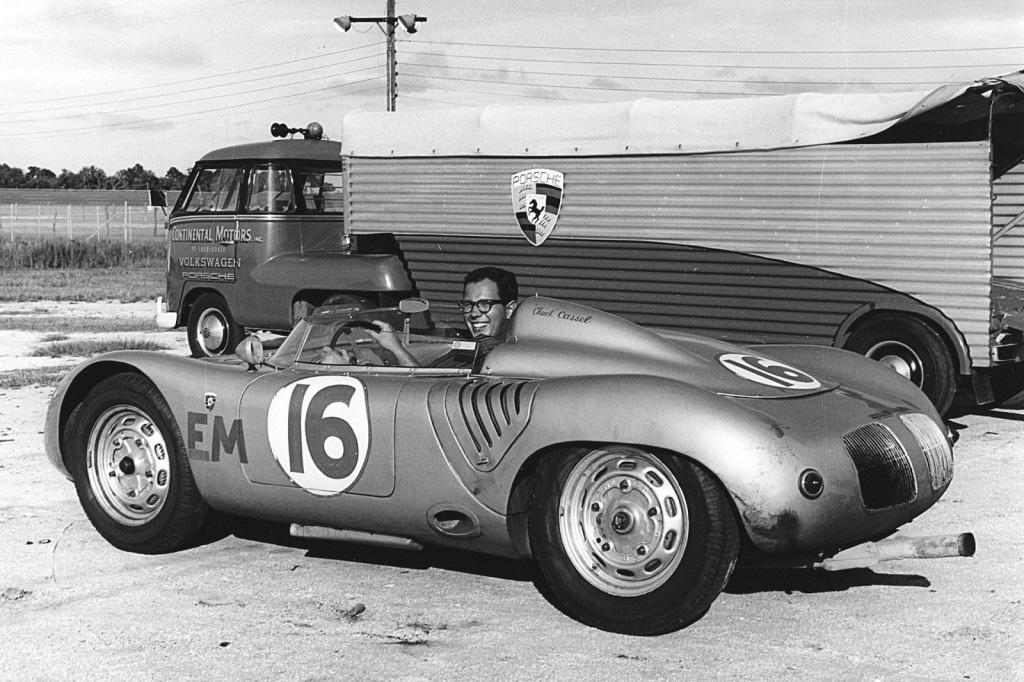 Nice, thanks. That would get really expensive though... EUR 180 for the transporter alone and you'll need to find that specific... 550?
My collection
Top

It's a good thing they did almost all their racing in Florida where there weren't many hills. I hate to think how hard it would be going up hill, but going down with that tractors short wheelbase, one would hope for really, really good trailer brakes!

. Chuck Cassell raced a number of different Porsches, so wouldn't be too hard to make one or two of his cars to go with it.
Jerry
Old Irish Racing
www.oldirish.com

Not striclty on the subject from the title, just wanted to warn anybody who would consider buying Schuco's T1 Continental Motors transporter that it doesn't fit most of the Minichamps models. My initial plan was to get the 356 Pink Pig in it, but it didn't fit. I also tried a Minichamps 718, and a 356 Speedster, well, the Speedster almost got in, but the windscreen was in the way. The only car I could roll up inside was Brumm's 550 Carrera Panamericana, which to me looks under scale. Hope my adventures with this model helped with considering or reconsidering the purchase: 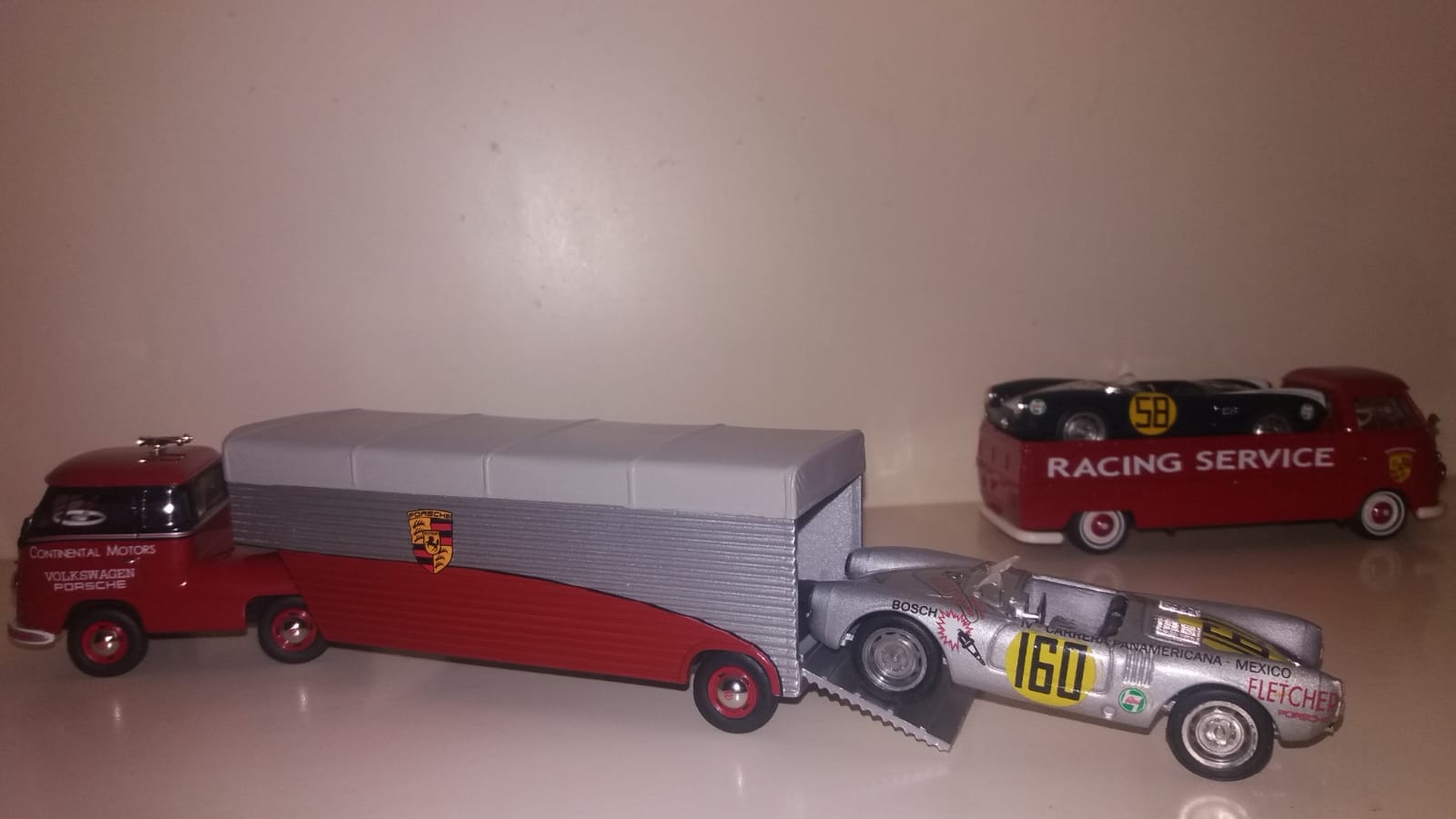 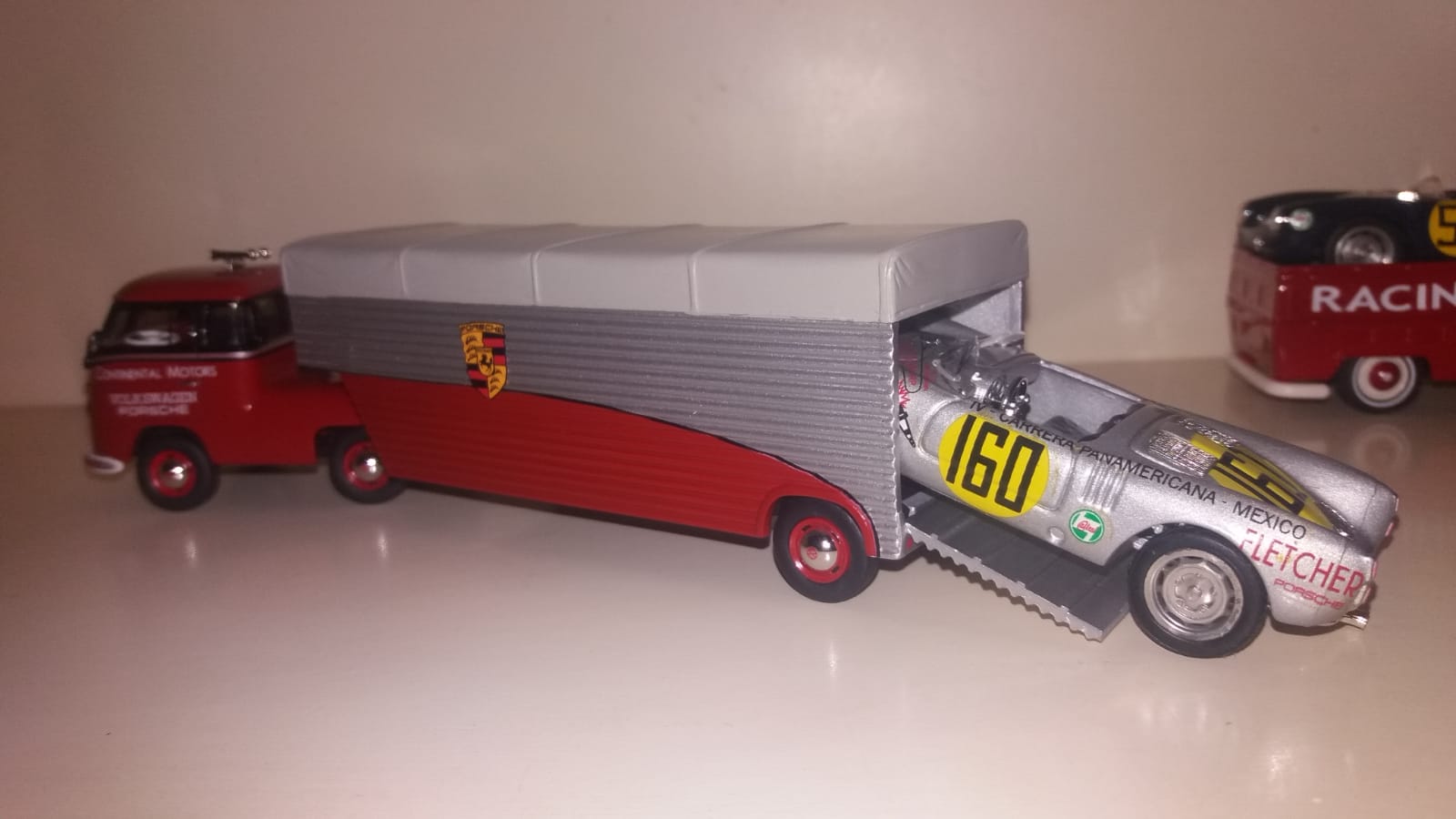 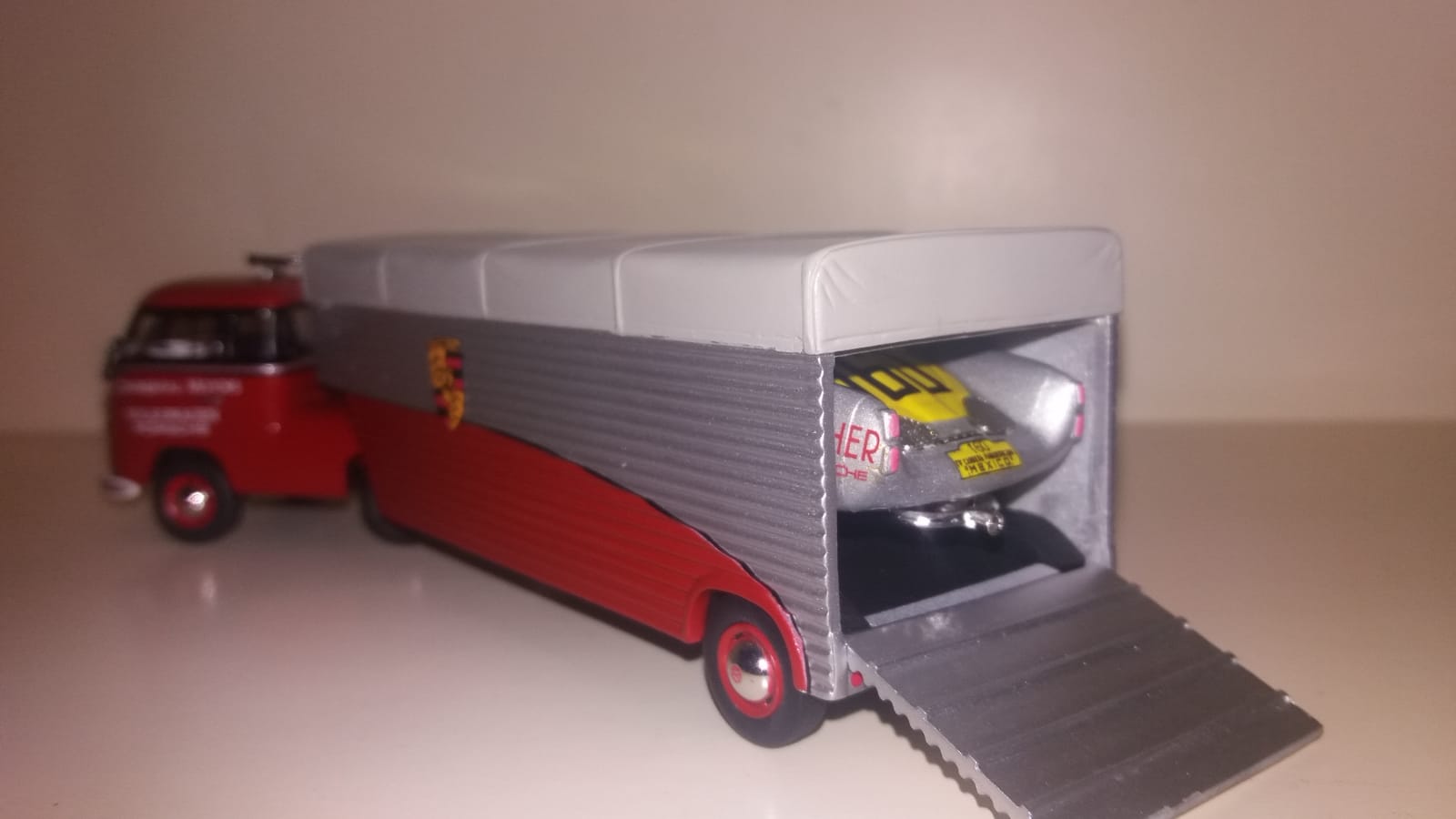 And on the subject: After I got away with that, I also ordered the Matrix T2. Hope I can find something period correct to fit on. I will return with pictures.

Hmmm... thanks for the heads-up.
My collection
Top

And that is why I havent bought this T1 myself despite being able to get a cracking deal on one. I saw some pics of this on the S143 Facebook page and couldnt believe how small the trailer opening was and how out of scale it looked when a car was placed on its loading ramp. Even that tiny 550 looks ridiculously huge in that trailer.

Autocult's T1 Langpritsche lurking in the back isn't better either. On the prospect they show a picture of the real car carrying a 550 with place to spare back and forth, well the models deck hardly fits the under scaled Brumm 550. Manufacturers play around dimensions, and you have no chance of knowing until somebody doesn't swallow the bait. I won't complain on the visual appeal of my ensemble, though (I know it's historically innacurate, I just don't care). 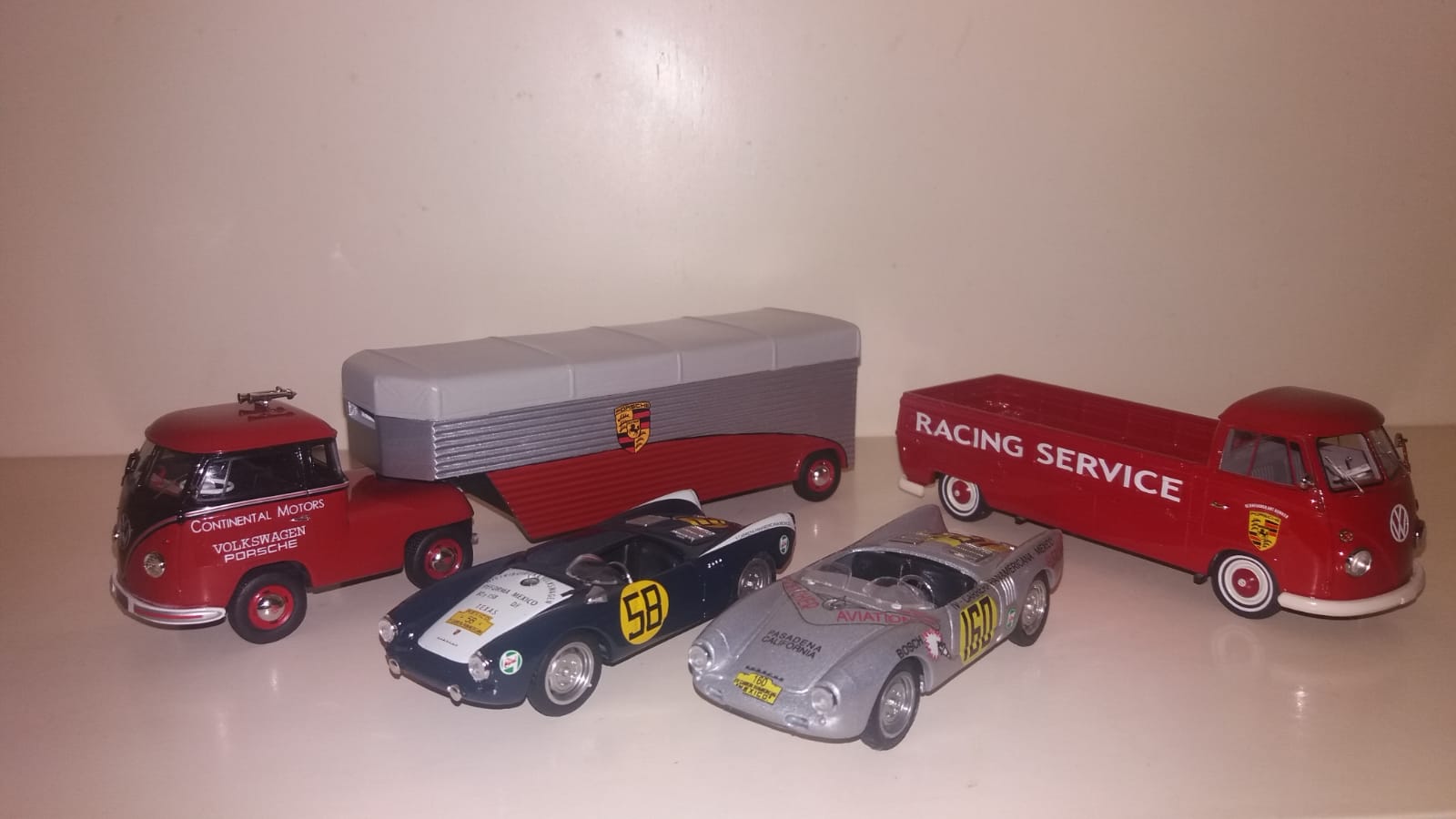