Love at first sight with this model, one of the most stylish race car transporters ever: 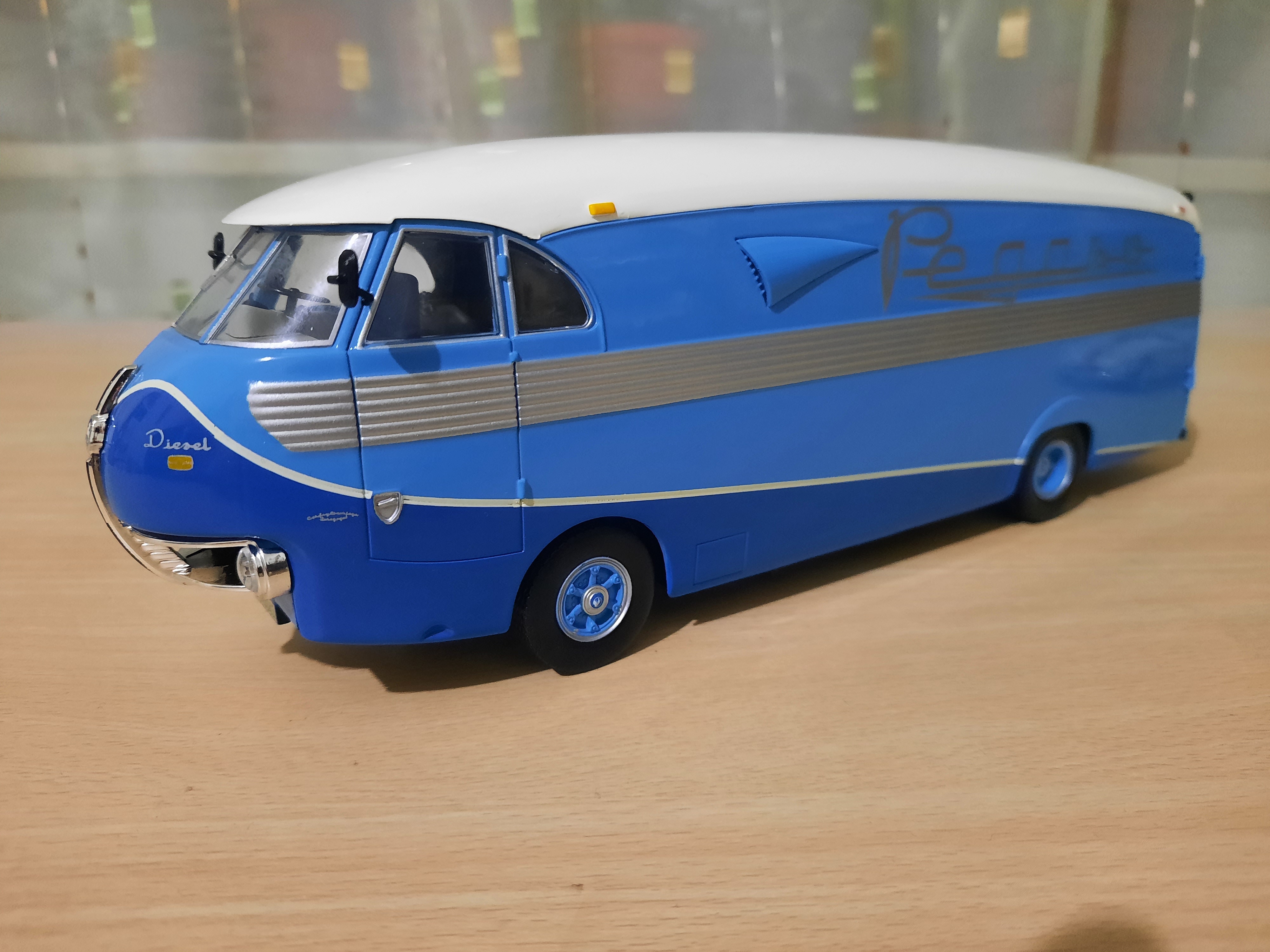 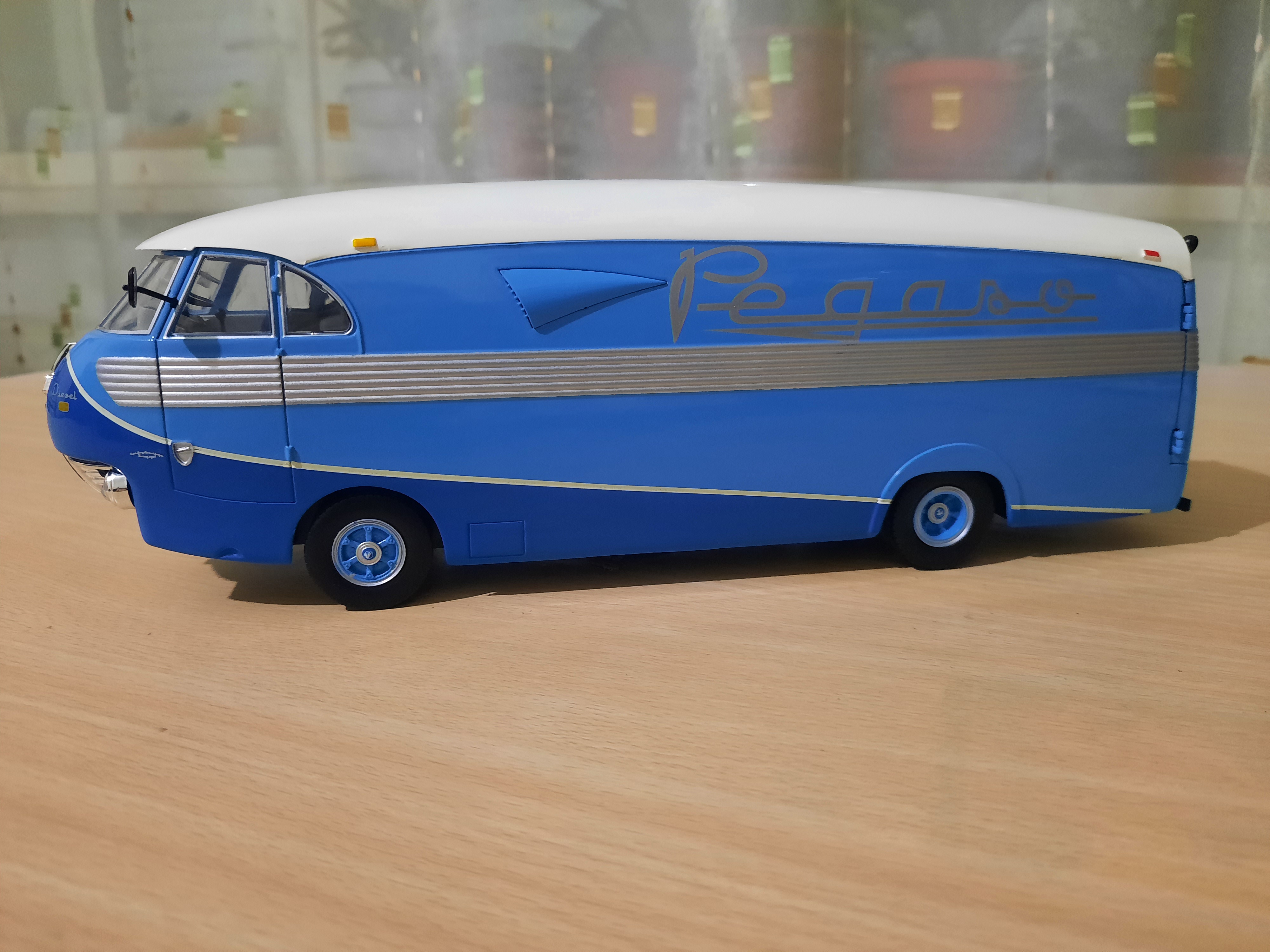 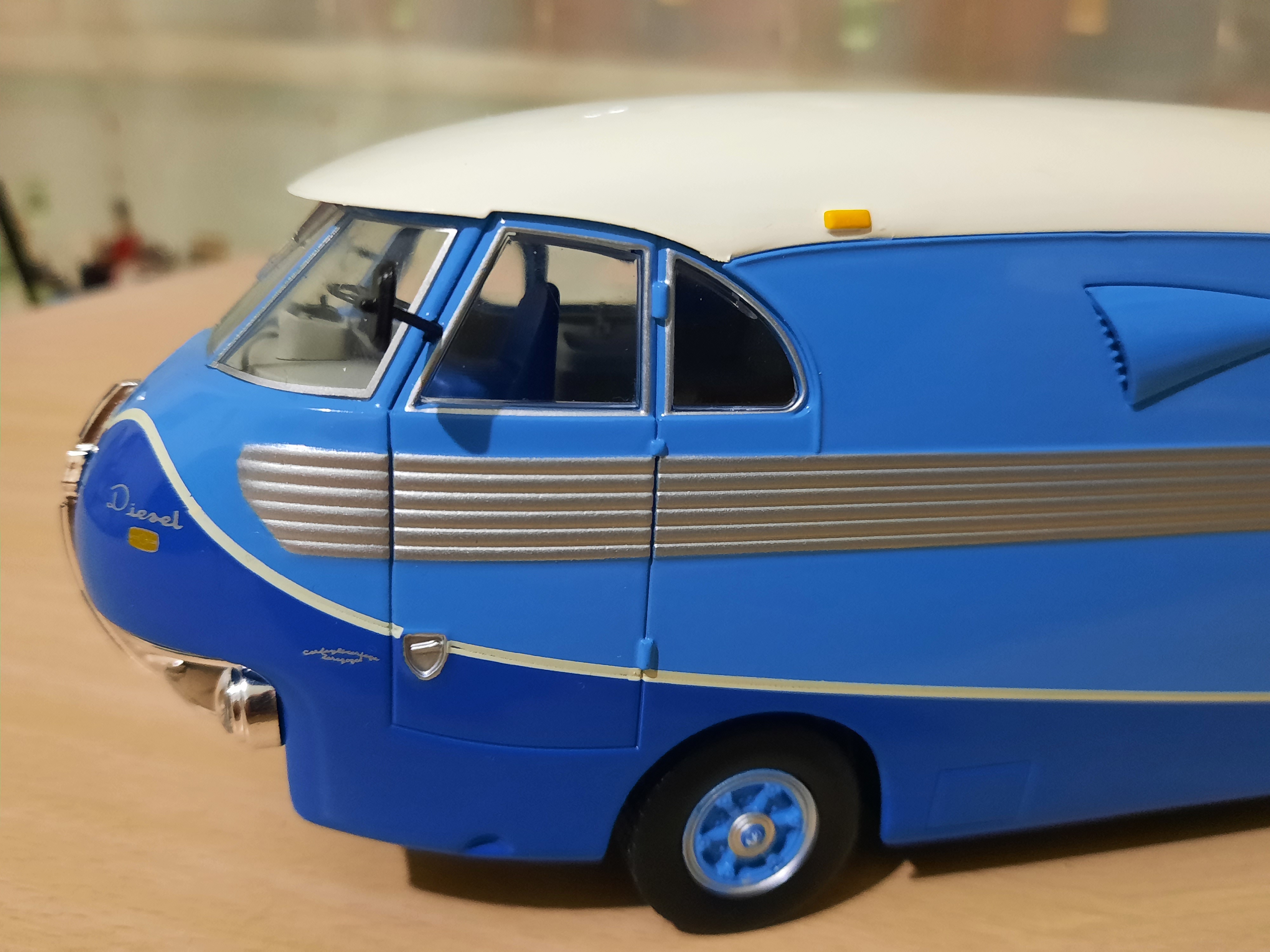 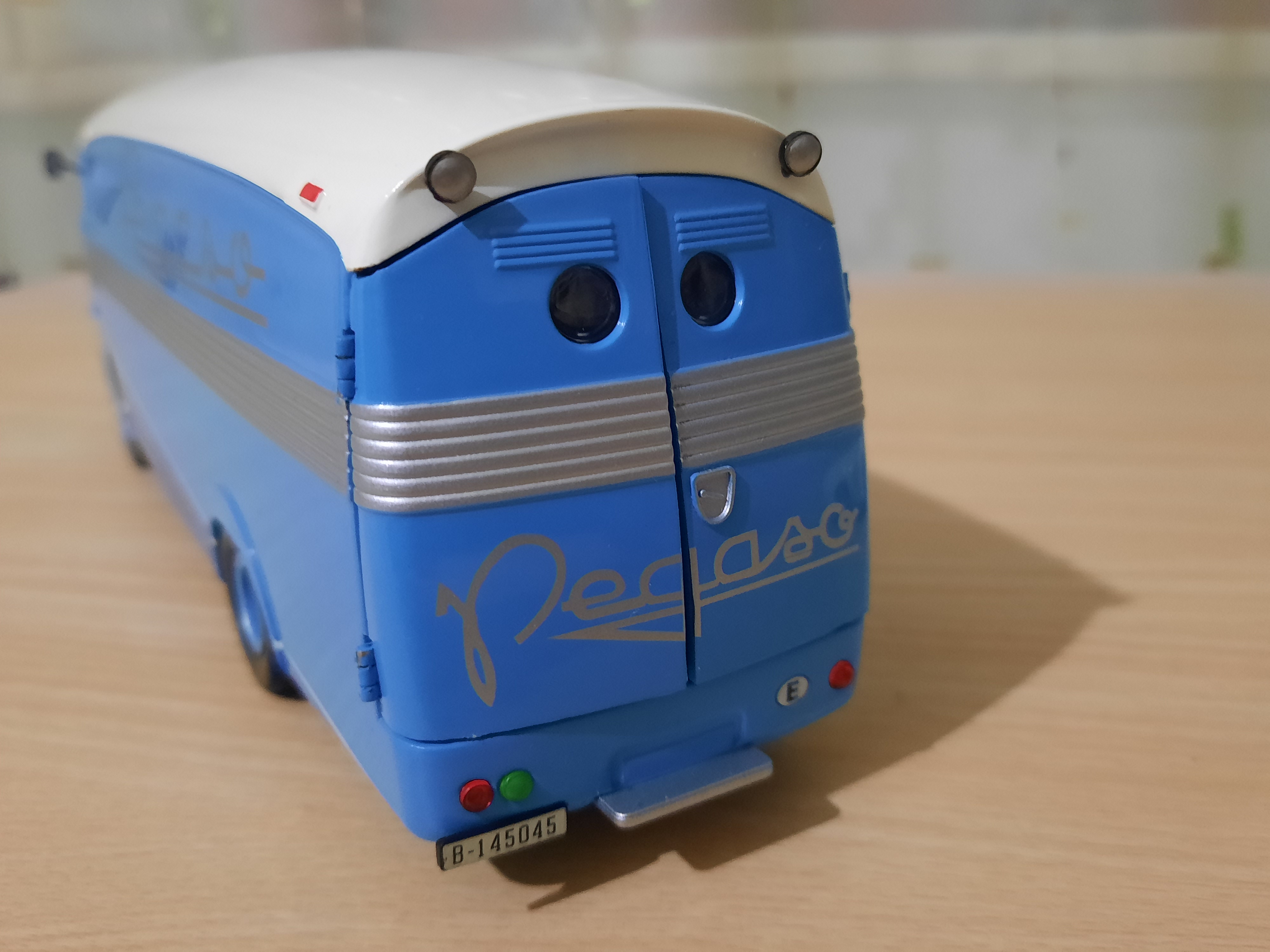 Together with its precious load, the Z102 Le Mans car: 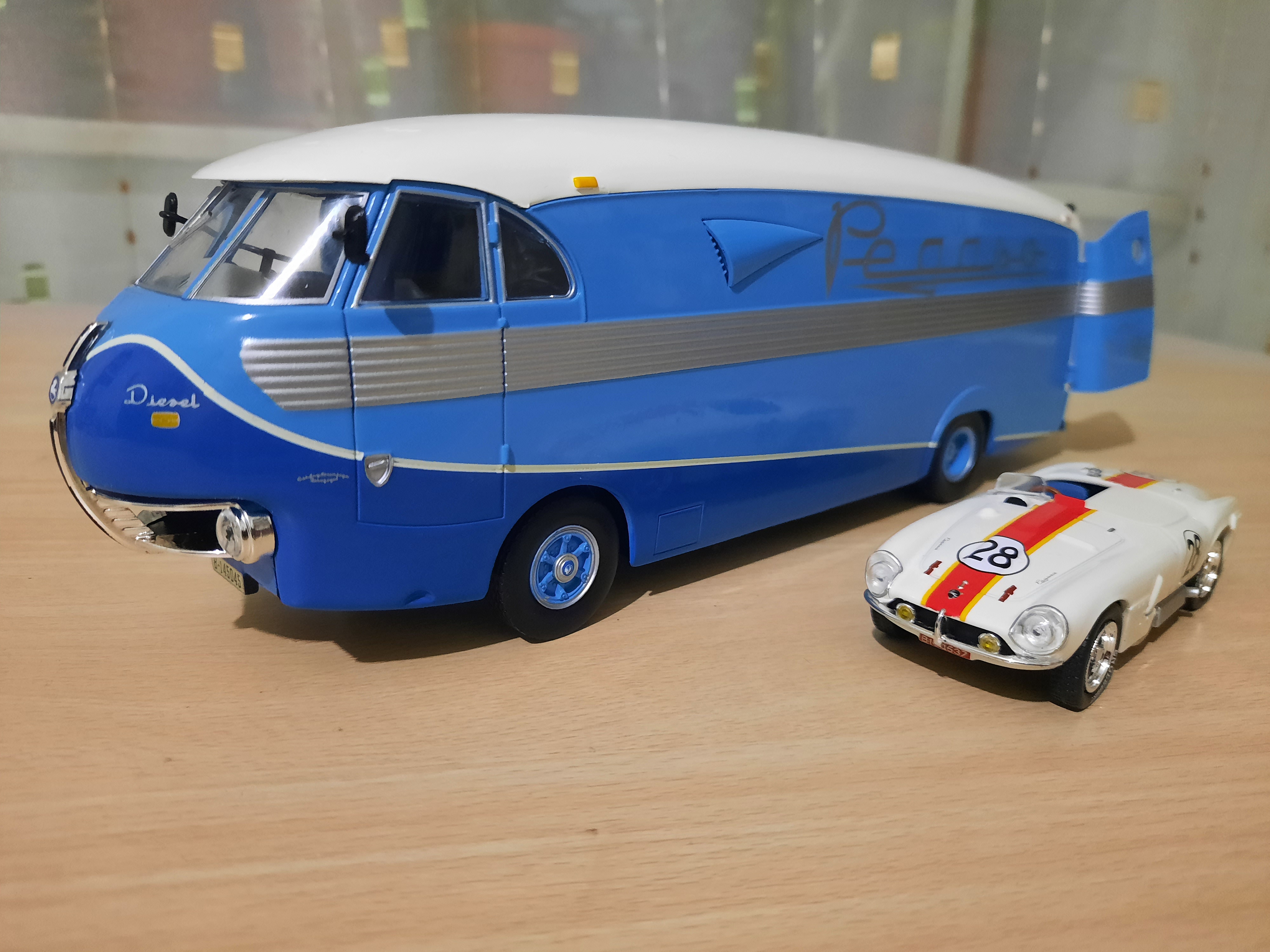 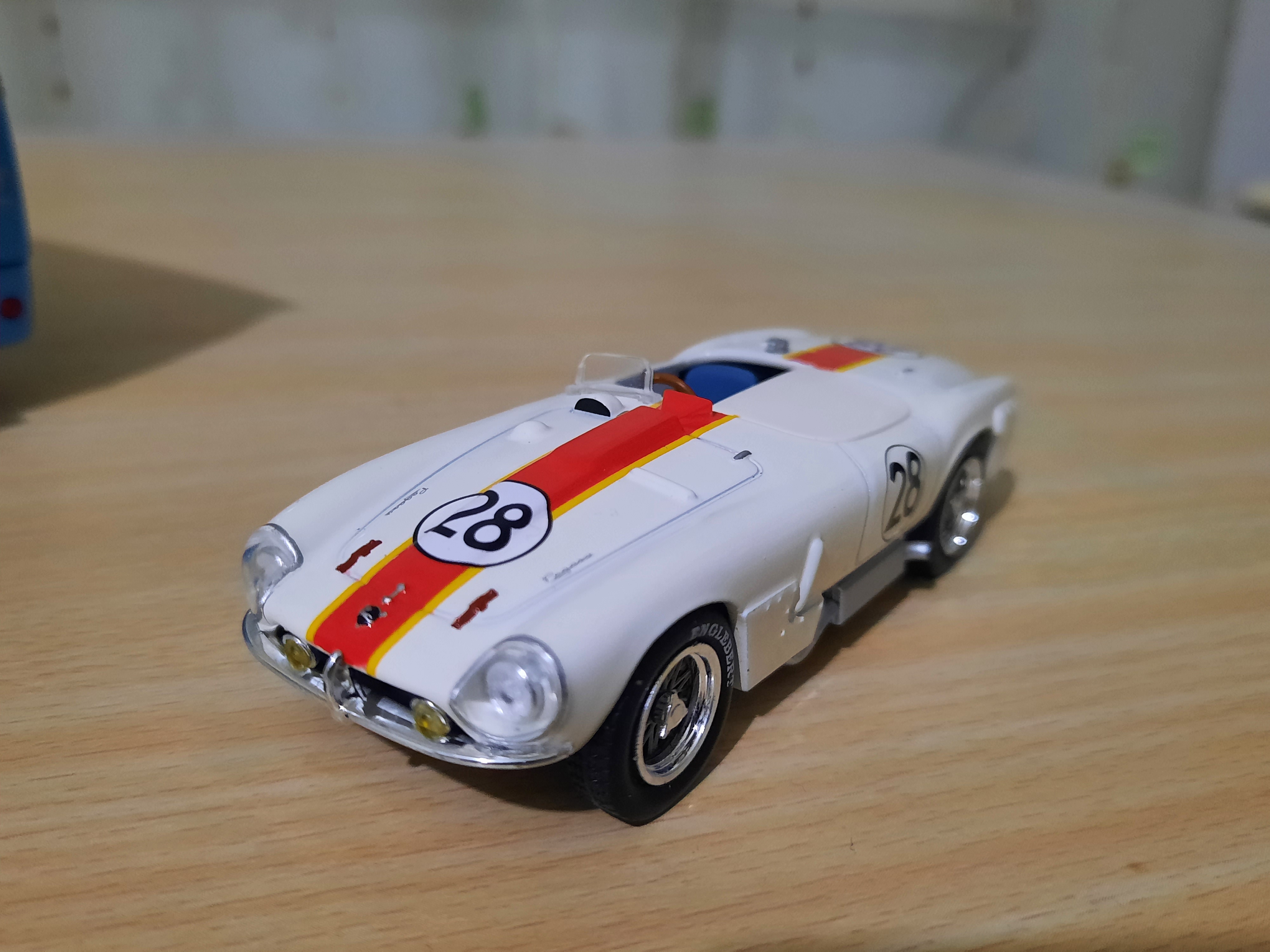 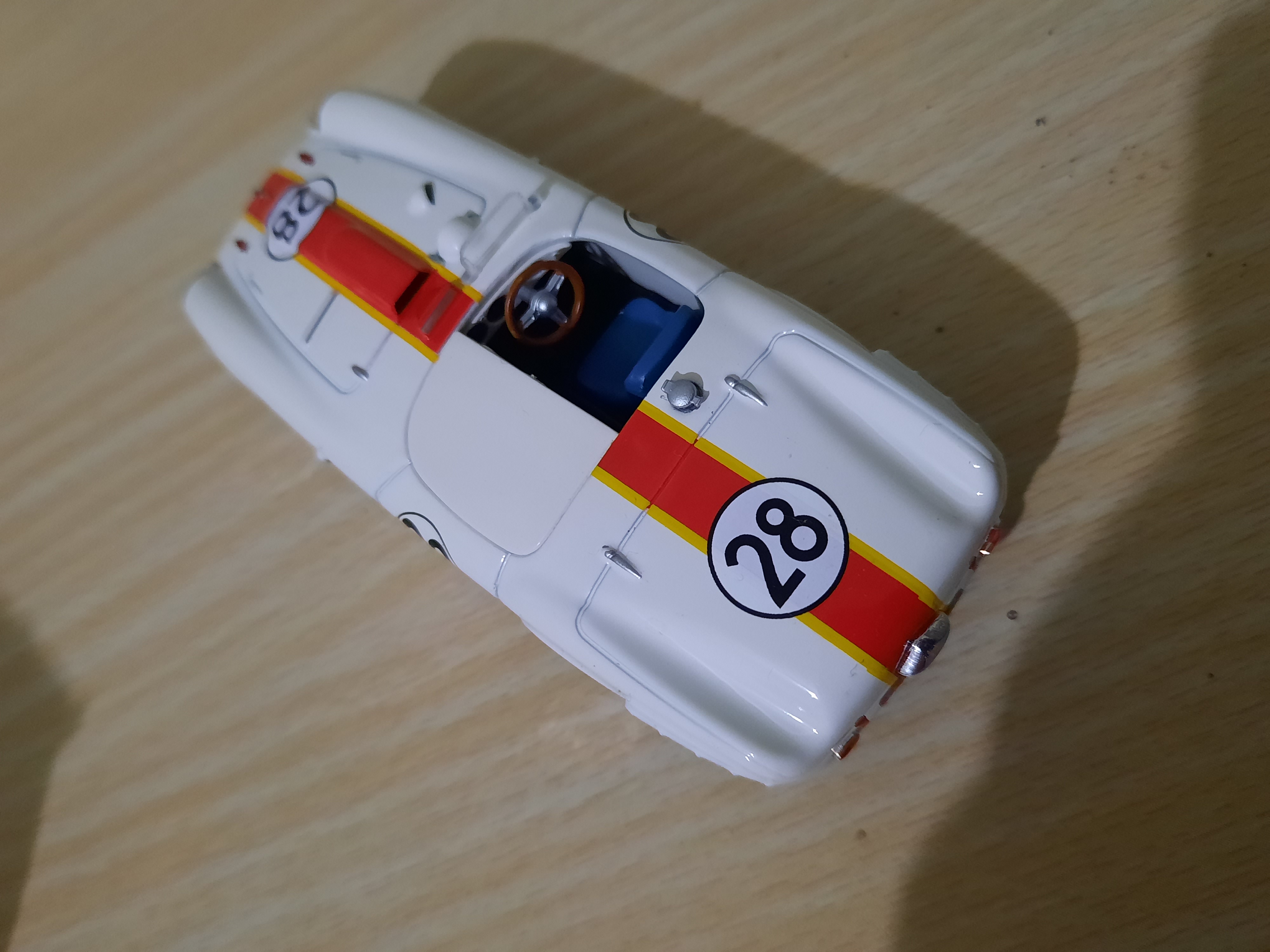 Undeniable members of the same family: 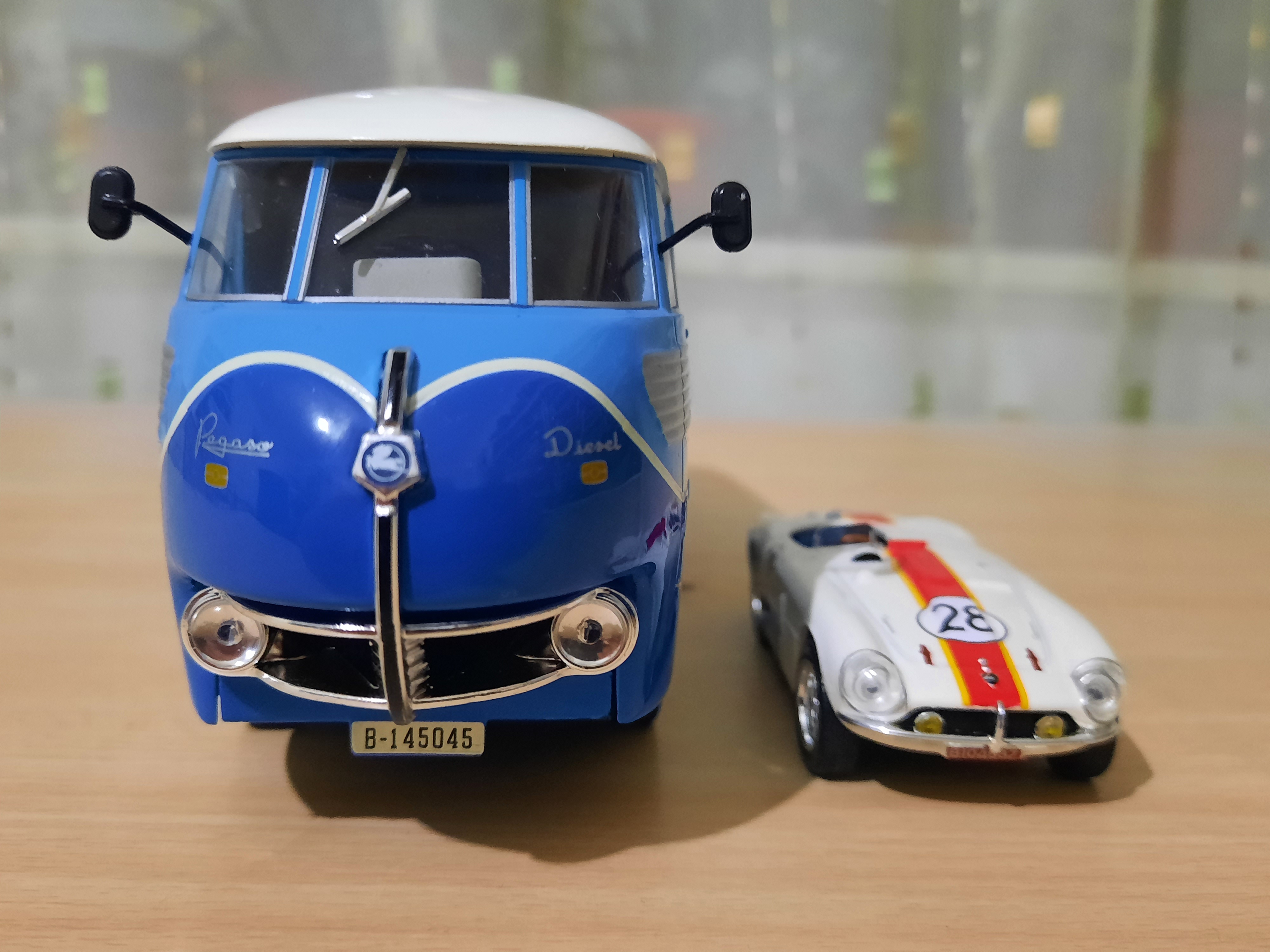 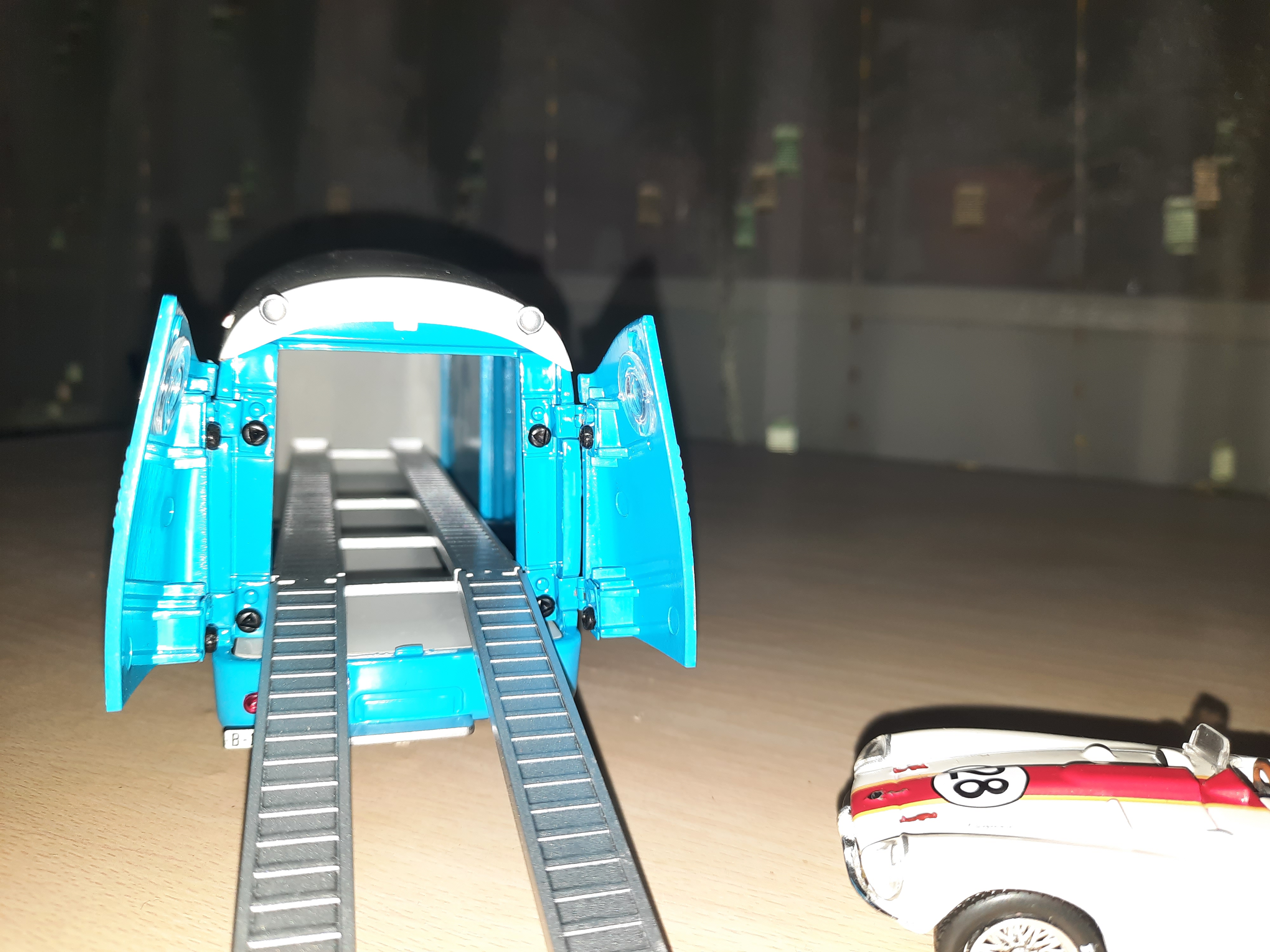 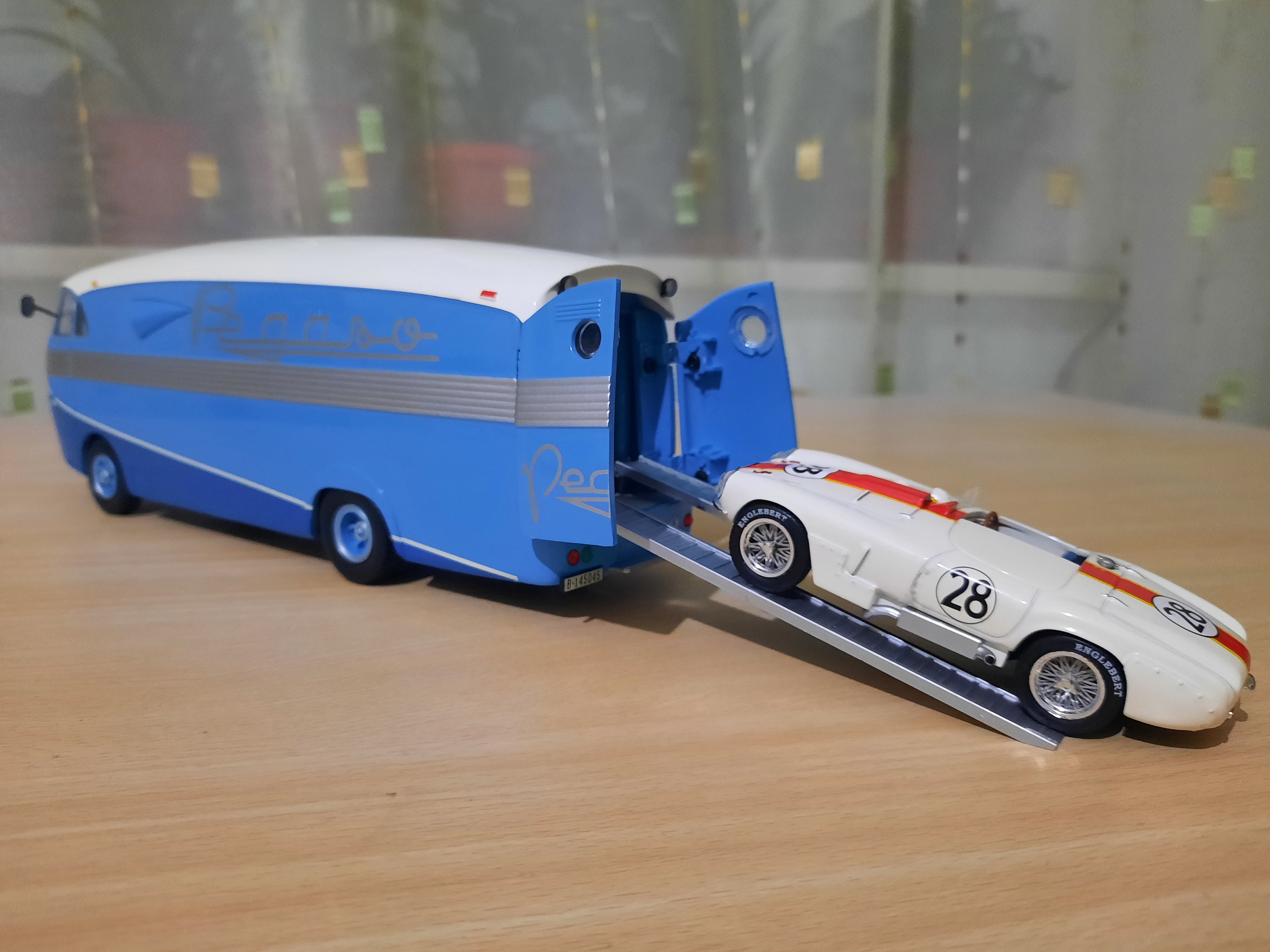 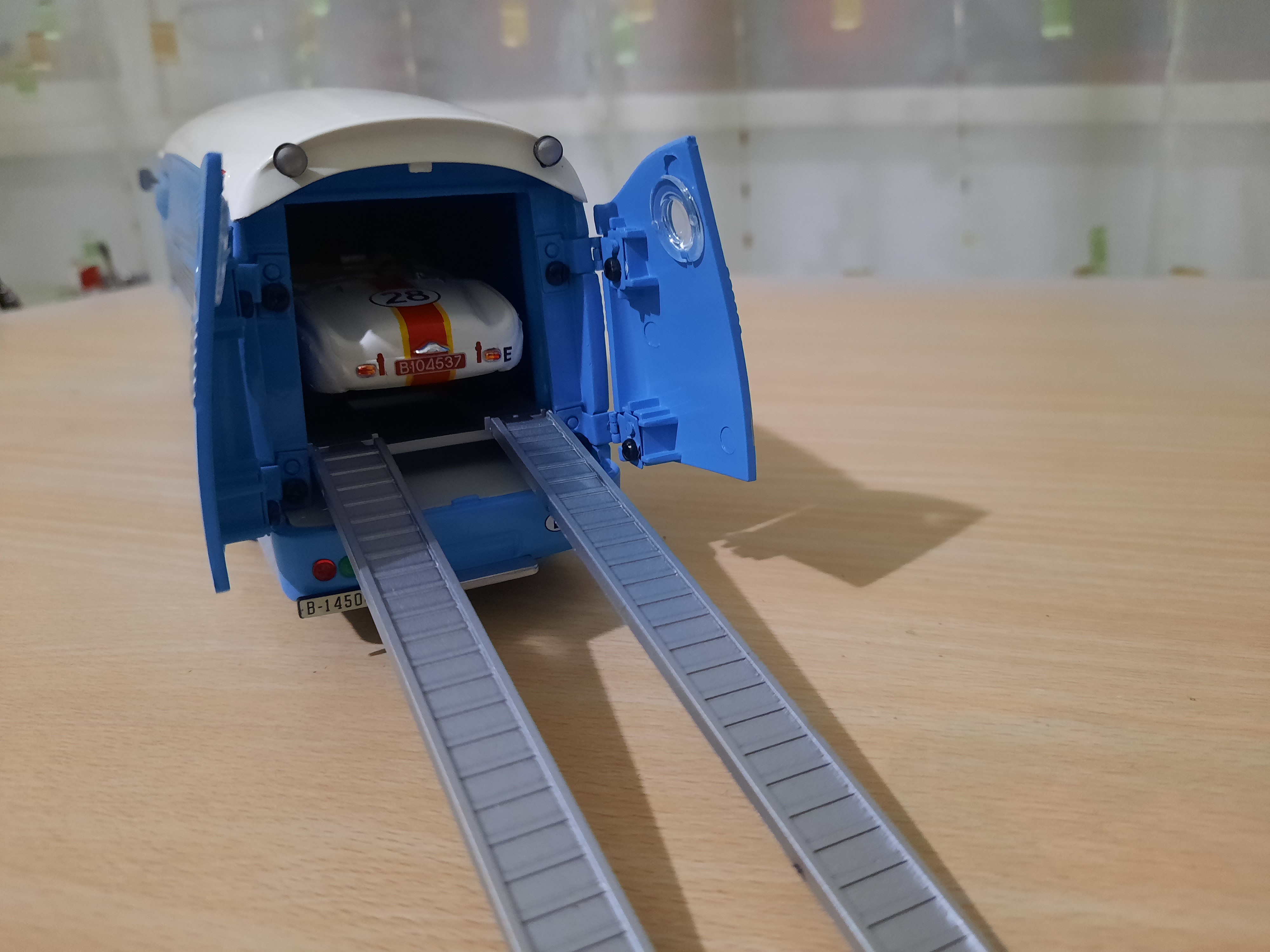 Three manufacturers gave it a go at this scale as far as I know, none of them is flawless. First was the Modeltrans, which is rare, stupidly expensive, and from what I could deduct from the pictures, the nose is way off, too rounded and short. And the back doors are unopenable, since it's a resin model. Then there was the Hispania Models, which is nice, rare, and expensive of course. But it has some horrible doglegs at the back doors, wich was a turnoff for me. This Ixo/Salvat rendition was the closest to my pretentions. What I could not find out is why both Hispania and Ixo choosed to ignore the top vents, and the grey ceiling. Maybe they were added later in the real car's life? The initial model which was white doesn't seem to have them, from the pictures I found online.
Top

That looks fantastic! Would buy it in a heartbeat.
My collection
Top

Would love to add that set to my collection. Unfortunately being on the other side of the world makes that very difficult.
“Racing is life. Anything before or after is just waiting.” - Steve McQueen
Top

How radical a design was that ?!
Top

Thanks boys for the positive feedback! Jager I honestly hope you get lucky and acquire one at a good price. I was also lucky with this, the seller made me a very good offer, with shipping included - mind you it was in Europe though.
Top

Super looking truck and model on all counts. I can't imagine anyone not seeing this and wanting it immediately.
Jeff
Top

Nice one! Congrats on getting one for a good price.. I always wanted a model of Bacalao, but the outrageous prices asked for the incorrect handbuilts always put me away. This diecast could have been a great solution but as Salvat made it a subscriber's present only it is again out of my reach (250+€ for a diecast?)
Hope to get a deal some day, like you!
"A picture is worth a thousand words, but a model is worth a thousand pictures." Harley J. Earl
My concept car 1:43 collection: viewtopic.php?t=1096
Top

That seems a very good price. I remember bidding (unsuccessfully) just on a Z102 last year and I think that went close to Euro 100 by itself which I thought was a crazy price for an Altaya model. Looking on eBay now, I can't see any of the transporters or Z102's in either current or past auctions, so would think you won't find one now for Euro 200.

I think my only hope is that Spark see the strong demand for these two models and produce them somewhere in the future.
“Racing is life. Anything before or after is just waiting.” - Steve McQueen
Top

Let's be honest, the Z102 is nowhere near a 100 euros model. A fair price would be somewhere in between 30-40 euros. Considering the fact that Spark already modelled the Z102 Bisiluro (narrowly missed by me, twice last year) I think there is a fair chance they will turn their attention on the Le Mans racer one day. With the Bacalao I'm not that sure, and even if Spark would release it, it would be a closed resin model, which cuts half the fun of this.
Top

As a Pegaso collector, the Bacalao never caught my attention as I'm not a racing collector. It's nice to see that Salvat with their Ixo based models of their last collection in Spain has reached a great level of quality, in some cases very close to the Ixo regular line. The Bacalao is a good example, specially if we compare it with resin hand made versions at galactic prices. But this die cast Bacalao has the handicap of being a suscriptor present. Very hard to get if you don't join the whole collection and several people are making great businesses with it and it's reaching very close prices to the resin one in the 2nd hand market. Ixo is including little by little in their regular range racing assitence vehicles and the next in joining the market will be the Mercedes Blue Wonder. That makes me the feel that maybe in a near future there would be a Ixo Model sold in regular shops of the Bacalao...
Visit my collection in : http://kekomovil.blogspot.com
Also in Facebook: https://www.facebook.com/KekoRS143/?mod ... _todo_tour

I think so too, as it must be the only way to recoup their investment on this expensive tooling.
My collection
Top

It's hard to judge them for making this model a subscribers only, as it's a halo for many racing collectors. I assume they caught some who really wanted this and just a bunch from the rest, and inevitably they also caught the speculators. I root for Ixo including this in the mainline for the guys who want this (I never got anything good out of exclusivity

). But then again, I think they will put it up on par with some of Schuco's offering. I doubt this will come out as a 60-70 euros model.
Top

I have always wanted the Pegaso Z401 'Codfish' transporter and that looks like a very nice piece! Hard to say when and if I would find one at an affordable price. While doing some research, I came across this transporter which is also based on a Pegaso Z401 bus. Now this would be a cool transporter to have in 1/43 too! 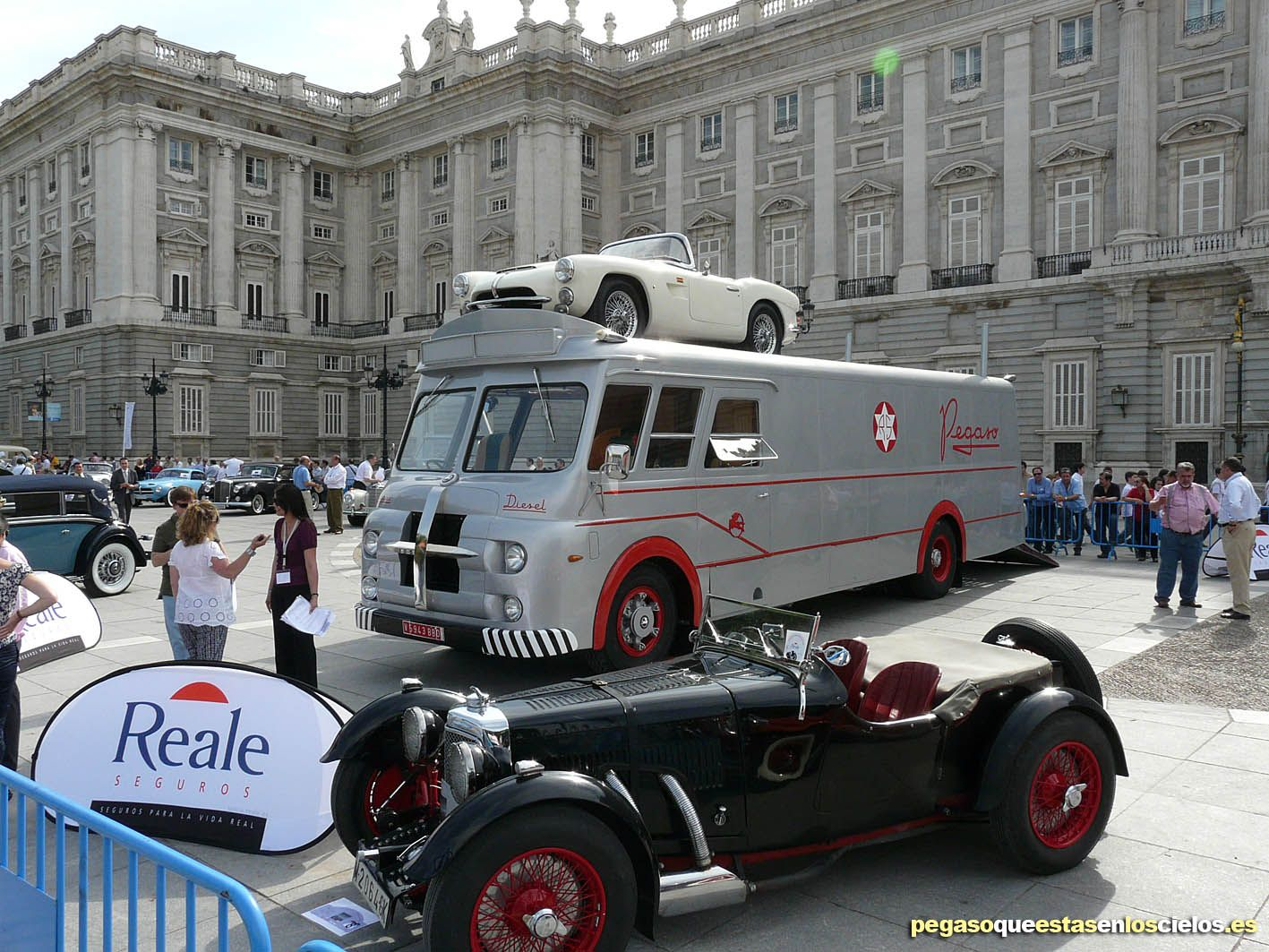 I remember finding the pictures with this grey model, one of them showed that it also has a toilet included.

andor88 wrote: ↑
Mon Jan 25, 2021 1:15 pm
I remember finding the pictures with this grey model, one of them showed that it also has a toilet included.

Now that would be handy!