OM My!: While cruising the internet for service vans, I found this trio of OM Leoncino vans for sale at a retailer in Italy, Art-Toys https://art-toys.co/ . They have apparently taken Altaya vans and done what I plan to do, repaint and re-decal them as race support trucks. The nice thing about OM Leoncino vans is that they were made from 1950-1968, so cover a lot of years of racing. I thought the prices for the work involved was reasonable and saved me having to do it. I found this dealer great to work with, excellent packing and shipping, great communication. Truly authentic, nah, but great looking vans for the back of the cabinet.
Jerry
Old Irish Racing
www.oldirish.com

Very credible period vans, they add a lot of charm and 'life' to the dioramas.
My collection
Top

I can see these being very popular. The Ferrari is probably my favorite.
“Racing is life. Anything before or after is just waiting.” - Steve McQueen
Top

It seems that Maserati may have actually had an OM Leoncino, but it didn't carry any markings ? Should make it an easy conversion Jerry 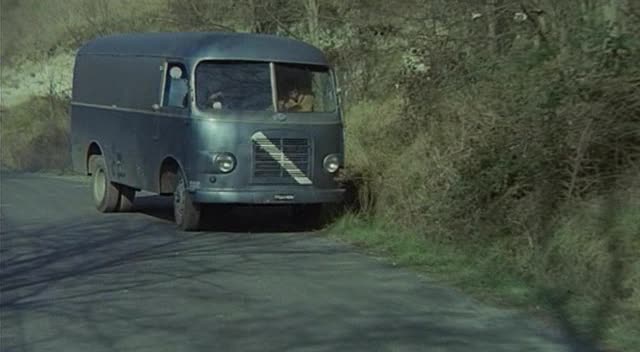 Jager wrote: ↑
Thu Jul 25, 2019 7:04 am
It seems that Maserati may have actually had an OM Leoncino, but it didn't carry any markings ? Should make it an easy conversion Jerry

Now is that gray, or silver blue?

Given popularity of the OM's, they were used by many teams, particularly Italian. Depending on year and sometimes even by race they could be different. I am traveling on holiday right now, but when I get home will post a couple more OM's I think you will like.
Jerry
Old Irish Racing
www.oldirish.com

A couple more race service trucks that I acquired recently. Neither is new on the market. The IXO has been around since 2003 (based on the catalog that came with it) and I am just getting around to adding it. I have seen pictures of the 1/1 van with and without the Renault logo on the side panels. The van came without, I prefer with and added some aftermarket decals. The Tron is one I having been saving for and will go nicely with the Pozzi Fiat support van and the Ferrari Daytonas I have from that team. Verh atmospheric. I recall both types of vans being in use on the streets, the Saviem was familiar because a national firm of building trade electrical suppliers had a fleet of them. I've always liked them as well as the Renault Estafettes.
My collection
Top

. I might have to consider that as a Christmas present to myself.
“Racing is life. Anything before or after is just waiting.” - Steve McQueen
Top

Jerry this is a very imformative thread. This subject is in my "to do one day box" as I love dioramas with support vehicles. Thanks for sharing I will now investigate further.
Paul - "Collecting Motorsport in Miniature; for the passion and its history".
Top

LM24HRS wrote: ↑
Sun Aug 11, 2019 2:06 am
Jerry this is a very imformative thread. This subject is in my "to do one day box" as I love dioramas with support vehicles. Thanks for sharing I will now investigate further.

Paul, glad you like it! I highly recommend adding support vehicles as it gives your collection more 'depth" (and your wallet less heft!)

While they have always been around, there certainly seem to be more continuously coming on the market Jeff. I take that as a good sign that collectors are interested in these subjects and the manufacturers will make more.

It was Christmas in July for me Ian! Pigs will probably fly first Martin

Verh atmospheric. I recall both types of vans being in use on the streets, the Saviem was familiar because a national firm of building trade electrical suppliers had a fleet of them. I've always liked them as well as the Renault Estafettes.

Since these never made it to our shores Tom, they are not as widely known, which is part of the appeal. Glad you liked them!

Time to Re-Tire?: A pair of Dunlop service vans from different decades, both will end up as cabinet background and/or diorama use.

1970 Mercedes Benz LP 608 - Premium ClassiXXs: Using this as the basis for several other liveries, Premium ClassiXXs capitalized on the opportunity to utilize their diecast tooling for this truck. Vans like this were common place in race paddocks as tire support and distributors of racing tires to competitors. This light-medium duty truck was introduced in 1965 and bolstered Daimler-Benz presence in the commercial vehicle field. Within a short period after introduction, the LP 608 had captured 45% of its market and the fact that it could haul more than its competition (4.5 tons), forward cab and ease of operation made it a market success; which in turn spawned bigger Mercedes trucks based on the same design. Powered by a direct injection diesel engine of four-cylinders, the LP 608 produced 85 hp. It wasn't going to get you there in a hurry, but it would get you there!

1962 Mercedes Benz L 911- Premium ClassiXXs: Mercedes 911 series trucks were certainly not confused with a German sports car with the same name, although its possible they may have hauled a few! The L 911 is a medium duty truck produced by Mercedes Benz from 1961-1984. All the L 911's had a six-cylinder diesel engine and a five-speed manual transmission. Up to 1963, the trucks had a 4.6L engine rated at 100 hp. From 1963-64, the engine capacity was increased to 5.1L and power increased to 110 hp with direct fuel injection. From 1964 on, the trucks had a 5/7L engine and power remained at 100 hp, but with an increase in torque and slower operating RPM, thereby increasing fuel economy. The trucks were given a face lift in 1967 increasing the frontal glass area and improving visibility, but maintained their "short bonnet" look with the engine protruding part way into the cabin. Two more very nostalgic vehicles Jerry. Both were ubiquitous here and considering their age it's remarkable that so many survive. I'm pretty sure that I've shown examples of both in the sightings thread. Very tempting, must resist.
My collection
Top

The LP 608 is a bit of a favorite and I bought it for exactly the same reasons you did.
“Racing is life. Anything before or after is just waiting.” - Steve McQueen
Top

Probably the first large transporter used by Scuderia Ferrari, this transporter was used by the Scuderia in the early 1950's in various color schemes. This is how the transporter appeared in 1950. The Alfa Romeo 800 was a heavy truck capable of carrying up to 8 tons as its name suggests. Powered by a 8.3L 6-cylinder diesel engine producing 128 hp, the truck was capable of a top speed of 31 mph. Probably fast enough for the back roads of Europe at the time. Produced between 1940-47, it was replaced by the 900 with slightly larger engine and capacity. Ferrari probably purchased the truck used and either had the van body constructed or it came with the van. I am not sure what Biscara means, a Google search was inconclusive. There are references to horse racing and could it be possible this was a converted horse van? The name of the coachbuilder? Incredibly cool Jerry, and your mise-en-scene makes it even better.
My collection
Top

Easily the best transporter I have seen.
Martin
Top

That’s a treat Jerry, and it’s not even Christmas.

I see Tron make several variations. Are you intending to add more, or stop after this one ? I could see how one might be enough, but alternatively that they could become addictive and you want all of them.
“Racing is life. Anything before or after is just waiting.” - Steve McQueen
Top

Easily the best transporter I have seen.

I am pretty much in alignment with Martin here.
Jeff

Easily the best transporter I have seen.

I am pretty much in alignment with Martin here.

I see Tron make several variations. Are you intending to add more, or stop after this one ? I could see how one might be enough, but alternatively that they could become addictive and you want all of them.

All I will admit to, is that as far as my wife knows, this was a purchase of "construction" materials. While I would like the other variation or two I have seen, I don't think budget wise it will happen. I justified this one because I am under budget on my shop/garage project.

I am not ashamed to say, it is a dandy!

Conversions Ahead!: I bought these two trucks with the idea of making them conversions down the road into racing related service vehicles. Both cheap Altaya parts works models with nice detail, I saw several possibilities when I came across them.

1957 Fiat 615 N: Ian's recent post of a Ferrari diorama elsewhere on the forum sent me looking for a possible candidate to make a spares van that would have been used by the Scuderia in the 50's. I first came across two of these trucks by iv-models in both Ferrari and Alfa Romeo livery and while outside my price range, sent me on a specific path to look for one of these trucks. It will be awhile, but eventually I will strip down this truck and repurpose it as either an Alfa or Ferrari support truck. I should do both! Produced between 1951 and 1965, the Fiat 615 N was a popular light truck of modern design with no real competition in the Italian market when it was first introduced. A 1.5 ton truck with a four-cylinder diesel engine that produced 40 hp and could propel the small truck to a top speed of 50 mph. Perfect for light deliveries, hauling racing spares, fuel, etc. the 615 N was produced in flatbed, box container and van versions. iv-models uses a slightly older version of the 615, but the slightly newer version will work out just fine for either one or both of these conversions. 1960 Berliet GBK 75: When I first saw this truck, my immediate thought was race transporter! More particularly Ligier since it is French. Spark just announced the Ligier-Maserati transporter used to haul the JS2, which was what I particularly had in mind. This truck could lend itself to a variety of paddock applications. Introduced in 1958, the GBK was a modern design of medium to heavy duty trucks built by Berliet. They were designed to providedriver comfort and greater visibility through its wrap around windscreen and flat front with the cab over design gave the driver increased maneuverability. Powered by a 6.3L four-cylinder diesel engine that produced 120 hp, the GBK was produced as a cab and chassis, with many configurations including fire trucks and military applications. This is a van body built on the GBK 75 chassis for a French moving company. Berliet was sold to Michelin in 1966 and was sold again to Renault in the mid-70's when it was consolidated with Saviem. Now that Spark has announce the transporter I was thinking I would convert this to Shell livery, which might make a nice change in race support vehicles and an impressive display piece!