As below
You do not have the required permissions to view the files attached to this post.
Top

The first add to my collection this year is a truck. In fact, the next two coming to me are trucks as well. This may be the year of the truck for me!

I happened to find a Louis Surber transporter for sale here in the USA. I was surprised given the connection to Aryton Senna and McLaren that this would have sold for much more, but there were only a couple bidders. Such is the way with F1 here in this part of the world, just doesn't have the following it does elsewhere. So my gain.

The 1991 International Truck of the Year, the AE Magnum was introduced in 1990, continuing in production until 2013. It was powered by a 503hp Mack turbo-diesel engine and is the first semi to have a mechanically separate cab and engine compartment. Here it is hauling the McLaren works F1 team with Aryton Senna repeating as World Drivers Championship in 1991 and McLaren winning the F1 Constructors Championship in both 1990 & 1991.

I have finally gotten around to putting my racing transporters and support vehicles on one web page. Still very much a work in progress, but if you care to look, here is the web address: https://www.oldirish.com/collection/truck.html
Jerry
Old Irish Racing
www.oldirish.com

Nice find and as always, an excellent way of presentation. When you scroll down on your website and see ALL those trucks in one place they look massive! Good job!
"A picture is worth a thousand words, but a model is worth a thousand pictures." Harley J. Earl
My concept car 1:43 collection: viewtopic.php?t=1096
Top

I've never gotten used to the looks of the Magnum, but in your diorama it looks as good as it can. Your presentation really lifts these to another level.
My collection
Top

Great score Jerry. Interesting that they couldn't put 'Malboro' on the car, but they could put it on the transporter?

I've bookmarked your transporter page to come back and have a closer look when I have more time to enjoy it.
“Racing is life. Anything before or after is just waiting.” - Steve McQueen
Top

That is a phenomenal collection of motorsport vehicles. The displays on the web on your webpage are fantastic - well done that man. My favourites I think are the Jaguar team and the TWR Silk Cut team. PS, I loved the footnote about Tobacco on the webpage - sucking on an exhaust pipe lol

Jager wrote: ↑
Sun Jan 17, 2021 6:26 pm
Great score Jerry. Interesting that they couldn't put 'Malboro' on the car, but they could put it on the transporter?

I've bookmarked your transporter page to come back and have a closer look when I have more time to enjoy it.

Now that's an interesting question I hadn't thought of. I wonder if when they went to events where tobacco advertising was banned on race cars, if they had to cover the transporters, or if this is one of the exemptions Bernie carved out. I couldn't find a definitive answer. Thanks again Ian for your website feedback and ideas!

Thanks Martin! You will also like the next one I'm sure.

SpeedCat71 wrote: ↑
Sun Jan 17, 2021 6:34 pm
That is a phenomenal collection of motorsport vehicles. The displays on the web on your webpage are fantastic - well done that man. My favourites I think are the Jaguar team and the TWR Silk Cut team. PS, I loved the footnote about Tobacco on the webpage - sucking on an exhaust pipe lol

Thank you and the Jaguar transporters are some of my favorites. I need to get busy and make the Silk Cut support truck to go with the two transporters. Its my goal to someday replicate that team picture! Ah, the disclaimer. That came about from an exchange of nasty emails a number of years back I received from the mother of a young lad that apparently found my website. While I thought it was better than the kid looking at porn, his mother (I think we would call her a 'Karen' today) was in high lather over the fact that there were pictures of cars with tobacco and alcohol advertising (heavens!) so, the disclaimer was born. You've been warned!

Tom wrote: ↑
Sun Jan 17, 2021 2:31 pm
I've never gotten used to the looks of the Magnum, but in your diorama it looks as good as it can. Your presentation really lifts these to another level.

Thanks Tom. None of the modern trucks have the visual appeal of older rigs in my opinion, but they are more economical to operate and that is better for all of us. The innovation of separating the cab from the engine compartment made the trucks better for the drivers. Cooler cabs and less noise. As one that has driven old semi tractors will tell you, that's a good thing too!

Paulius43 wrote: ↑
Sun Jan 17, 2021 2:18 pm
Nice find and as always, an excellent way of presentation. When you scroll down on your website and see ALL those trucks in one place they look massive! Good job!

Thank you sir! I didn't realize when I started how large a project it would be (still is).

The Long Haul: A new trio of trucks from IXO has arrived. I took advantage of a sale to pick up a transporter I was sitting on the fence about, as well as two new IXO releases (here in the USA anyway) that I plan to do some conversion work with. If nothing else, I like the big rigs and IXO has done a nice job on replicating rigs that were common on our highways forty years ago.

Kenworth has been making trucks since 1923 and has been a subsidiary of PACCAR along with its sister brand Peterbuilt, since 1945. The K100 Aerodyne introduced in 1976 featured the first manufactured sleeper cab that allowed full stand up capability. Despite sometimes being difficult to climb out of, cab over designs were popular up until the late 1970's, as length restrictions limited a tractor and trailer combination to 65 feet (19.8 meters). Powered by a 14.6L 6-cylinder turbocharged Cummings diesel producing 300 bhp, these massive tractors were once a common sight on American roads. 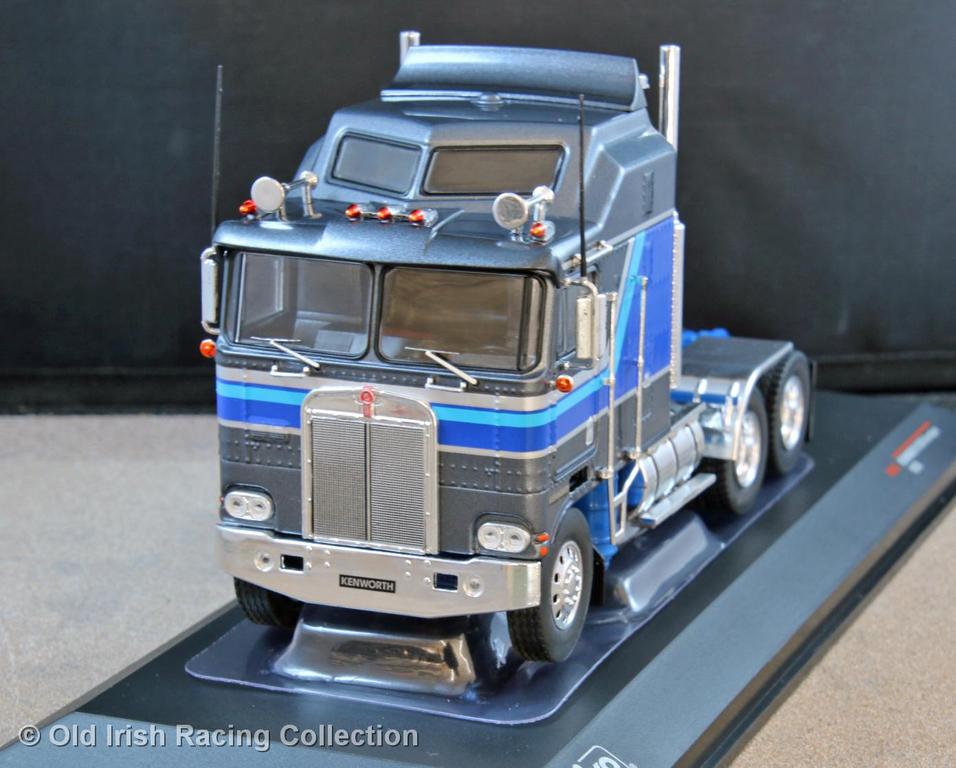 I don't have any immediate plans on what to do with this big truck, I just thought it was cool! 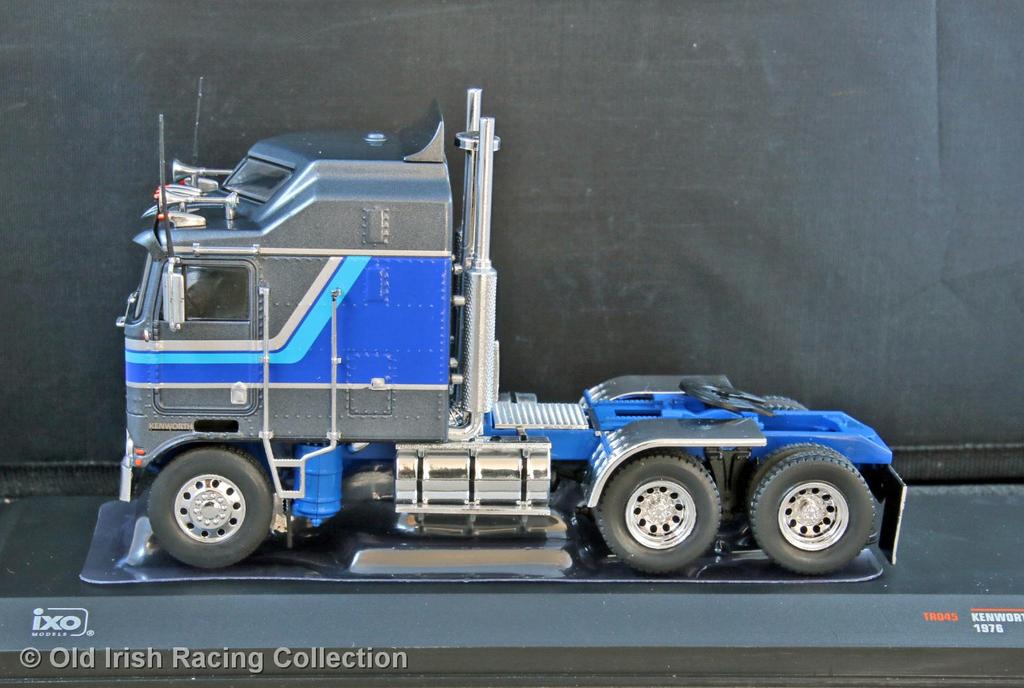 Even though the length of a tractor trailer semi combo had been increased to 74 feet, cab over trucks were still popular for their greater maneuverability; especially on short hauls and delivery work. The 352 model was built from 1959 to 1980 and was Peterbuilt's first cab over truck. Originally equipped with a Cummings 290 hp diesel engine, the tractor was noted for its torque, an important feature when pulling loads up hills and mountain passes, when the top legal truck speed in the USA was still 55 mph. Like many cab over trucks built after 1976, it features a shorter chassis to maximize rig length in keeping with new longer overall length regulations. 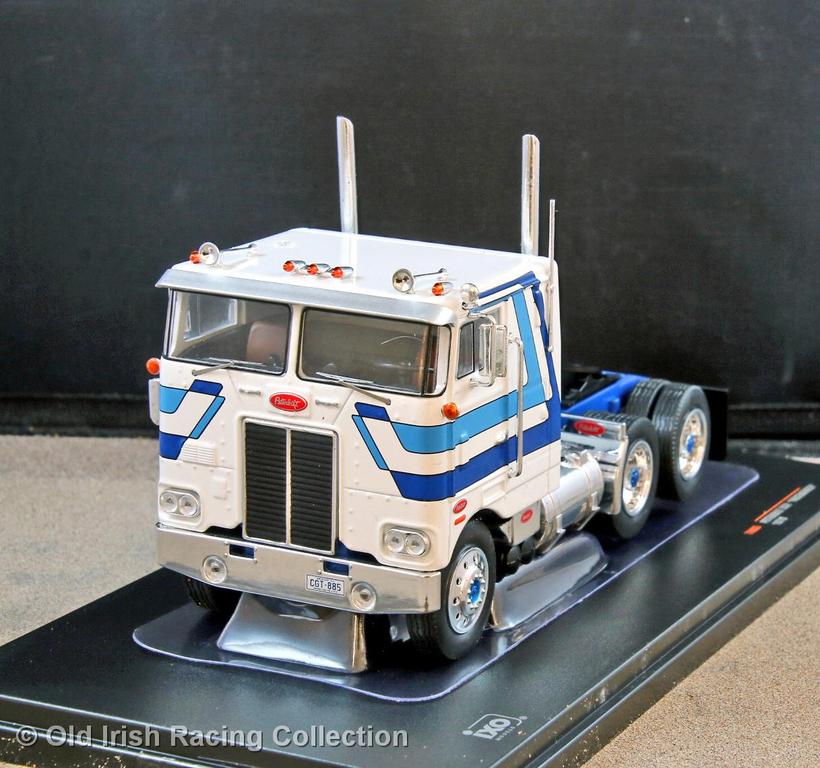 Carroll Shelby has owned the West Coast USA Goodyear racing tire distributorship since the early 1960's. Every year at the "big" races at my home track, Portland International Raceway, a Shelby tractor trailer rig would be there for tire service. This tractor will likely be the basis for a rig replicating the Shelby tire rigs I saw in the race paddock in late 70's, early 80's. 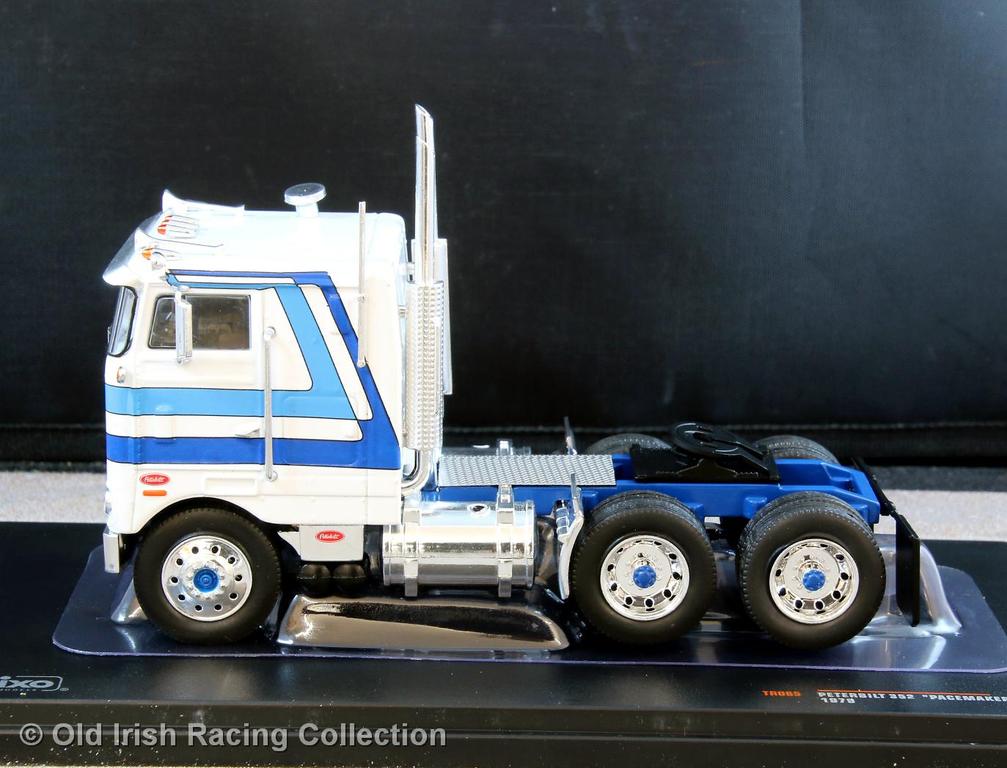 I sat on the fence with this one. Did I need another variation of the Brabham transporter used in the 1976-77 F1 seasons? The temptation was too great when it came on sale. However, on closer examination, I realized that the transporter I already had was not from the Brabham era like I originally thought, but from the early 1990's BTCC and ETCC era with the Alfa 155's. Doh! 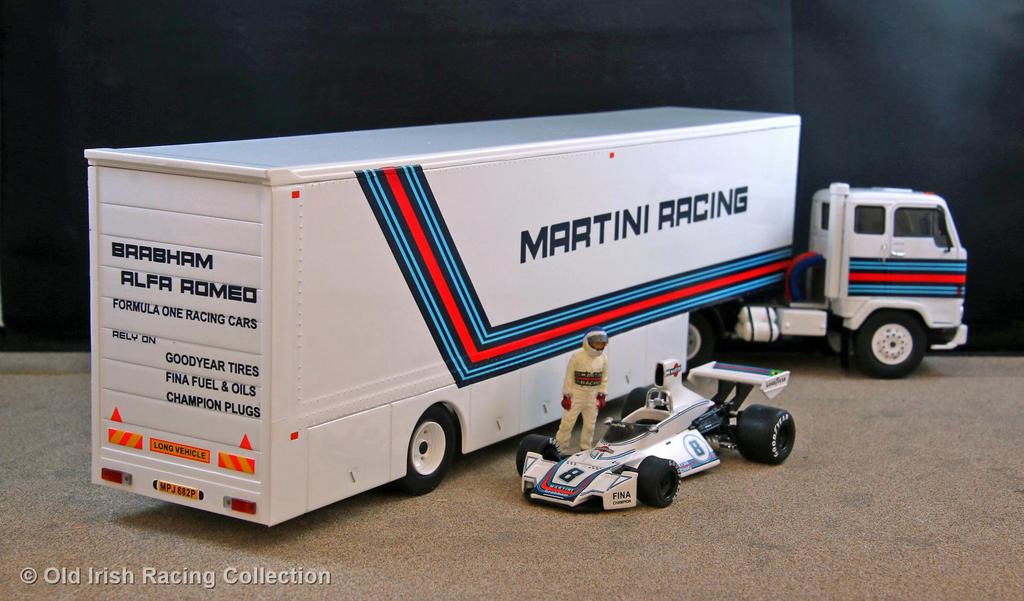 IXO has utilized the Volvo F88 tractor (trailer too?) from its earlier release of the 1978 Lotus transporter. I haven't come across an image of the Brabham transporter from that era yet (haven't made a diligent search), but assume the Volvo could be correct, just not certain. The Bernie Eccelstone owned Brabham team used Alfa Romeo power through the 1979 season, the team sponsored by Martini, although in later years, the cars were red with the famous blue Martini striping. Likely the transporters changed color then too, as well as when the primary sponsor became Parmalat. Below is the later Alfa transporter from the early 1990's and that transporter already in my collection (need to change the cars!

I've been looking at all three but decided that someone here would buy them so I could enjoy vicariously.

Excellent, I like Ixo's trucks a lot. Amazing VFM.
My collection
Top

You'll excuse me for skipping past the US-iron to get to the Martini equip Jerry, I'm trying to avoid too many transporters, but the Martini-Alfa one looks good.

(Having said that I did go back to the Kenworth/Peterbilt cabs - not my collecting or knowledge area, but impressive nonetheless)
Martin
Top

There's been a bit of discussion on the forum in the past about the IXO Brabham-Martini transporter. IXO took a few shortcuts, but it probably wouldn't have been economic to do a one off casting just for this truck:

I'd say if you got it for a discounted price you'd be pretty happy with it.
“Racing is life. Anything before or after is just waiting.” - Steve McQueen
Top

I have been to the Kenworth factory and impressive is not a good enough word to describe it. It is on such a large scale that I do not have words to put it in perspective. While the GM plants I have worked in are larger, the scale of the KW plant is awe inspiring.

The Cabover design was so popular for decades but now is almost non existent. A fleet operator cannot have them because they will bot get any drivers to work for them if they have to drive them. They are despised by drivers today, they want the stretch out room of the conventional cabs.

The IXO trucks are outstanding and I would love to have almost everyone I have seen. But that is impossible. Any semi truck buying that I will do is going to be 1:64. Like Tom I can only enjoy the purchases of others.