In the beginning, I was very surprised in a good way with that release by Ixo: 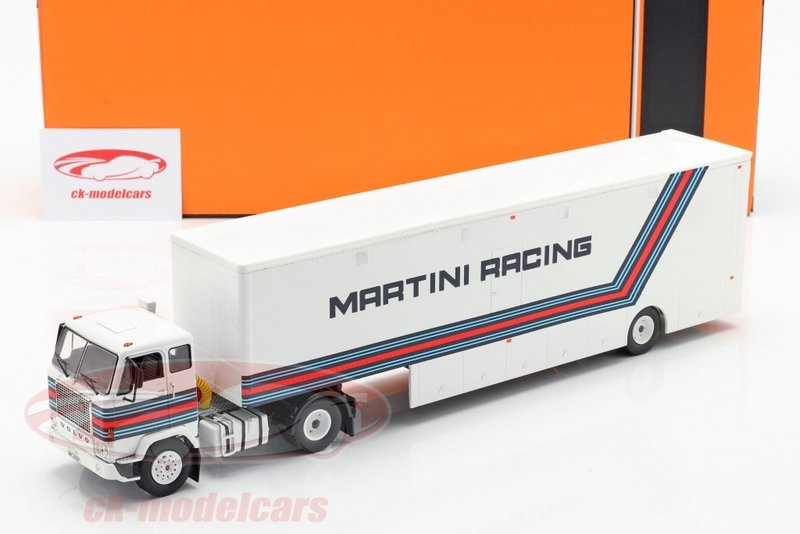 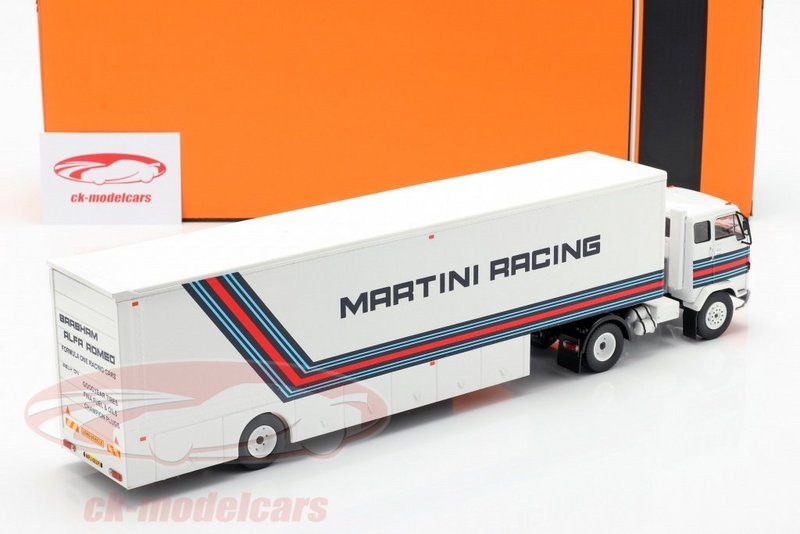 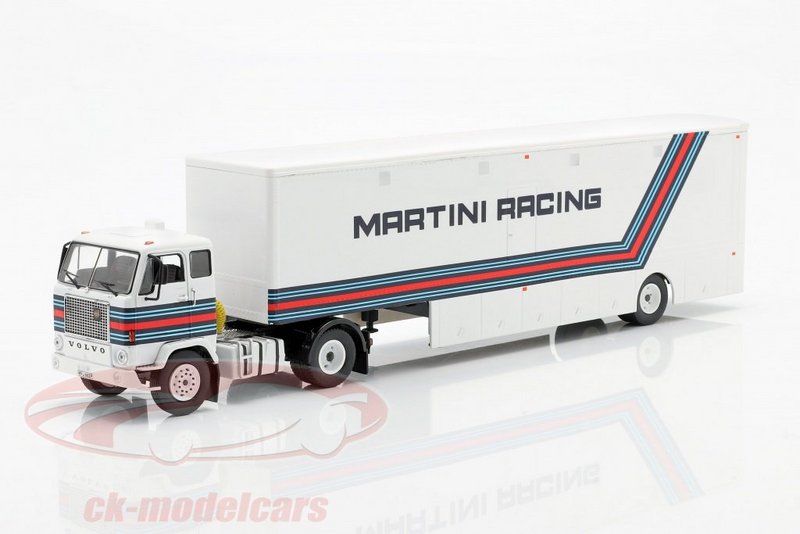 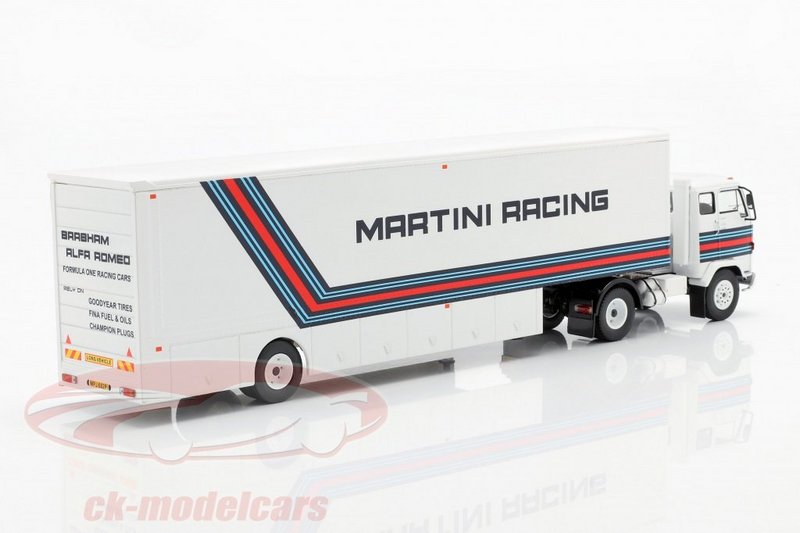 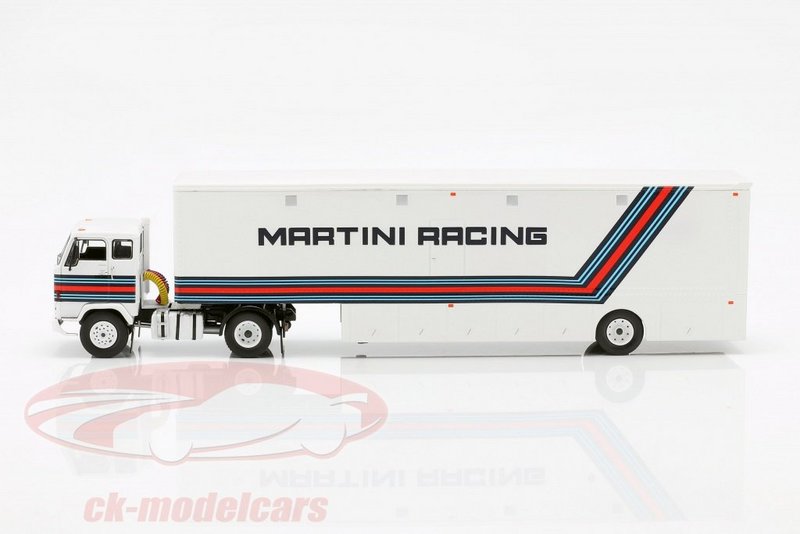 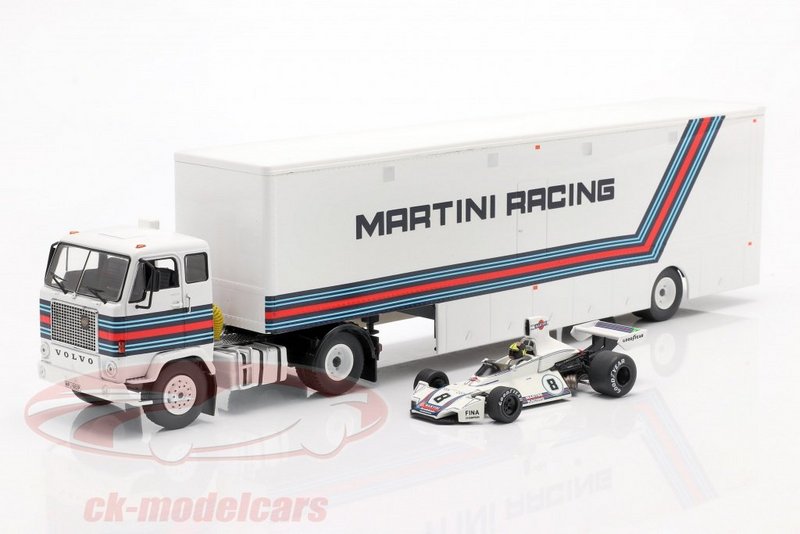 The truck according to Ixo's website was used between 1974-76.

The last picture above is not historically accurate according to my research. The trailer back door says "Alfa Romeo", but the team only used that engine from 1976 onwards. The car next to it is the 1975 version with Ford engine. It's easy to distinguish both engines by the color of the car. After the team switched to Alfa Romeo, the cars became red.

There was in fact a white Brabham version with an Alfa Romeo engine only used in the pre-season tests before the 1976 season start, so I think it should be the best car to fit this transporter in my opinion, both from time-period correctness and aesthetically perspectives: 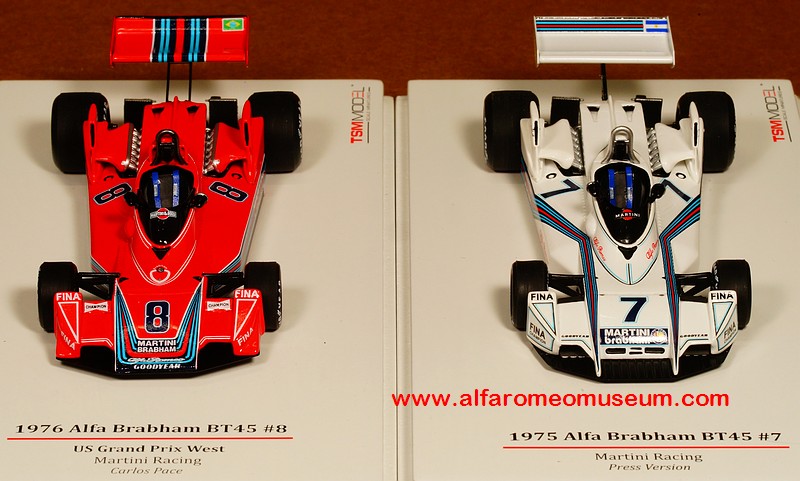 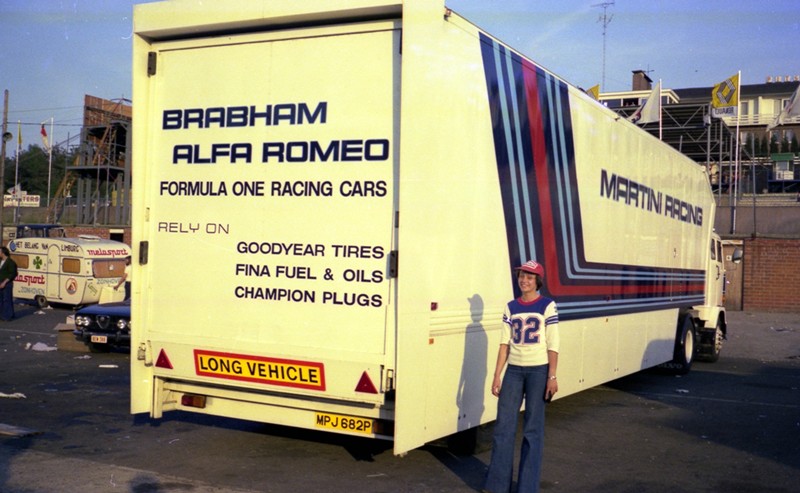 The decoration and the model are real according to the picture above, but it seems that there is a flaw in the trailer design. The front of the trailer, just behind the cabin should not be 90º vertical.

The trailer shape is better reproduced in the custom scale model below:

Research does not seem to be Ixo's strong suit... or more probably they used an existing casting. Still an attractive model though.
My collection
Top

Tom also spoke for me here.

When IXO were getting slammed for using the inaccurate cab on the Kremer transporter, someone from IXO's management posted on a French forum that in order to release these at a reasonable price point, they had to make do with using one of their original castings. To tool up a new cab just for the transporter meant there wouldn't have been a transporter.

I suspect its the same here. Yes they could tooled up a special trailer just for this model, but it probably would have pushed the price up $50 and sales would have suffered as a result. I know its frustrating when something isn't what it should be, but maybe its better than nothing at all ?
“Racing is life. Anything before or after is just waiting.” - Steve McQueen
Top

As long as it's not a stupid spelling error like on the Almeras transporter it's a matter of like it and buy it, or leave it. I could live with it but I'm not a vintage F1 collector...
My collection
Top

Thought you might like to see a different version of the Brabham Martini transporter I have in my files Bruno. I'm not sure where I found this, but I wonder if the Ford cab relates to the Ford engines?

That's an L reg, older than the P reg in the earlier picture.
My collection
Top

This! And that's the exact same reason why Minichamps keeps recycling thesame castings over and over again. Casting is expensive, if you're not able to sell thousands, you can't even cover the costs of a brand new metal mold. Tooling for die-casts can cost over 100.000 dollars for each model

It's a matter of deciding if you can live with it or not. If you can't, there's always the option to buy the model and update the model yourself.


Jager wrote: ↑
Sat Jun 27, 2020 11:47 am
Thought you might like to see a different version of the Brabham Martini transporter I have in my files Bruno. I'm not sure where I found this, but I wonder if the Ford cab relates to the Ford engines?

Thanks for sharing, Ian. I've never seen this truck before, I can only imagine what else you could have in your vault.

This is a Ford C-Series, it was a common sight at the paddock among F1 teams. The Copersucar-Fittipadi team had a similar model used in the European races.

It's also an interesting photo because the decoration suggests thispicture was taken in 1975, since Brabham didn't have the Martini Sponsorship in 1974 and they droped the Ford engines by the end of 1975. Generally speaking, the major F1 teams in the mid-70's had at least two diferent transporters for the European races. While one of them was dispatched to a race, the other one was at the factory already being prepared for the next race. Since Ixo suggests that the Volvo was used from 1974 to 1976, perhaps they had these two transporters in 1975 to support the team in the European races.

I can see that there is another transporter just behind, but I can't tell from which team it is nor the make/model. The trailer side skirts suggest it's the Volvo, but the decoration and the shape atthe front of the trailer are different. Perhaps it's a picture taken early in 1975 and it still had the 1974 decoration.
Follow me on Instagram @brimportcollection
Top

I think also, IXO uses a production form for this model so that the costs are low.
The Lotus transporter of the same type that was offered some time ago also has various inaccuracies to the original.
It's a model of the Volvo F88, but the Lotus team used the F89 in 1977 and 1978, right?

In the picture you can see a Volvo with a wide grille - only to be found on the F89 ! 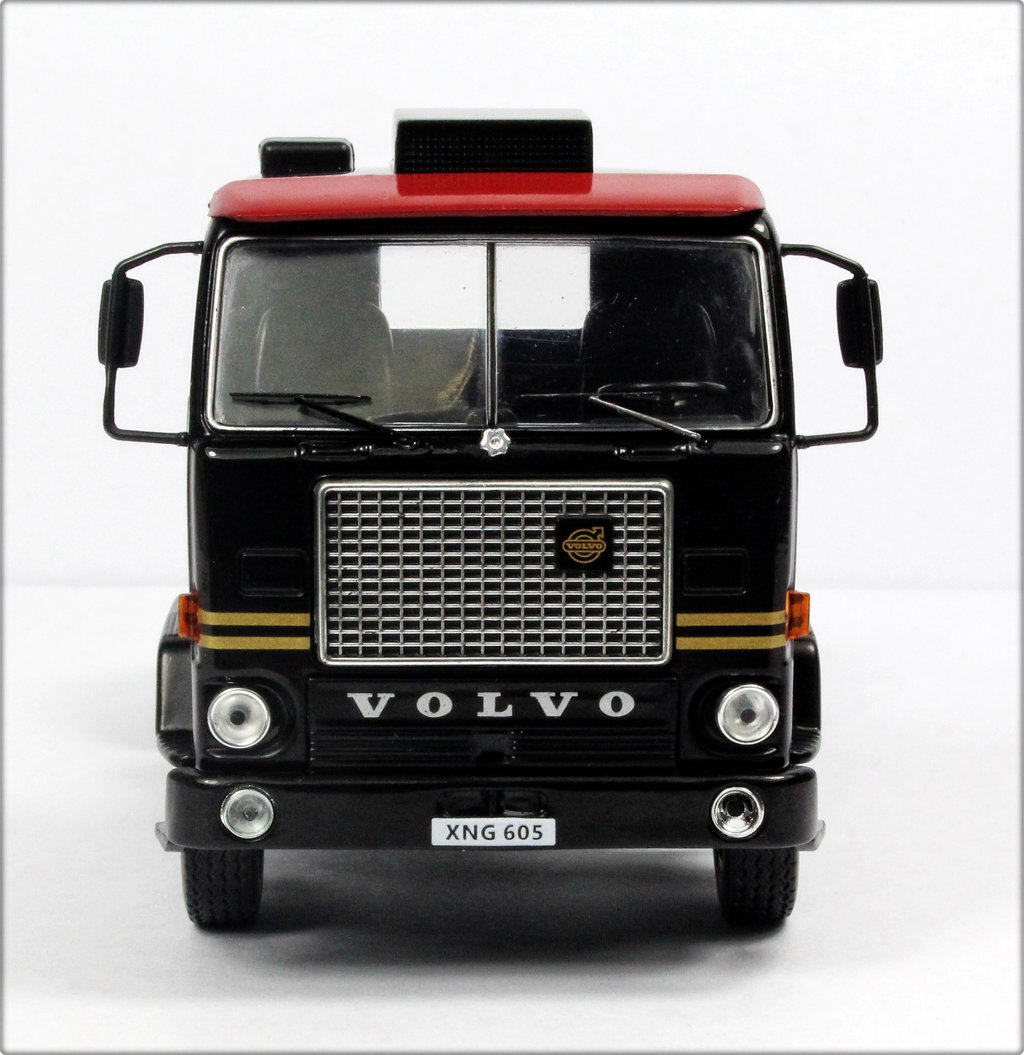 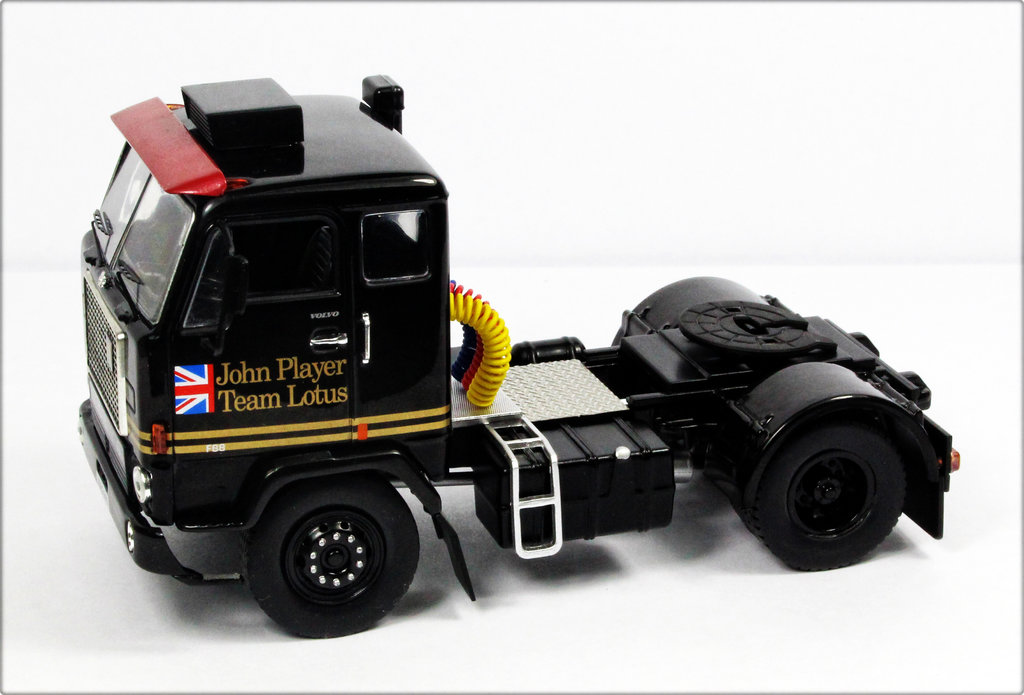